Andrea Lazzari | Venice | Milan. Made in Italy.
Andrea Lazzari | 1991. Graduated at Istituto Marangoni.
Plùs Que Ma Vìe is a high-range, miscellaneous Prêt-à-Porter constantly searching for new formal solutions and with a strong expressive personality, which was born between Milan and Venice in June 2013. Plùs Que Ma Vìe has the aim of creating a new collective imagination and a unique style, which summarizes, in an exclusive essence, characters of minimalism, concept design and clean lines.
Plùs Que Ma Vìe aspires to renovate the stereotype of classic menswear, by varying shapes and sizes and by looking for a new elegance without laying any expressive boundaries.
The entity of the Brand is enclosed in the idea of proposing a product that best represents progress and futurity, without neglecting the formalism and sartorial elegance of classic apparel.
Black: predominant element and color of each collection; all the other colors rotate around it, but the latter refuse to be excessively strong in order for a constant and clean aesthetic to be kept. A careful choice is made regarding the fabrics, which must be for the most part natural and free of synthetic components.
The purpose of Plùs Que Ma Vìe is to use formally classic textiles in a variety of contexts, to alter their functionality and to create a new trend dimension. In order to develop this great contrast between formal and experimental, a strong research is made in the world of technical textiles, which are used together with high-tailoring fabrics.
The target of the Brand are customers in the age range of 25 to 40, wealthy and belonging to the upper medium social class.
Plùs Que Ma Vìe showed both in Milan and Paris in June 2013 as the winner of the Best Menswear Brand Award at Marangoni Institute.
The first official collection – Bauhaus – was presented in August 2013 at Moroshka Fashion Week, in St. Petersburg.
The second collection, Fall Winter 14|15 “Labyrinth”, showed in January 2014 at Copenhagen Fashion Week -CIFF-.
Between the two collections, Andrea Lazzari has worked as a fashion designer at Maison Frankie Morello Milan.
Labyrinth was then presented, in June 2014, at FashionClash in Maastricht. Thereafter, the designer began working on the Spring Summer 15 “Aquarium” collection, which was officially presented at Damasco Showroom in Milan, in June 2014.
Aquarium was then presented at Vancouver Fashion Week in September 2014; in October 2014 it first showed at Lisboa Fashion Week, Moda Lisboa, and lastly at Serbia Fashion Week.
At the same time, Plùs Que Ma Vìe became the official style consultant for Hide & Jack Italian Flag company, from November 2014 to December 2014.
Plùs Que Ma Vìe then presented the Fall Winter 15|16 collection at Bureau Seutail Paris Showroom and at Tranoi Homme Tradeshow during Paris Fashion Week in January 2015.
Plùs Que Ma Vìe also participated at the LVMH Prize & Designer for Tomorrow in February 2015, and at WhoIsOnNext? 2015 in March 2015.
Since April 2015, Plus Que Ma Vie started a B2B project with ONLY T-SHIRT Group; LA2VIE VENICE, a Luxury menswear and womenswear bomber jackets brand, was born from the partnership.
Plùs Que Ma Vìe showed the Fall Winter 15|16 collection at Serbia Fashion Week in April 2015.
The New Venice Spring Summer 2016 collection was presented at Spring Up Showroom in June 2015, and at Ningbo Fashion Week later in October 2015. 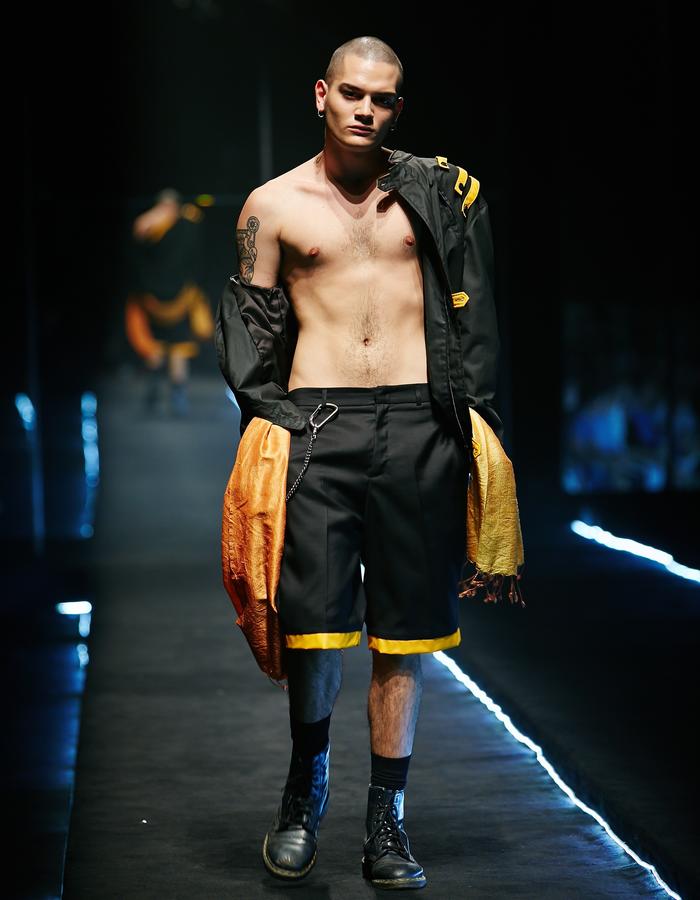