Oisín Hunt is an Irish fashion designer living in Dublin.

During his education at the National University of Ireland where he received a BSc in Business and Management.

During that time he worked side by side with a prestigious tailor in Dublin City. In 2013 Oisín started his first brand. Dog Eat Dog (D.EA.D) which he used as an alias name to work and sell under.

After a year in New York, Oisín moved to Berlin and released A/W '15.

In 2017, Oisin has rebranded and decided to move forward under his own name. 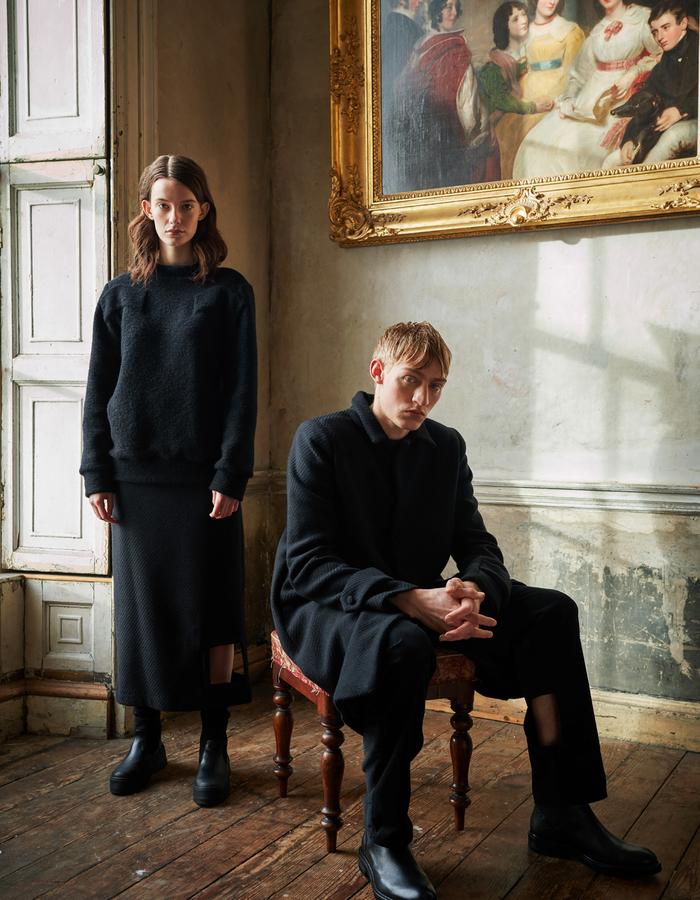 This collection is inspired by the Houses of Henrietta Street in the Inner City of Dublin, Ireland.

For AW19, we wanted to primarily focus on the Tenement years in Dublin which are sadly forgotten about or not talked about in history classes in schools. The narrative and theme of this collection focus on a Man and Woman who would be have been living in the building during those years.

The positive space paneling of the coats and jumpers are shapes inspired by one large bedroom in 14 Henrietta Street which was split into 6 rooms to accommodate overcrowding at the time. The negative space paneling of the skirt is a continuation of Oisín’s exploration into this theory which is a reference to his AW18 and SS19 collections. The splitting of the Chesterfield coat with a mesh lining pressed over the Coated Gaberdine bespeaks the thinness of the bed covers in the rooms.

The color tones in this collection are used to simulate that of the times and to complement the historical walls and rooms within 14 Henrietta Street and 12 Henrietta Street.

The focus on Irish made fabric sourcing and fabric composition are used in order to replicate that of the times. All Wools and Coated Cotton are from Ireland while the Denim, Jersey, and Viscose are from Japan.