Ukrainian Brand
already well presented all over the world
and developing at an exponential rate
sharing combination of deep Ukrainian traditions
with a reflection of modern life.
Philosophy
Guardian Angels ...
Ethnic symbols – that are not on the surface,
but in the sacred heart of the creation.
This is a something real, viable, the source
of energy and strength ...
Sails ...
Sail full of wind ...
Rapid gentleness that carries forward,
but at the same time is light and easy.
Wind – changes, movement, development,
mood, fashion.
Depiction of the world around ...
Perception, association.
Sea, the waves that bring good changes.
Nature – the eternal and perhaps the most fragile
and thus the most valuable.
Transparency, weightlessness, ephemeral,
tenderness, but at the same time something real and materialistic.
Exceptional, extraordinary,
but a harmonious part of the society.
Arts-object in your life ...
Brand’s history, awards and recognitionsCreated in 2008
2008 -2017– Ukrainian Fashion Week, Kyiv
2008-2013 – Le Showroom during Paris Fashion Week
2007-2016 – Holiday Fashion Weeks
in Dubai, Greece, Georgia, Odessa, Jordan, Ibiza.
2013 – Salon Luxury Vendome at Le Maurice during Paris Fashion Week
2010 – Fashion presentation in the NATO headquarters in Brussels, Belgium
2009-2014 – participant of the biggest trade show in Paris “Who's Next “
2012-2016 cooperation with the glamorous showroom in Beverly Hills
"Fashion Forwards"
2012 and 2013 participant of the showroom during Cannes Films Festival
2014 – represent Ukraine at the Word Fashion Week , Paris, France
2014 -2019 – cooperation with the MF Showroom during Paris Fashion Week
2015 USA Charity Fashion Marathon
(Philadelphia, New York, New Jersey, Chicago, Washington)
2016 -2021– Olena Dats’s dress was selected as a Ukrainian modern art object for the ’’Ukrainian Windows’’ exposition in the Ukrainian Institute
of USA in New York.
2017-2020 – L’viv Fashion Week Designer Olena Dats’
Born 1978 in L’viv, Ukraine
1984-1995 – L’viv Secondary School #4 specialized in English
1995-2001 – L’viv Academy of Arts, Fashion Design department.
2008 – owner of the brands “Olena Dats’’’ and “Olena Dats’ Gallery”
2012 – Women of the lll Millennium Award
2016 – 500 the most influential women of Ukraine awarded by a Woman Magazine
2016, 2017, 2018, 2019 – “50 the most successful women of L’viv region” award by Ria Magazine
2021 – honored to be on the pages of “Galytslyi Piemont” catalogue 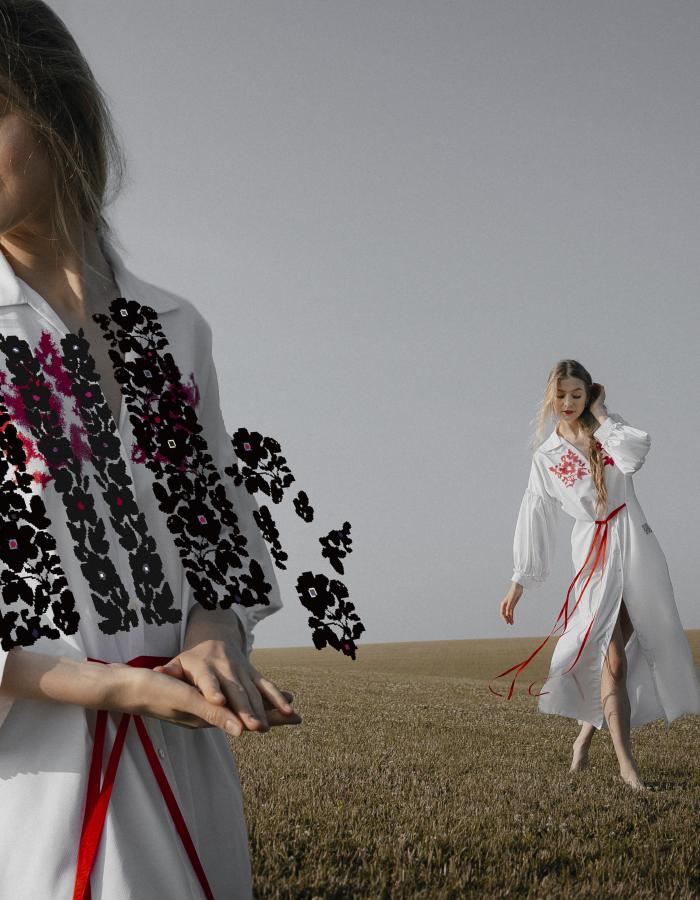 Ukrainian vyshyvanka, Ukrainian symbols, Ukrainian ornaments will always be filled with greater meaning. One that you cannot see on the surface, but the one that reaches incredible sacred depths. This blouse is a chest waiting to be opened to reveal its secrets. A chest that preserves family traditions and treasures, bringing together the past and the future. This blouse is the personification of the immense universe that unites the virtual and the real.
The blouse was created using Augmented Reality technology by FFFACEME studio for the Olena Dats' brand. By following the link on the blouse, you will also become the owner of a virtual 1920s vyshyvanka of Borshchiv region from the private collection of the designer's family.