Growing up asian, I was expected to become a lawyer or a doctor, so I concentrated in academics for I thought it was the only way my family would accept me; however it was not meant to be. Early 2016, I had a trauma and I can no longer obtain objective memory, leading the death to my family's dream for me.

It was a blessing in disguised; for, clothed in haze, was the opportunity for me to pursue my first love- Fashion Design. So here we are, I am a sustainable designer with the goal of moving my clients with stories I tell through my clothes, encouraging them to be idiosyncratic and inverting the negative effects of fashion one upcycled garment at a time. 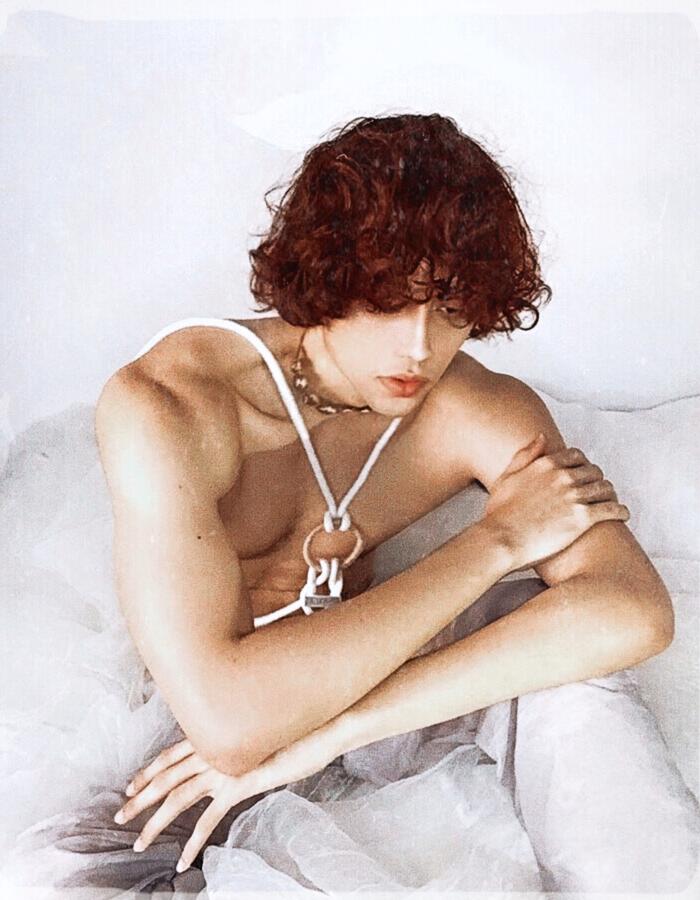 Love, though often used, is a word understood without even an utter of all senses, however as society accepts a certain norm dictated by an archaic modest tradition written in an outdated book- to love means to follow a certain law of who to love. Influenced by the normalcy of the Erastes’s (the Lover and Mentor) love for the Eromenos (the Beloved and Apprentice,) this collection will take us back to ancient Greece when Romantic Love was typically between two consenting males yearning for growth, discussion and knowledge, an example would be the love of Socrates (Erastes) to Plato (Eromenos).

In Eromenos: Loving the Beloved, I try to replicate that sense of love and the eagerness, experienced by his Lover, to groom someone to become his protégé through images of young men beaming with vulnerability and innocence achieved by combining elements of the modern day private school uniform’s button-down, pants and boxed skirt to the ancient Greek’s Chiton, Chlamys and Fibula using White Bed Sheets, Upcycled Damaged Draperies, Linens, Cotton and Thin Taffeta.

Other than normalizing homosexual love- whether tangible or just admiration, this collection also tackles the argument when it comes to gendered clothing, as even in the Ancient Greece, women were expected to cover up as their Peplos were longer and heavier compared to the men’s barely covering Chiton. Adhering to this issue we made the menswear garments feminine (based on today’s societal standard) by cropping the tops showing the abdomen, which could also tell a story of boys growing-out of their clothes, and included skirts as accents to the pants.

To amplify the idea of intimacy the white material from the collection was made from upcycled bedsheets and fragile mesh drapery which also represents the breakability of purity. The pants were made from Linen which was also commonly used during the era and the grey marble-like thin taffeta was actually discarded by an Italian Fashion House and is rescued from the industry landfill.

The lookbook was shot during lockdown in three different places: Manila, Cebu and Greece. The Dreamy Sequence showcasing the Eromenoses’s Connection was shot in Manila by the models themselves: Angelo Sacarie Vistan and Patricio Villalobos, in their own residence and has the creative stylings of Alpha Tupas.
The Standing Presentation of the Eromenoses against a Greek City background was shot by both Taishi Arai in Cebu and John LagonIdis in Greece, and was modeled by Armand Hexon and Allen Celestine who were made-up by Joel Sarimos.