_// SYNOPSIS ABOUT THE BRAND

Founded in 2015; then later re-established in 2021, WILLIAM UTAMA is a sartorial response to the gender bigotry and oppression of third world culture and social system while intimating a sense of gender-fluid futurism. This means the exploration of the nuances of hegemonic masculinity and femininity and merging the stereotypical gender roles into a single entity. Most acclaimed for its thought-provoking radical concepts that is deeply rooted in morphed cultures which transports clothing to a realm of its own and bled far beyond garments and into the wider category of the arts. Citing influences from myriad of forces such as countercultures, rawness of youth subcultures, various eclectic contemporary art, music, above all people with strong ideals, sense of self and the courage to live by their own rules.

Representing the beginning of a new era in Indonesia fashion scene and gender-neutral clothing, the brand pushes boundaries by playing with the unconventional beauty with progressive ingenuity, without compromising the traditional values, bridging the gap between the East and West. WILLIAM UTAMA aspires to introduce its own distinctive way of creative expression through a trichotomy of traditional tailoring discipline, balanced with innovative cutting-edge artisanal craftsmanship and visible tactile in fabrications, thus paying tribute to modernity and relatively au courant result in a dreamlike deviation from the design of contemporaries.

Each piece is a unique creation that has different characters and carries a distinctive message, combined to tell a complete story and aimed at projecting voices and images. Ideas that speak the language of the current existing state of life, affairs and cultures; embodies a special kind of reconciling foreign and familiar. The brand progressively continues to establish itself as a force through challenging the status quo and defying gender stereotypes, cultural stigma and racial prejudice while building an inclusive community and cultivating a culture of curiosity and openness.

The eponymous collections are dedicated to the misfits and misunderstood, every audacious individual who is or wants to express themselves through clothes. Ultimately the best version of themselves. Neither their age, race, gender, beliefs nor occupation matters, but only their ability to comprehend clothing intellectually; They are the discerning and naturally savvy ones. Above all, attitude is everything.

With its acclaimed Hybrid ninja-esque aesthetic and dystopian undertones resembles the idea of armor, shielding through the harsh reality of the third-world. Pieces from sharp tailored coats, deconstructed jackets, hand-knitted pieces, reworked denims are designed with one gender in mind. Taking a fresh approach to familiar staples, the brand produces thoroughly wearable yet artistically tenacious detailed pieces of urban sophistication and understated ingenuity, emanating an aura of individualism and radical cosmopolitanism with underlying hints of avant-garde. 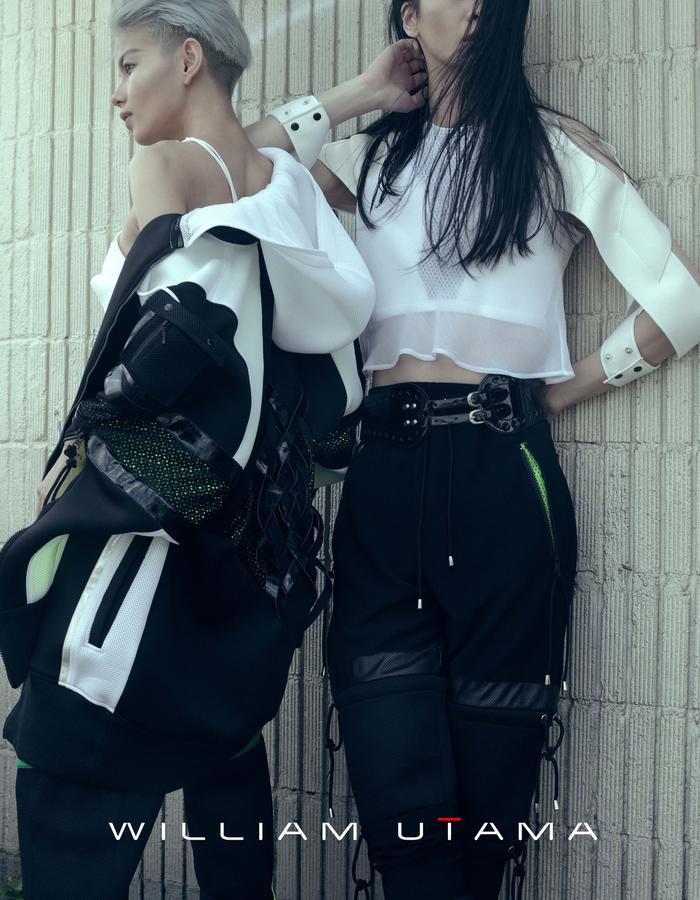 e·voke
/əˈvōk/
:to bring a feeling, memory, or picture into the mind, as well as to draw forth or bring out something latent, hidden, or unexpressed.

Through this debut collection, The designer aimed to introduce the identity and aesthetic of the brand, what the brand is all about and has to offer.
The brand represents the past, the present, and more than anything, the future.

CHAPTER 1 - EVOKE
Initially inspired by fractals. A natural phenomenon or a mathematical set that exhibits a repeating pattern that displays at every scale. It is also known as expanding symmetry or evolving symmetry. Geometrically, they exist in between our familiar dimensions.

That served as the starting point of the collection, evidently on the textile development and manipulation process. The designer experimented with different techniques and approaches in producing new interesting textiles as well as giving a new life on to the existed ones. Textiles are being created and manipulated in such ways to resemblance fractals.

In terms of silhouettes and vibes, The collection is heavily influenced by military clothing such as bulletproof vest, armored detailing, utilitarian and multi-functional pieces. Like a military cargo pants that is convertible into a utility tote bag. Injected with the essence of toughness and rawness, resulting the collection appealed to be bold, unapologetic, unorthodox yet sartorial and modern at the same time. A dichotomy of urban streetwear and athletic sportswear

The collection also speaks to a spectrum of subcultures. Majority pieces are unisex. Through this collection, the designer also aimed to break the mold of gender stereotypes.
Gender roles are social construct. When we attempt to assign strengths and weaknesses to either gender, we literally cut our potential as the human race in half.
We refuse to live up to your stereotypes. Don't reinforce the stereotypes or preconceived notions that have traditionally defined gender roles.

An Ode to Individualism.
The WILLIAM UTAMA pieces are dedicated for the bold, the liberal, the unorthodox and the sartorial.