From as early as she can remember, designer Kristin Haskins-Simms always knew she was an artist; however, navigating a career as a professional artist seemed daunting. Her road to fashion and being selected as a contestant on Project Runway’s Season 8 has been circuitous. Kristin graduated from the College of Arts and Sciences at UPENN (‘93) after majoring in English, (minoring in French). However, after working in New York for a number of years, she eventually found a love for graphic design and decided to pursue it further. She enrolled at RISD for a 3-year MFA program where she graduated in 2000. She soon started an independent graphic design studio and taught part-time at various colleges and Universities. In 2006, she started a social conscious T-shirt line called Strangefruit which was devoted to history and culture. After the success of the women's line, she still struggled with the men's. Having plenty of inventory, she decided to repurpose the men's line into women's. Through such experimentation, she developed a women's wear collection that she eventually unveiled at Philadelphia Fashion Week in 2009. With such praise, press, and sales, she was encouraged to apply to Project Runway Season 8 on a whim. She was immediately casted. With such endorsements without formal training in Fashion, she has been known for creating stunnning, unique designs taht are now being carried in small boutiques. 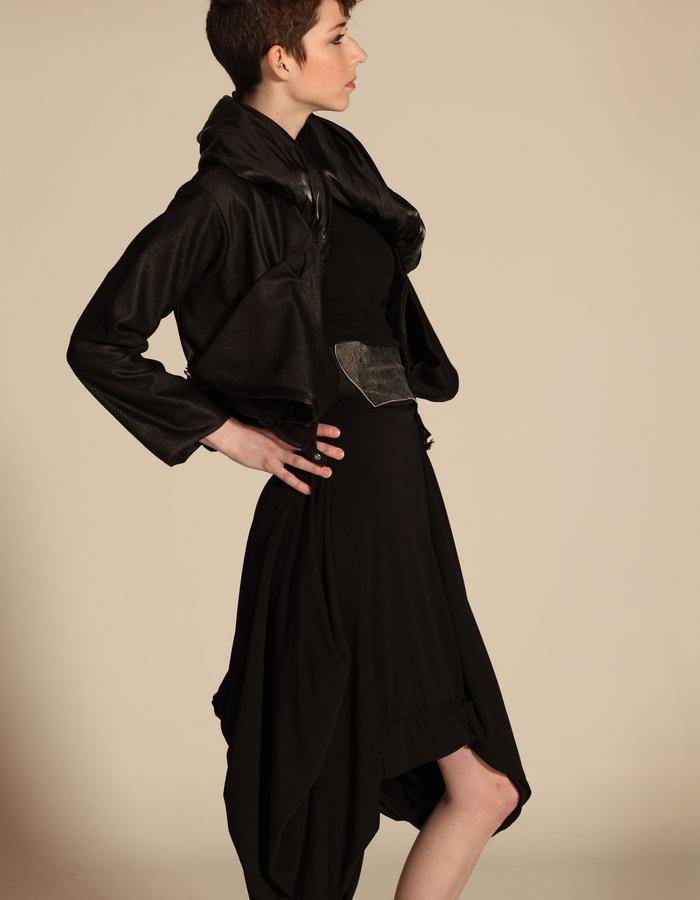 This collection was inspired by the Japanese influence on Western Art during Bell Epoque era. Comparing the paintings of artists such as Toulouse Lautrec and the Japanese u-kiyo prints. Comparing the paintings and prints, the underlying grids contain prominent diagonals and triangles which is the underlying theme in the pieces. The pieces are both structural and organic, taking cues from the intricate kimonos in Japanese prints. Together these elements make a contemporary, wearable collection.