STAŠA is a contemporary womenswear brand founded in 2015 by Croatian designer Staša Randall. Known for its minimalist, clean and geometric cuts, the label is focused on fabric quality and tailoring, bringing together form and function in every single piece. ‘Keep it simple’is the philosophy behind the clothes and accessories inspired by modern architecture, Asian fashion from the 1970s and 1980s, and 1990s minimalism. The collections are designed in London and made in Croatia.
Staša Randall, born in November 1990 in Pula, Croatia. She graduated from School of Applied Arts and Design in Pula in 2009. That same year, she enrolled in Faculty of textile Technology at University of Zagreb, committing to a textile design course. After graduating in 2012 the next path to wakes was enrolling to Master’s Degree in fashion design course. For the second year of master, Staša enrolled for student exchange program in Roubaix, France with Ensait-National Graduate School of Textile Engineering established school. Her first exhibition happened in Zagreb in 2011 at the Gallery “Vladimir Horvat” five elements. She finished in the top three at Dreft Fashion Week in Zagreb 2014, Triangle collection was awarded as to be in the top 30 Young Balkan Designers 2015 and 4sqm of Pure A/W 2017 collection was selected for London Fashion Week by Indie Faces fashion platform in February 2017. in september 2018, her equality ss19 collection was selected for london fashion week pop up shop. Since moving to London in 2015, she’s has finished internships with Gan Gan London, Mehle London and Roland Mouret as an assistant fashion designer. 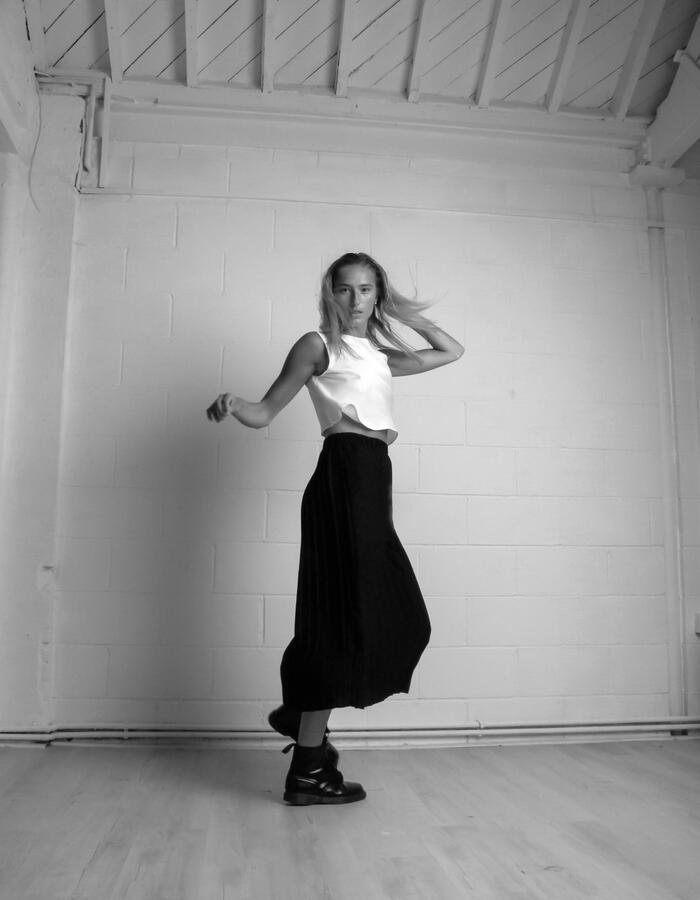 SS20 COLLECTION BY STAŠA
For the SS20 collection, designer, and advocate for sustainability, Stasa Randall, recalled all off-cut fabrics from previous collections to blend and repurpose, for a new limited-edition collection.
Each item of clothing is unique and comes in two or three sizes.
‘I find it particularly important at this time to emphasise that the entire collection is entirely produced in my London studio, located in my house. From the initial idea to the production. This has been an ideal time to inspire a new way of thinking that will adhere to a more sustainable system, as we steer towards a much needed, new normal. More conscious and considerate to people, planet and profit.’ SR 2020
The materials used in the SS20 collection are cotton, bamboo silk, viscose, and a mix of recycled polyester. Black is the most common colour and is accompanied by white, sand and grey. All fabrics in this way are given a fresh story.
The collection is purely self-exploration in the time of quarantine. While everything stopped and the big city of London was quiet, creativity was awake. The collection is minimal with a kick of edginess. Bamboo as a fashion accessory is the trademark. With 23 pieces that make 16 looks, the emphasis is placed on the shoulders and waists, to include jackets and some blouses with shoulder pads, along with trousers - all high waisted.
Photography is in black and white; raw and without editing to keep a natural and true, expression. Every aspect is organic and allowed to flow in its way. Because that's exactly how this collection became what it is.
There were only 4 people on the set at that time, shot in the UK during the period of social distancing measures slowly starting to relax. The photographer is a friend from Oslo who lives in London - Karoline Bru. The model is a beautiful athlete Lilly Douse, and hair and make-up were done by the talented Chiara Giannettino.
‘The collection represents me at its core, during three months of quarantine I found myself again and the pure love of something I enjoy and that’s creating clothes to make other people stand out and unique. With this collection, I would like to say that everyone should slow down a bit and focus on themselves and everything that is around us. Without nature, there is no us. Sustainable fashion should not only be a lifestyle but a norm in everyday life. We all saw that in a month of quarantine when everything stopped the water/sea over the world started to clear, the air was cleaner only because we stopped for a bit and slowed down.
This collection represents "a new normal” for me.’ SR 2020