Sophie Nzinga Sy, whose natural talent was developed while attending the prestigious design school, Parsons, has always been an avid art enthusiast. Senegalese born, she is constantly drawing inspiration from her travels and the fusion of the multiple cultures that have shaped her, from her African roots to her New York City education and entrepreneurial mindset. She considers herself a citizen of the world and her designs are a distinctive blend of her artistic experiences and eclectic cocktail of her voyages. Sophie’s design philosophy has remained to give the modern woman the key pieces to constantly re- invent her style while exuding confidence whether she is in a board meeting, attending a gala or traveling between New York and Lagos. In an effort to keep her brand socially conscious, Sophie Zinga is currently collaborating with ITC's Ethical Ethical Fashion Initiative. Sophie Zinga's production is 100% made in Dakar. She is currently working on her Spring Summer 2015 collection to be presented during Milan Fashion Week at the Palazzo Morando. She will also premiering the S/S 15 collection in Dubai at Fashion Week Middle East. The collection will also be revealed during the coveted Mercedes Benz Fashion Week Africa in Johannesburg October 2014. 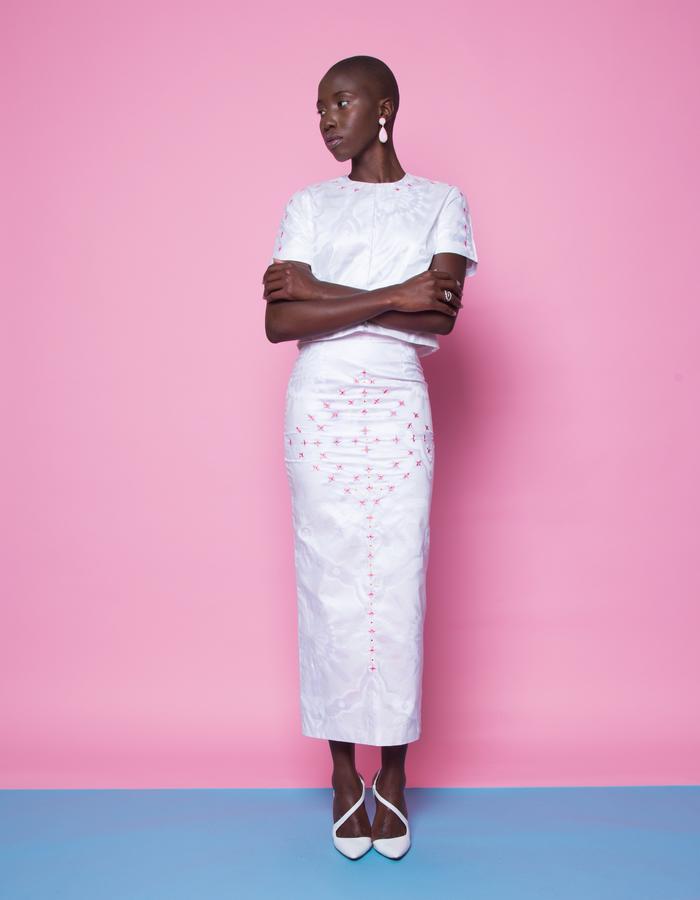 Sophie Zinga Presents “Abyssinia” for Spring/Summer 2015 inspired by the old age Ethiopian Empire, home of East Africa’s most ancient civilization.
The collection features the widely referenced cross from Ethiopia’s Orthodox Church which is interpreted as symbols and geometrical shapes onto structured cocktail dresses and jumpsuits.
A softer colour palette is key this season with powder blues, baby pinks, whites and oranges used throughout the collection as well as delicate hand embroidered crosses and crystal embellished adornments, while staying true to the brand’s minimalistic aesthetic.
The collection features fabrics like double face satin, beaded silk French chiffon, Alencon lace, silk organza and “bazin” which is a hand dyed, cotton brocade fabric worn in ceremonies across West Africa.
The bazin is patch worked to create ‘chess’ like patterns widely referenced as “Fara Fara” in Mali and the French Alencon lace is dyed using natural plant based traditional dye to create an ombre effect allowing the collection nod to the brand’s signature Tie-dye effect.
Slick tailoring and the use of soft satin fabrics refresh the sixties style shift dresses while the powder blue jumpsuit and the matching skirt and top combo exude luxury.
Standout pieces from the collection include the Pink satin Cape with matching tailored pants as well as the white silk chiffon gown dripped in embellishment. The sharp clean lines give the collection a fresh new modern take on the feminine looks of the season and ‘hint of a tint’ shades of powder blue mauve’s, pinks and orange update delicate lace.