In 1980 Snežana Aničić-Van Pelt was born in Belgrade, in what is today known as the Republic of Serbia. From a very early age she expressed an interest in drawing and fashion. Throughout primary and secondary school she was an active participant in art activities, competitions, and exhibitions. In the fourth grade Snežana was named the winner of a prize art talent in school and was awarded a prize from the National Museum in Belgrade. She has been designing clothes for the last fifteen years, in the last five years being involved in the process from concept to finished product. The City College of San Francisco presented her work as the fashion show opener in the spring of 2011.

Snežana had been actively working towards pursuing a degree in Fashion Design since the age of eighteen. Due to complex situations in the post Balkan conflict and the strict criteria of the public art education institutions in Belgrade, she never succeeded in entering the Academy of Applied Arts. The preparation for the Academy of Applied Arts included three years of extensive drawing and painting classes in various art studios in Belgrade, as well as fashion illustration classes over the course of a year.

Instead, Aničić-Van Pelt completed her undergraduate degree in Ethnology and Anthropology at the University of Belgrade.

In 2007 she immigrated to the USA. Snežana took pattern making, fashion illustration and fashion career classes at The City College of San Francisco from 2009 to 2011. A couple years later she enrolled in the MFA program at the Academy of Art University.

In 2016, Aničić-Van Pelt had worked with Eckhaus Latta on the brand's Spring/Summer '17 collection. the following year Snežana was honored with the 'Fan Favorite' in a student contest during the exhibition of Rei Kawakubo/Comme des Garçons: 'Art of the In-Between' at The Metropolitan Museum of Art in New York. Her graduate collection was part of Academy of Art University group show at New York Fashion Week in September 2018. 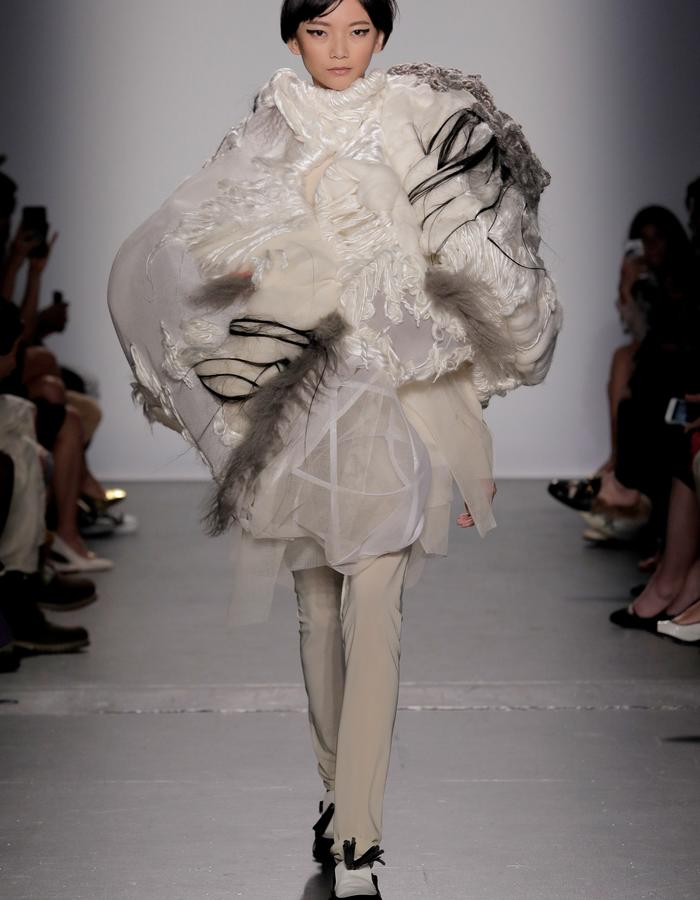    Living in a fast paced postmodern society provides a multitude of choices surrounding one's identity that forms fast and changes all the time. The idea of a certain lifestyle being absolute is outdated. Instead, there are many identities being chosen all at once and are often quickly discarded. These habits and the fast pace of life heavily influence gender identities. The line in a binary gender definition is blurred leaving a space for free interpretation and constant change. Therefore, there is no need to define clothes as just for men and just for women any longer. This project is challenging traditional perceptions of clothes in relation to gender, appearance and construction. Raw and crude techniques applied to fabric manipulation came as a response to the strong presence of high technologies in all spheres of life. Juxtaposing crisp and soft drapes, geometrical shapes to organic,sharp to delicate lines enables different identities to coexist.