Finished the University of Novi Sad in the field of master engineering​ of textile and fashion design in the class of professor Vasilije Kovacev with the grade of 10,00.

After graduation, she enrolled the school of photography in Belgrade in the group of creative and documentary photography in the class of professors Aleksandar Kelic and Sasa Preradovic.

​In 2017, she finished school of graphic designs and received 3 certificates in that field.

​During her childhood, Senka works with one of the best Fine Artists of her home town by sketching, painting and sculpting. In middle school, high school and on the University she had several collective art exhibitions and fashion shows.

In the year of 2013. Senka started volunteering and later on freelancing work in the National theater of Belgrade by doing costume design. She had the chance to work with the actor Milenko Pavlov on several plays.

​In the year of 2014. Senka started working as a costume designer for the National theater "Jovan Sterija Popovic" of Vrsac until 2017.

​Today she is doing freelance projects for domestic and foreign markets in the field of clothing design and graphic designs.

​Senka was a finalist on the BELGRADE FASHION WEEK 2016. in a competition called "COLORS OF LIFE".

​BAFE (Balkan Fashion Asotiation Event) chose her to have her single fashion show in fall of 2016. through another competition and she won the 2nd place in the ex Yugoslavia and Italy.

​Senka was in the finals of an COSMOPOLITAN competition for the theater costumes she designed for a kids play, 2016.

​She was a half finalist on Serbian Fashion Week on the Fashion Talent Designer Competition (FTDC), 2018.

​Senka had her first solo fashion show "FASHION AND MUSIC", 2018.

​She was a half finalist on Serbian Fashion Week on the Fashion Talent Designer Competition (FTDC), 2019.

​She was in the finalis on Serbian Fashion Week on the Fashion Talent Designer Competition and had her fashion show (FTDC), 2019.

​In her free time she designs clothing, textiles and costumes. Also she does arts and crafts, graphic design and photography. Her goals in the future is having her on fashion lines by the name SENKA.

​Fashion shows, exhibitions, projects and other competitions done by Senka can be seen on the given link: 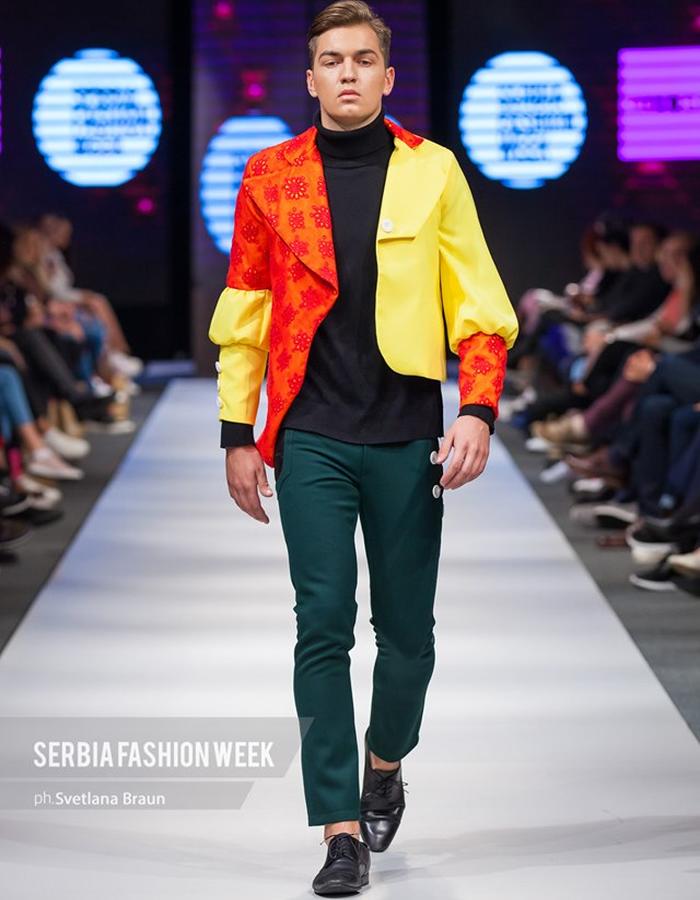 The noizz collection, now for men!

Colors, joyfulness, shapes and materials. All elements put in one or more creations showing a new style for men.
Materials used for creating clothing are wool, leather, cotton and polyester.