Sandor Lakatos, Hungarian fashion designer was born and raised in the small industrial town of Tatabánya, Hungary, during the communist era. He used to work at a sewing line from the age of 15, and his grandmother, the manager of the factory has taught his all the tricks of his trade from a very early age. To Sandor, it was clear from the very beginning that he would like to wear clothes that he designed. “It’s not like i had to think and choose a career, or like becoming a designer was the most obvious choice in my environment. On the contrary – I was called too idealistic, sometimes maybe even crazy because of something that came so naturally to me. What was so clear to me, seemed like the most outrageous thing to do for everybody around.”

As the owner of his brand, Sandor Lakatos Menswear, and as a freelance fashion designer, Sandor started his career in 2005. Ever since, he came out with new collections every year, wow-ing the Hungarian and international fashion scene. His unquestionable style and expertise has earned him a lot of publicity throughout the years, but the jump-start of the brand was his appearance in Vogue Italia’s new talents section in 2013. By this publicity, Sandor officially became acknowledged by the World’s fashion elite, and soon launched his clothing line under the name, Sandor Lakatos Menswear.

„The ability of creation makes us immortal” – Sandor Lakatos’s philosophy of life that affects his work deeply is to overstep his bounderies while being true to himself. The designer believes that personal charisma and the power to create something from scratch are divine aspects of human life, so these should be the core of everyone’s actions. Sandor himself prefers not to define his own style that Vogue Italia describes as ‘elegant,’ ‘extravagant,’ ‘minimal’ and ‘dark.’ His concept and style has always been the same for every collection – what changes from time to time is the way his message is communicated in his designs, and the external elements of each collection.

The designer prefers never to look at other designers’ collections. “It is part of my creative work to be unaware of other designers’ current work, because I want my ideas to come through unaltered and original.” – Sandor says. Instead, he receives inspiration from the technology itself that he applies on his creations. He never draws any of his designs on paper – he starts working directly on the fabric he uses. Another form of inspiration for the designer is looking at charismatic people’s lives and faces. As his 3013 collection published in Vogue Italia shows, he rather uses characters and faces of power than professional models, because these people can represent the concept of the brand better than anyone.

In the spring-summer season of 2014 Sandor is launching a new line for women. „During the last year I had so many calls and requests for clothes for women, that I felt this project cannot wait any longer. As I started, I got so inspired by the female image, that I finished with many more models than I originally planned. I always get my inspiration from the technical part of my job – so I feel that this year is going to be very productive. The concept remains surprise and rebellious elegance, and the whole collection has a very strong underlying message for women. I cannot wait to show it” – Sandor says.

His Spring-Summer 14 men’s collection is coming out right after the women’s collection does. As usual, Sandor is using the element of surprise. Naturally, the clothing line’s is aiming to stay on the menswear market as a main profile. However, the „For Her” collection is going to be worthy of the ecpectation that precedes it. 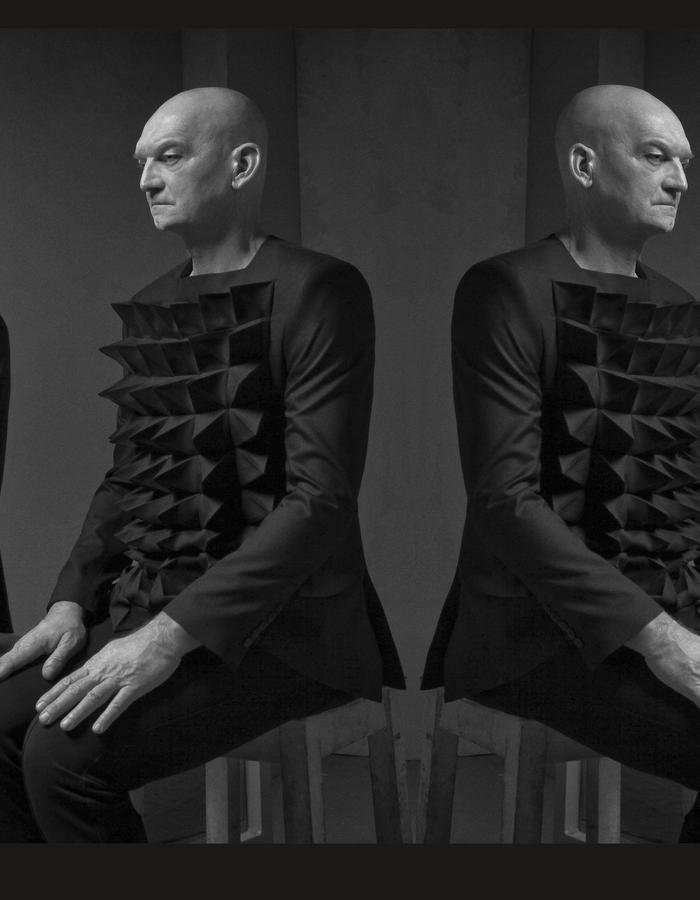 The FW 15/16 collection of Sandor Lakatos is the extension of the designer's minimalistic universe. New prints, new fabrics and applied geometry taken to the next level. In line with Lakatos's philosophy, the designer picked an extraodinary character, Andras M. Kecskes as a model of the campaign. His artistic face and pantomime inspired poses paired with the photography talent of Tamas Dobos and of course the perfectly tailored, meticulously detailed designs of Sandor Lakatos resulted in a breathtaking imagery again, continuing the brand's legacy of non-commercial campaigns. This season the collection is significantly larger than the previous ones, with more than 90 items - soon to be sold at NotJustALabel.com... Watch out!