She completed a degree from Universidad Anahuac in industrial engineering, and later went on to complete another in fashion design from Polimoda in Florence.

She presented her graduate collection “Catch as a Catch can” during PITTI UOMO, witch was featured in Vogue Talent top emerging designers to watch.

Graduated in 2015 finalizing a internship with German designer Bernhard Willhelm in Los Angeles.

After gaining experience working with an international company she decide in 2015 to launch her brand SANCHEZ-KANE.

She was invited to present her first collection “Courage of the Brave” during Los Angeles Fashion Week.

Named finalist for a year program sponsored by TFORTHREE (http://tforthree.it/), an italian fashion incubator for young designers in Milan.

Presented her latest collection “citizen Sanchez-kane” during FASHIONCLASH festival, an international and interdisciplinary fashion platform with a main focus on new generation of designers/artists.

While always specifically menswear focused, her collections are motivated by her mexican heritage and deeply influenced by her personal intrinsic emotional elements. SANCHEZ-KANE somewhere in between real and fantasy, mexican clothing brand curated by emotional caos. 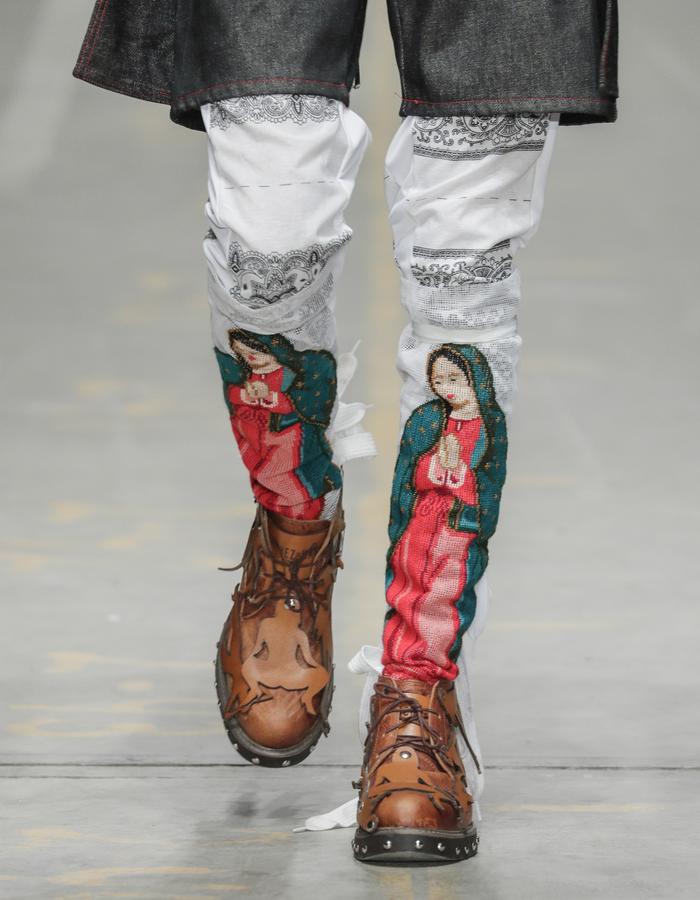 The collection focuses on two main subjects. On one side it’s about feminism in current Mexican society, and on the other the rise of Donald Trump who hates Mexicans and wants to build up a wall. My mother is American and my father is Mexican, so I made a new citizen, Citizen Sanchez-Kane, that incorporates both cultures. The main concept is; what if EVE was born before ADAM? Mexico used to be a macho-dominant country, but now women are powerful and traditional stereotypes of Mexican society have changed. Our DNA has shifted and this time men are fighting for their basic rights, trying to regain their identity and find a balance in a new female-dominated Mexican society. A new citizen is born –“ citizen Sanchez-Kane”- he uses art to campaign for nationalism and embraces imperfections: A strong sentimental new-breed. While we use language as a weapon to communicate, he wants to look for peaceful dialogue, balance and equality-for all. Intrinsic personal and political emotions are found: MAKE AMERICA GAY AGAIN!