I was born at the junction of millennia, the intersection of analogue and digital. I come from a family with mixed cultural backgrounds – my father is Russian and Kazakh, my mother is Tajik. Born in Dushanbe during the Tajik Civil War, my family soon fled to Kazakhstan, where I grew up. My coming-of-age story is somewhat shared with my peers across the post-soviet cultural space – I grew up watching both the old soviet cartoon classics as well as Nickelodeon sitcoms. I got inspired by my grandmother’s work as an art historian, dissecting traditional Central Asian motifs in tapestry, and at the same time became intoxicated with the idea that the world is becoming more connected and interwoven like the very threads in that tapestry, forming patterns and pictures that we are yet to apprehend.

As you can imagine my upbringing was a confusing experience to say the least. The clash of cultures and beliefs made it difficult to find my own place and identity in the new age. When I graduated high school, I moved to Paris for a year to explore and embraced the quest to find myself. There I realized my passion for design and fashion, thus I applied to study at Parsons School of Design. Living in New York, the modern Babylon of culture, has made a deep impact on my outlook, my views have evolved and matured.

This is how Roxwear came to life. It is a study of a complex identity in the surrealistic nature of existence in the post-Soviet cultural landscape of mixing cultures and nations, personifying a response to the plethora of overly simplistic questions regarding our origins, beliefs and ideals. It is a way to express the contrast of beliefs, which magnified in the digital age, where everyone has a voice, yet no one is to be heard. 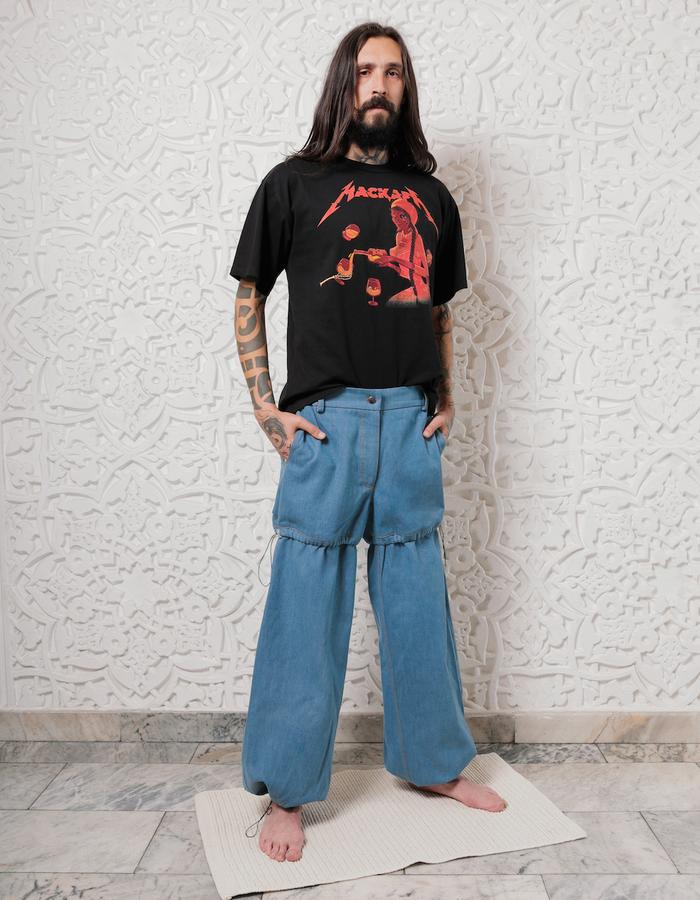 Episode 3 of Roxwear digs deeper into the cultural phenomena of Central Asia, exploring the indigenous patterns, combining nomadic heritage with brutalist legacy. The collection is filled with bright colors, daring prints and bold shapes: all signifying the opulence of thought and destitute opportunities. Logically it is split into 3 parts – ‘inspiration’, ‘despair’ and ‘reality’.

Tajik floral print dresses and traditional Kazakh patterns grace the sleek cut t-shirts, calling out to freedom of spirit and thought. Neon green denim pieces light up any room, demanding attention to the brightness of youth. The print of scantily clad women wearing traditional Kazakh headwear was planned as a tongue-in-cheek piece, but more on that later.

Print of the iconic Soviet concrete fences, crumbling, abundantly, in any corner of the post-soviet dystopia, signifies the relentless mentality that has seeped deep into the core of our DNA. The neon signs print translates – “open” and “wholesale and retail”, messages on signs typically found in corner shops the youth gravitate to at night. An actual carpet, that has long been a staple of décor of a frozen in time Krushchev-era apartment, has been repurposed into accessories – a bra and a belt.

The ‘reality’ uses one part inspiration, one part despair, and a dash of irony, to mix a bittersweet cocktail of ambivalence. “Maskara” – shame in Kazakh, a widespread word used for oppression, is the title of a t-shirt that portrays an obedient wife, rotting inside, pouring whiskey as she’s told. Korpe-skirt remixes the traditional Kazakh blanket in neon print and gives it a new purpose. The traditional Kazakh prints have been glitched out and faded to create utilitarian workwear. Neon sign embroidery give the vulgar liquor shop atmosphere an element of chic. All the elements are mixed and matched in myriad of combinations, each providing a unique flavour of the Central Asia today.

The print of pin-up Kazakh girls has proven itself to be provocative - it got us banned from multiple printshops around the city, who took it upon themselves to uphold the public morality standards by censoring expression, only strengthening the message that this collection carries.