Red September – brand of male and female clothes founded in 2018 by the designer Olga Vasyukova, suggests to view the usual things from a new perspective.

Olga works in several areas: design, illustration, production, photo shoots and image collaborations. The designer holds her diploma from Fashion Design at Polimoda and her first showcases in Florence. By her first education Olga is a railways engineer, which explains a lot of complex tailored and technological clothes. The designer works with the concept of each collection emphasizing the mix of the old school forgotten aesthetics with the key points of each contemporary art discipline. 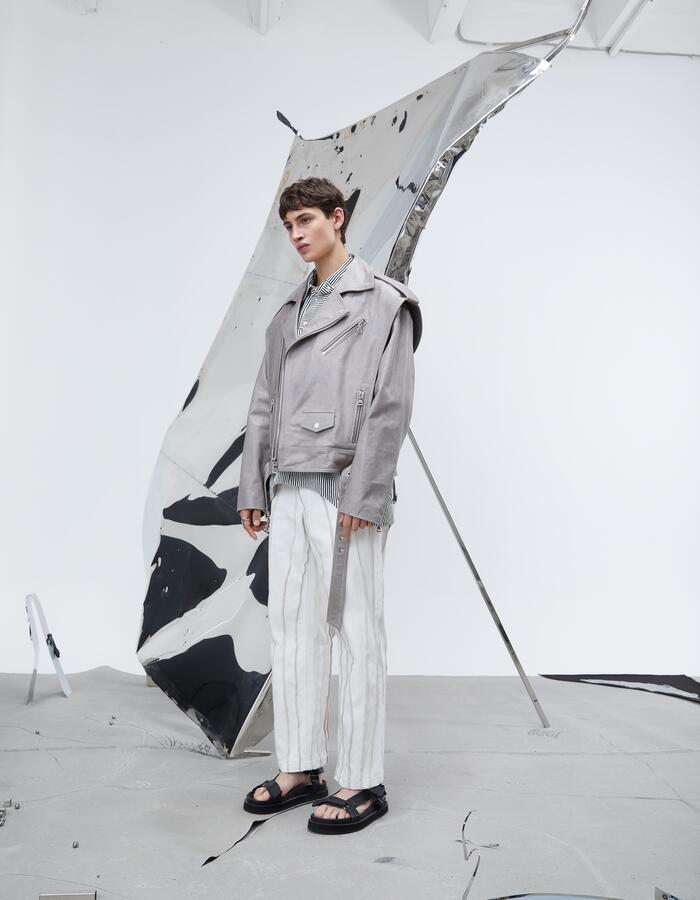 Summer is the natural inspiration of Red September SS22.

Rest-houses, holiday hotels, sanatorium that were really famous in Soviet Union in 70s, 80s and even in 90s with the Perestroika are the starting point of a collection that wants to celebrate the flavor of the holidays and the zest for life of a time far and near.

From the swimming-pools to the beaches, from the buildings themselves to the impressive showers where women and men used to make special water procedures dedicated to Soviet workers mainly, the creative director Olga Vasyukova found a jolt to create a collection that is relaxed and contemporary, with the usual attention to the small details and to the brand DNA and the Perestroika age.

It’s the strongest reference that opens the intentions to a largest concept with “vacation euphoria” as motto.
And so, we can find a link to the classical dachas where usually people go to have some days of holiday, practice sports, find piece far from the cities.

Do you remember the postcards, common in Russia from the Soviet till the Perestroika years?
“We’re living our best life!”, “So many emotions!”, “Can’t wait to see you again!” - when the phones were not that common the postcards (that often included photos and letters) were the best way to communicate with our lovers, to tell the holidays, to know what our friends were doing.

Olga twisted these “memorabilia” in prints that are a sort of guiding thread of the entire collection.
Printed and inspiring it’s also an old black and white picture of a big holiday house in the country-side that it’s a leitmotif as well.

Additionally, in Moscow she found a passionate collector of stamps who jealously guards these treasures.
She had the possibility to choose some unique ones that were celebrating the summer of the Olympics in Soviet Union and specifically developed for the Games in 1980.

The work on the colours and the prints is meticulous so to obtain the result the designer wanted.
Vacations are synonymous of rest and fun, we said.

During vacations you can't give up on hats, caps, bandanas and foulard.
In a vintage market Olga saw peculiar Soviet silk scarfs from 90s Perestroika... and again she worked on the concept and the colours to create a patchwork print that embellished modern bandanas for Babushkas.
And moreover... Back again to the very concept of Trilogy to Patchwork, Olga dedicates the inspirations to the beers this time.

During the summer, each of us love to drink a cold beer lying on a deckchair. Also who used to dedicate the vacations to self health in the sanatorium.
Imagine to be in 1978, you’re in a bath at Sanduny (not far from Moscow).
In your hands you hold a Baltica.
Wellness and beers don't seem to get along but Olga loves contrasts: contrasts give authenticity and power to her collections.

With the SS22 RS launches its accessories line finally.
All pieces are in materials semi-precious, from the chains to the earrings to the covers for AirPods.
Olga preferred silver and laser glass while the inspiration comes from the clothes: the laces of the hoodies, the denim tags, all the fabrics.

It’s a way to create harmony in a chaotic work of construction and deconstruction, of beauty and trendsetting that are the trademark of a today brand that winks insolently at the Perestroika. It’s a brand contextualised and far-sighted.