"All of us have the potential to achieve our goals. We simply need to believe and have courage to unleash this potential and to reach our dreams“ – says Robert Kupisz.
Robert always had the courage to dream big. His life story proves that he is not afraid of taking risks. He consequently moves ahead while discovering and developing his multiple talents.
Robert Kupisz was born in a small town of Gacki. He grew up in Kielce where he graduated from an arts high school and later gained a degree in pedagogy. He was always an avid dancer. When he became a World Latin Formation Championships champion he decided to open his own school of ball-room dance called Step by Step. For 10 years he trained Polish and international dance champions. At one point tough he felt it was time to try something new. He took a leap of faith, sold his apartment in Kielce and moved to London where he signed up for a hair styling course at The Toni & Guy Academy. With these newly acquired skills he moved to Warsaw where, within a few months, he became a leading hair stylist. He worked with Polish and international fashion magazines such as Vogue, Chic, L’Officiel, Elle, Vanity, Fair, Madame, Marie Claire, Cosmopolitan, and G.Q. He also co-operated with the most renowned Polish theatre and film directors such as Krzysztof Warlikowski (at the National Opera in Paris: The Makropolus Case, Iphigenia in Tauris, Parsifal and in Poland: (A)pollonia, The Tempest, Angels in America, Krum), Jan Komasa (Suicide Room), and Jerzy Skolimowski (Essential Killing).
For a long time Robert Kupisz has been a fan of the grunge style; he remade, hand-dyed, sewed and styled his own clothes. This has gained him recognition within the fashion industry and many times gave him the title of the best dressed man in Poland. Finally, in 2011, Robert Kupisz yet again redefined his professional life and made his debut as a fashion designer.
His first collection, inspired by the 70’s rock music (Summer 2012), was a long-remembered event and an undeniable success. Enthusiastically commented on by the media, praised by his friends and a quickly growing group of clients, this collection was a first step to creating his own brand. Today Robert's brand has six unique collections in its oeuvre; each wrapped aroud a different motif yet maintaining Robert's distinctive style. The second one was melancholic and modernly patriotic (Heroes Winter 2012/13), inspired by the young generation of those who fought in the Warsaw Uprising in 1944. The next one – bald and sensual – reffered to the Wild West (Wanted, Summer 2013). The forth was based on the rich and fascinating Gypsy culture (Gelem, Winter 2013/14). The fifth one (Fair Play, Summer 2014) was inspired by the Olympic Games and sport rivalry, and the sixth – by the movement of bikers. Each and every one of Roberts’ Fashion shows is very different from these presented on the Polish Fashion scene, that it is always a long awaited event, widely commented on by various people.
In 2012 Robert Kupisz was granted the Designer of the Year Award.
Robert applauds freedom, unconventionality, and listening to one's own intuition. He is deeply rooted in the Grunge style where one can mix and match freely and anything goes. Uniqueness and authenticity are Robert's core values. Through his collections, which redefine the rock and street style, Robert gains crowds of enthusiasts, as well as adversaries, new clients and critics alike. Robert Kupisz loves his work, designing, as he himself often says, "with my clients in mind. They are the ones who must like them". 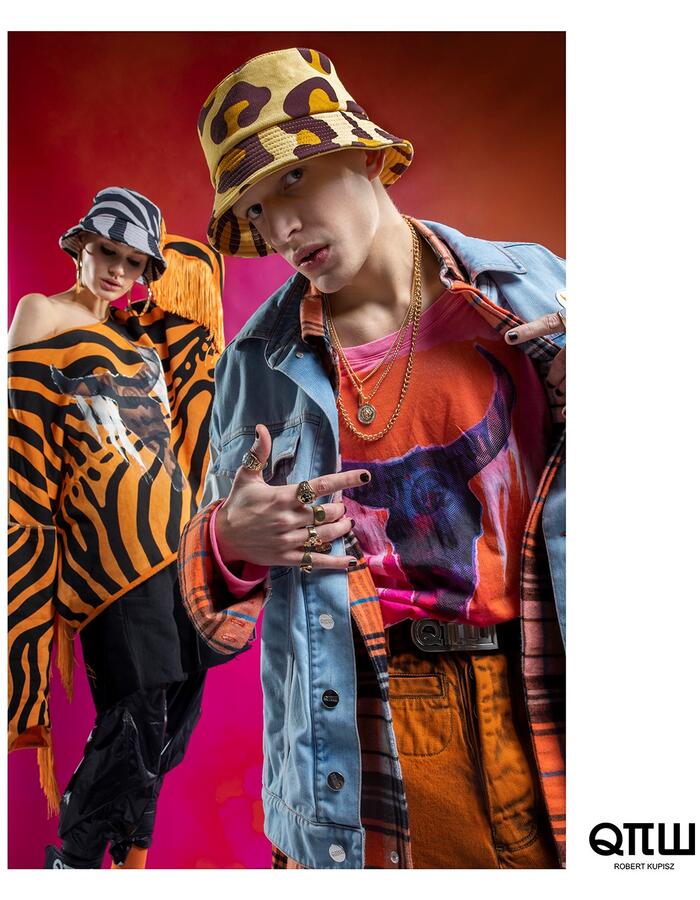 The NOW collection for the Winter 2021/22 season had its premiere on 18 December 2020. The image-building campaign by Agata Serge and a dynamic advertising film by Paweł Grabowski and WOW Pictures have complemented the presentation of the collection that is already available in pre order.

“The idea for the collection came to life in a difficult for everyone period of lockdown, in which most of us became friends with streaming platforms. I was absorbed by a documentary series The Last Dance, telling the story of the iconic Chicago Bulls team, which, in addition to the story of Michael Jordan, also showcased fascinating personalities of the basketball world: Dennis Rodman, Scottie Pippen and Phil Jackson. The team's coach, nicknamed Zen Master, was fascinated by the culture of the indigenous people of America and the zen movement, which he successfully applied in his work with the famous Bulls." – says Robert Kupisz about the inspiration. "Rodman – unique, untamed, crazy – has fascinated me the most. His love for tattoos, piercing, coloured hair and experimenting with style has made him one of the most picturesque athletes in the world, and his image has inspired me to create the NOW collection: colourful, optimistic and rebellious."

As a result of this fascination, the most colourful collection in the history of the Qπш Robert Kupisz brand has been created. "Being tired of the global pandemic situation made me want to give customers the joy of wearing colourful clothes. That's why I used intense orange, pink, yellow, blue and wild animal prints in the collection, and I dedicate it to everyone striving for freedom and tolerance, who are not afraid to express themselves through style. – says the designer.

The main theme of the collection is a print with a motif of the bull’s head inspired by a Native American totem that in their culture was the emblem of the family clan. The totem was most often an animal that was considered the guardian of that family. The NOW collection is a controlled eclecticism. The designer has decided to use contrasting colour combinations, mixing various animal motifs with a colourful plaid, blue denim or elements of polyamide. In this season, Qπш Robert Kupisz continues the trend of hand dyeing, which has been the trademark of the brand since its inception, and customers will find iconic t-shirts and sweatshirts with prints there, which are collector's items. A comfortable casual style prevails in the collection, which can be adapted to any occasion with the help of appropriate accessories. The offer for the Winter 2021/22 season includes winter vests and jackets, sweatshirts and trousers made of soft fleece, comfortable flannel shirts, loose t-shirts, denim trousers and jackets, as well as eye-catching dresses. The collection is complemented by colourful accessories in the form of best-selling hats, scarves and socks. The fabrics are primarily soft, high-quality cotton, certified viscose from sustainable production, polyamide, denim made from a combination of cotton with recycled cotton and polyester, as well as natural leather. The Climashield® Apex™ insulation was used in the jackets, which is also used in winter clothes produced for the US Army. The collection has been sewn in Poland.

The photo session by Agata Serge is just as colourful and lively as the NOW collection. "The main themes of Robert Kupisz's new campaign are the play with colour and the action of "print on the print". We tried to choose the styles for the background alternately, so that the series of photos was consistent in reception. We used two different cameras to perform the session: digital and analogue –Mamiya RZ67. The analogue camera rolls were developed, then scanned and added to the final layout. The new collection by Robert and the backgrounds that were specially prepared for the session are very saturated with colour, and such a treatment along with the combination of analogue and digital photos cements the final material into an organized whole. – says the author about the session.