I have always believed that Beauty originates from the right balance between these factors, and my creations are a result of their combination. A handbag is a detail to which a woman cannot renounce. It is an object that must always represent the wearer’s uniqueness, and therefore must surprise, excite and have a character. It is an accessory that a woman never chooses randomly. She chooses to wear a particular handbag because she links it to a memory, she has to attend a particular event, or she has to meet certain people. The handbag is the self-image that she wants to convey to those who meet her. For this reason, it should always be as close as possible to her world, philosophy and culture. The woman who chooses a Pois-è handbag, does it because she immediately perceives an affinity with her own feelings, as she lives following the philosophy: You feel before You think.

Pois-é was born in 2015 by Silvia Pieraccini. It was founded with the aim of giving a soul to the objects that surround us, because every object we own is part of us and must be able to pass on vitality and passion to the wearer. This aspect represents the added value of a Pois-é handbag, which, beyond a good manufacture and a nice appearance, has a beating heart, compared to the soulless mass production objects hanging in glittering showcases.
Each Pois-é bag is handmade, cut and assembled by Italian leather craftsmen. Every model is made with the highest attention to detail and produced in limited quantities. Each handbag is marked by a code certifying its uniqueness. It is made in Tuscany, where I live, with Italian leather. 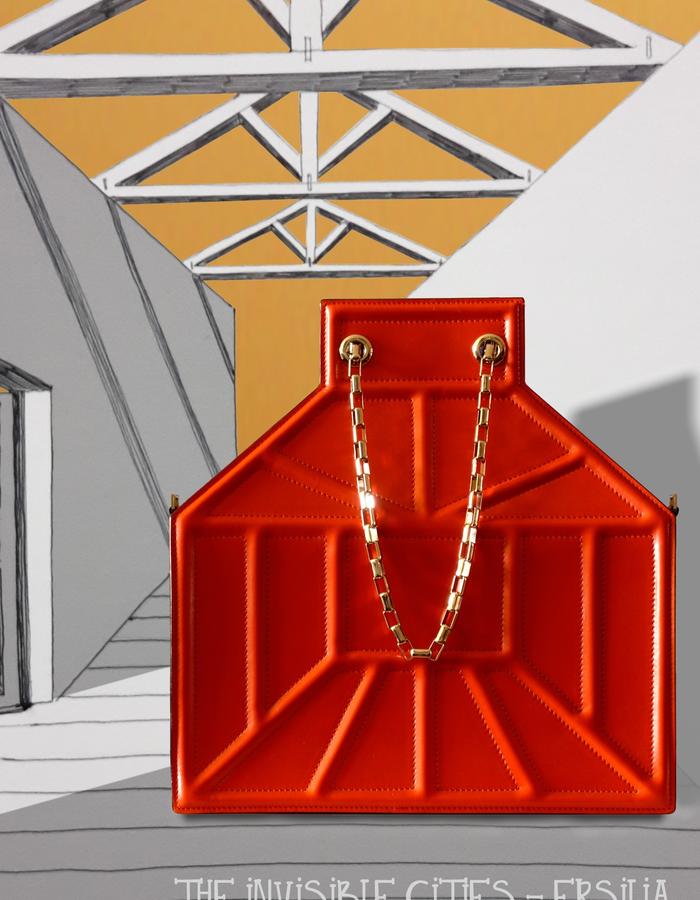 Ersilia refers to an archetype: the house. The walls and the roof mark the boundary between the INSIDE and the OUTSIDE. On the rooftop, you may find a turret, or, if you prefer, a small terrace, just like the typical Tuscan house in which I grew up.
A clean, essential and basic volume, reserved and inscrutable, but from which the structure, the frame itself seem to search for the way to violently emerge and give substance to the form. A frame that is at the same time a trifling decoration, fantasy and a game of perspectives that half-reveals a glimpse of an imaginary interior space, a meeting place, a shelter.
The sources of inspiration, have been the numerous perspective representations present in our History of Art. I have always considered them as an extraordinary tool, because they can give form to a space that doesn’t exist and allow you to immerse in another reality, which is no longer the one that surrounds you. The awesomeness of Art is, in the end, just this: giving the possibility to enter in an imaginary trip that you didn’t expect to take.
The other source of inspiration, which gave life to the name of the bag, is the wonderful novel by Italo Calvino: Invisible Cities. Ersilia, one of the cities, is also this: a tangle of threads woven by its inhabitants between a house and the other, representing the relationships between families.
Spiderwebs of intricate relationships that find a form.

Fedora is a bucket bag wearing a mask.
The mask, which covers the uniform red background is actually an architectural order, whose matrix is represented by the order of the Pienza Cathedral. On the bag, the solid and three-dimensional architectural element becomes a pure coating, keeping the proportions between the substantial elements unchanged: base, column, architrave.
Again, as in Ersilia, the bag models itself after the house-church, because, after all, a bag always keeps our most treasured and useful objects.
The geometry is clean, simple and devoid of frills. In this bag too the structure is evident, becoming an ornament at the same time. The uniformity of the contrasting background colour enhances the proportions between empty and full spaces. The only elements that enliven the stark form of the bag are the handle and the rose window.
The handle, shaped as a hanging chain, is reminiscent of the nice festoons of flowers which were carved or painted on the pilasters of Renaissance palaces and churches, while the central rose window is the "key" to open their treasures.
Fedora as well is one of the cities described by Italo Calvino in his book, Invisible Cities. In Fedora there was a palace keeping the images and models that over time the city should have taken, but that never came true. Fedora represents the real city and the thousands of other imagined cities, not because they are all equally real, but because all are only supposed, as supposed is the mask that our Fedora is wearing today.