Adebayo Oke-Lawal has been designing since the age of 10. He started Orange Culture in 2011, after having worked with several Nigerian designers, to turn his unique vision of fashion into reality. Since starting the label and an official runway debut at Lagos Fashion & Design Week 2011, he’s been hard at work trying to showcase Orange Culture to the world.
The label is more than a clothing line, Adebayo insists. It is a “movement” that covers universal silhouettes with an African touch to a creative class of men, translating into a heady mixture of Nigerian inspired print fabrics, colour and contemporary urban street wear.
This does not however, mean that Orange Culture forgets women who have taken over the brand, giving an androgynous twist on Adebayo’s designs. The garments answer to just about anyone who's interested in telling a story with the way they present themselves.
All pieces are manufactured in Lagos, from ethically-sourced fabrics from local Nigerian fabric makers. Orange Culture takes our staff through rigorous training processes and offer them the opportunity to attend skill acquisition initiatives.
Aside from fashion design, creative director Adebayo Oke-Lawal also worked for three years as the fashion editor for WOW! magazine, and. has styled numerous celebrities such as Kate Henshaw, Rita Dominic, Munachi, Lala Akindoju, Ice Prince and has done editorial work for magazines like Vogue Italia, Nataal, WOW and many more .
Most recently, Oke-Lawal was highlighted for his co hosting part on Shade Corner as being one of the most hilarious characters on aforementioned show by Accelerate TV. He also teaches, and most recently held a skill acquisition class for budding fashion designers supported by Fets Wallet.
Adebayo Okelawal is also very concerned with the youth as he launched a CSR project called "Painting your Dreams", where he inspires young people through the art to believe in themselves and this led to him being listed under Forbes 30 under 30 people in the creative industry in Africa.

.
ACHIEVEMENTS
Orange Culture was one of the first Nigerian brands to begin collaboration within the industry and has inspired many to follow. The label collaborated with numerous brands such as Huawei, Dennis Osadebe, Rokus London, Maxivive and many more. Adebayo Oke-Lawal most notable partnership happened recently with globally recognized Nigerian artist Davido, where he designed a limited edition collection sold exclusively at major store Selfridges.
Orange Culture has created a new niche for menswear in Nigeria and has undeniably opened doors for brave and more creative menswear brands. The brand has achieved international recognition and has been featured in prestigious publications such as Vogue ( US,UK , ITALY) , WWD, BoF, Fucking Young, L’Uomo Vogue, Huffington Post, New York Times, CNN, BET, MTV, Vanity Fair, ELLE, Marie Claire, L’Officiel, Style.com, The Guardian and The New York Times.
Orange Culture is a regular participant of Lagos Fashion & Design Week (LFDW) and has been shortlisted for huge design platforms like the LVMH Prize 2014 for Young Fashion Designers, where he was picked alongside 29 of the hugest emerging designers from all over the world out of 1221. Adebayo Oke-Lawal was invited to come to Paris to present his work to the jury made up of eminent people from the fashion industry, such as Karl Lagerfeld, Nicolas Ghesquière, Marc Jacobs, Riccardo Tisci and Delphine Arnault.
The label was selected in 2015 by Louis Vuitton and Moet Hennessey for their first ever LVMH prize as one of the 20 finalists selected from over 1221 brands all over the world in Paris. Then it went on to be selected by L’Uomo Vogue and GQ Italia to present at The Latest Fashion Buzz in Florence and then by The International Trade Centre’s Ethical Fashion Initiative, as part of the Pitti Fondazione Discovery’s Guest Nation Project, to participate in the Pitti Uomo “Constellation Africa” show in Florence.
2015 was definitely a very prolific year for Orange Culture, as Adebayo Oke-Lawal welcomed the opportunity to display his work at the International Fashion Showcase organized by The British Council and the British Fashion Council during London Fashion Week. Still in London, Orange Culture showcased at London Fashion Week Men’s Designer Showrooms June 2016 and has showcased. The brand did not stop there as in 2017, it showed for the first time on the runway at London Fashion

Week under fashion Scout and has gone on to then launch one of the biggest collaboration known to the Nigerian fashion industry and to be the first Nigerian brand to stock at Selfridges. In 2017, the brand went on to launch its biggest collaboration yet with superstar Davido, launching a ready to wear collection in Selfridges London and also expanding its manufacturing/supply chain due to increased demand.
2018 the brand increased its media presence being worn by celebrities like Lupita Nyongo, Dua lipa , Chimamanda Adichie and went on to be the first ever African brand to be nominated for the Woolmark Prize .
The brand is currently stocked in Lagos, Paris , London, New York, Hollywood and Kenya and has plans to stock in many more stores. 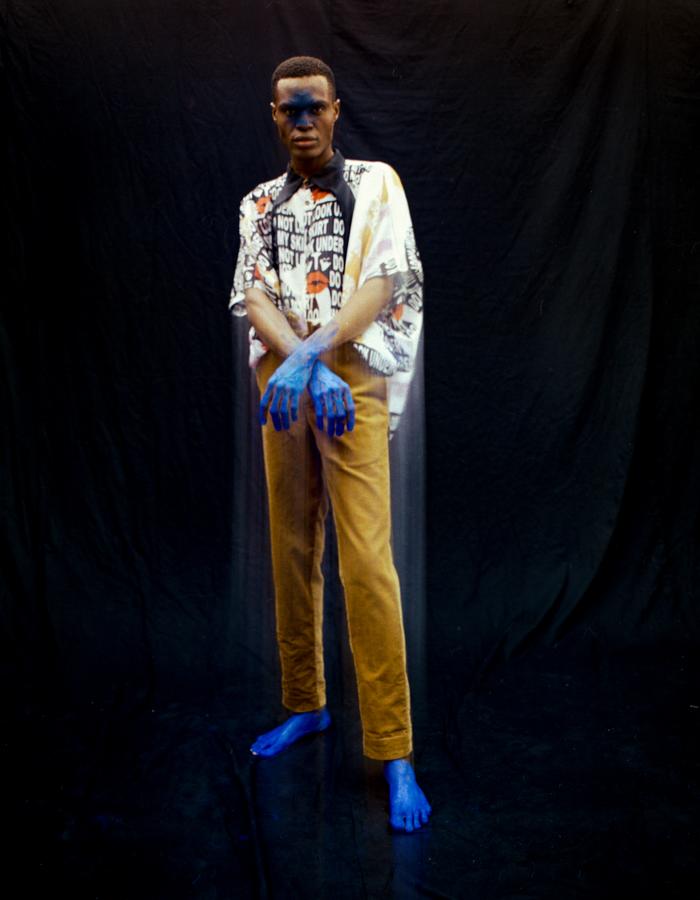 DON'T LOOK UNDER MY SKIRT

Do Not Look Under My Skirt!

Our AW19 collection is a combative exploration of the confrontations faced by outcasts. It’s a “mind your business letter” to people who antagonize how people choose to authentically present themselves to the world.

It’s an explosion of colors and jarring graffiti inspired prints displayed tastefully in heavy satins, wools, cottons and shielded in Aso-oke, Suede, Corduroys and Dupion. The prints provoke thought and push you to ask yourself “ why am I looking under anyone’s skirt?”

The collection is really about celebrating self – liberation and expression , which is a path “Adebayo“ says Orange Culture helped him to take. Orange Culture encourages stepping out, whether it’s in the way you dress, speak and live . It’s about being you and telling society to not invade your privacy or question your choices judgmentally.

The reason we chose the skirt is because a skirt is the most invasive thing to look under and is really a metaphor for how problematic it is when society tries to stigmatize differentiation.

The Orange Culture warriors are dreamers and they love to live in an alternate liberated Nigeria, where your differences are the highest tools for warfare. A world where individuality and knowledge of self is aspirational and beautifully alien-esque.

The Shapes are inspired by a lot of traditional women’s clothing embellished with cutouts and print details inspired by the secrets we keep to survive in a conservative society.

Credits for the VIDEO