Kanyinsola Onalaja was born in Nigeria but educated in london, where she studied BA Fashion Design at Istituto Marangoni. Upon Graduation, she was awarded best student of the year 2014 and best fashion collection of the academic year 2013 – 2014 and as a result given a scholarship to study a masters degree in womenswear design (which she is completed July 2017) The BA collection was shown at Graduate Fashion week and Africa Fashion week in London.

Following that she briefly attended Academia di Costume E Moda, in Rome, where she studied 3D Pattern Cutting. During her BA and master’s studies she worked with brands such as Christopher Kane and Giles Deacon Couture. Growing up in Nigeria she discovered traditional art and became fascinated with the different media used to express it.

Her love for colour and textiles grew, leading her to experiment with different mediums and ways to create works of art that used fashion as a means to showcase it. Onalaja, known for its high craft experimentalism was founded in 2014 and has now showcased for the second time at Lagos fashion and design week. Her MA collection was also successfully picked up by Moda Operandi. 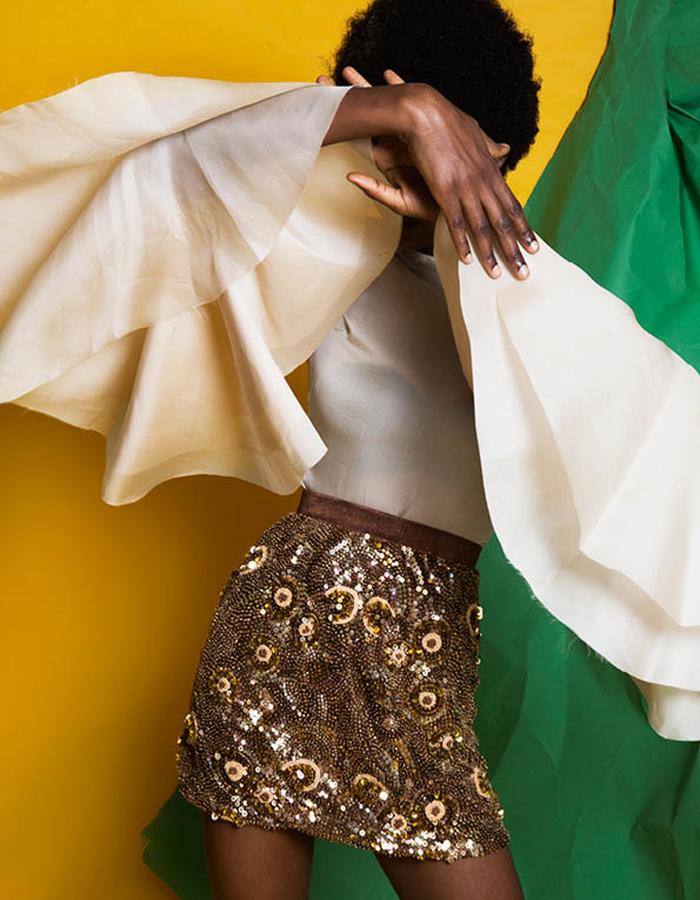 Melanin," Her Story," & The Art of Manipulation

​Young Africans, like Onalaja, are constantly looking at culture with millennial eyes, and working to integrate tradition and culture to modern day design. This collection is a tangible, visible and wearable manifestation of cultural heritage. Heritage is re-imagined through the repetition of manipulated patterns, a play of scale and recursion that echo many disparate African designs and knowledge systems.

The SS17 collection is a celebration of culture and women, mostly African who have inspired, challenged the status quo and impacted our world. It is a representation of femininity and “GIRL POWER.” Women including, Funmilayo Anikulapo-Kuti (her work with the Abeokuta Women’s Union, in the collection, is represented through surface fabrication and the use of traditional woven Yoruba fabrics.), Margaret Ekpo (the fashionable woman who combined western and Nigerian fashion influences and ultimately coined the “afropolitian” phrase), Chimamanda Adichie (The Modern literary voice), Nike Davies-Okundaye (The woman with the artist brush), and Adelaide Casely-Hayford ( The African Victorian Feminist). Each item takes on influences from each woman’s style, culture, era and ideology.

African culture is artistically characterised in its expressive nature, from markings to carvings. These aesthetics have been manipulated and are represented through each fabric and textile manipulation. Circles, spots, and dots play a significant role. This collection explores patterns within patterns and shapes within shapes to try to recreate an infinite scope. Repeated markings are often used to represent beliefs, tribes and elements of culture, glimpses of these can be seen throughout the collection Recursive loops are created through repeat manipulations, shapes and forms. Emulating various shades of melanin act as a physical representation of one’s identity, equally imitating different skin tones. Deep tones are direct references to typically African sculptures, while others reflect the creative directors Edo and Yoruba roots​