Omid focus as a fashion designer is to create wearable pieces that are
outside of time. He aims to create garments that can adorn you for a long
time, so much so, that they become a part of you; they become you. In
combining his interests in science, psychology and politics, as well as
a curiosity in philosophical research based on an idea of the future,
a future that is often described as negative, he design garments that
embody the escapism from this negativity of the future. The complexity
in his designs, that he achieves through his mathematical and technical way
of thinking combined with his singular vision, enable him to create
garments and sculptures that could be from thousands of years ago, as
well as from a thousand years in the future. He also creates his own
textiles to add more personality and individuality in his designs. 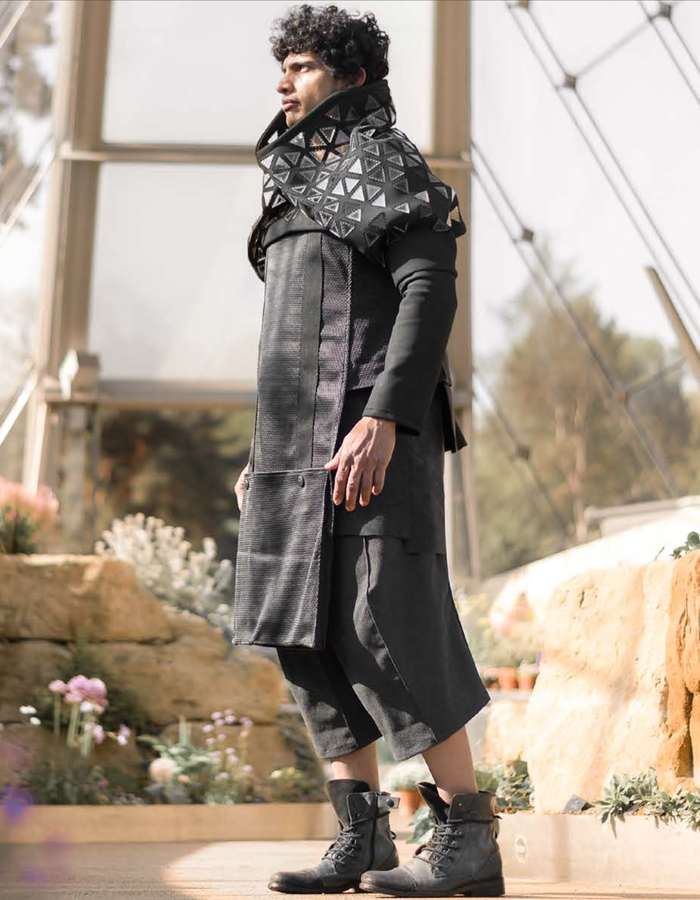 It wouldn't be the way it is today, if it wasn't the way it was yesterday

Feeling DISPLACED in a FANTASY world, having SEHNSUCHT for a different life, WACHHEIT is the only way to ESCAPE illusion.

By merging real leather with man-made modern tech fabrics, there is an
essence of history and otherworldly qualities intertwined. The idea of
escapism becomes visible in Omids designs by combining the fabrics and
textiles to create shapes that force the body to take a certain form,
whilst at the same time the precision and detail with every zip and
fastening enables you to free yourself and feel unrestricted. Using
technological machines such as laser cutters allows me to develop and
create geometric shapes for a structured and rational design.