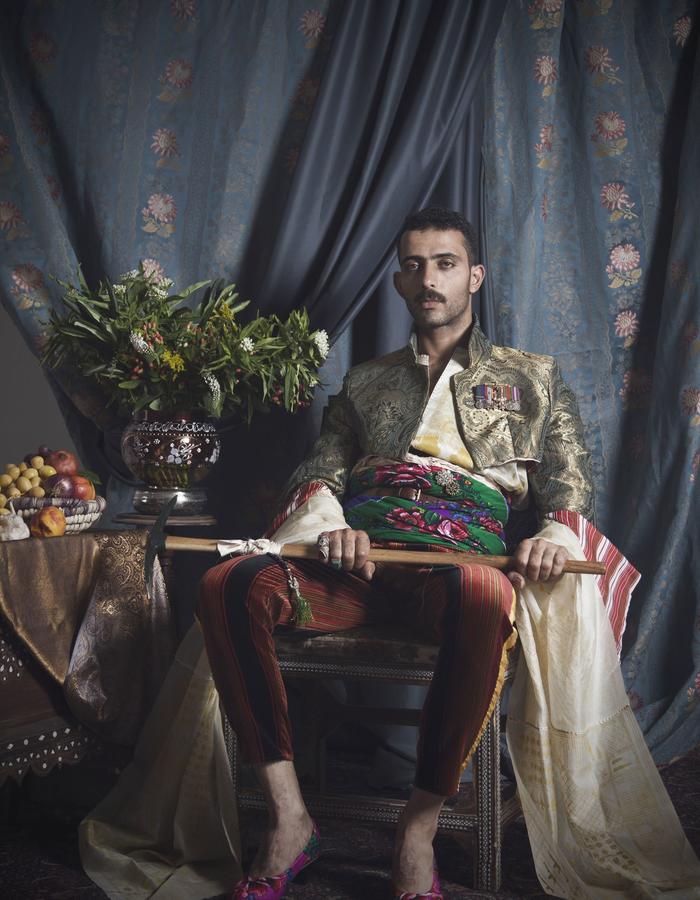 The Ceremonial Vniform concentrates on the masculine framing of the Palestinian male, manifested in the martyr, prisoner, fighter, worker, farmer, ‘terrorist’ and politician. This imagery is consistently juxtaposed against the authenticating and romantic image of the female who seems to eternally appear in her uniform of traditional rural dress.

Through uniform, the individual loses their individuality and simultaneously becomes super-human. Exempt from accountability, they are licenced to disrupt, disempower, dictate and destroy, within an indisputable system of superiors and subordinates.

As a collection of garments, accessories, samples, techniques and manuals, The Ceremonial Vniform is an imagined system of dress for male officials in a would-be Palestinian State. The project critiques the emancipatory supposition in fashion that appropriating male cuts, silhouettes and fabrics in womenswear is somehow empowering. A commentary on how we rarely create alternative paradigms – instead we appropriate the pervading narrative of power structures; we simply change uniform.

Omarivs Ioseph Filivs Dinæ experiments with historical Palestinian fabrics, techniques and patterns, to investigate the contemporaneous scope and limits of costume. For this project he has worked with shoemakers from Ramallah, Mother of Pearl carvers from Bethlehem and embroiderers from Hebron and Beirut.

The portraits, created in collaboration with Lebanese photographer Tarek Moukaddem, is an attempt at deconstructing images of power, symbols of the nation, nostalgia, and ideas of gendered-dominance. The deliberate reference to European portraiture is a statement of mockery and derision of the inept Palestinian political establishment. The sitters, Abu Zuhair and Abu Saleh, who give their names to the portraits, are Syrian manual labourers who have to work and live in Lebanon. Their total lack of previous modelling experience is central to the aesthetic and ethos of the project.

The Ceremonial Vniform started as a response to the A.M Qattan Foundation’s Young Artist of the Year Award for 2012. Earlier phases of the project have been shown in Ramallah (Nov 2012) and London (Jun- Aug 2013). This is the final phase of the project.