The essence of my philosophy that permeates both my work and private life lies in the premises that by purposefully practicing self-irony, the beauty will arise. Today, fashion magazines and media are constantly under fire, suffering blows as the only culprit responsible for the development of BDD in young people. However, I strongly disagree with the slew of accusations fashion magazines and beauty industries have been exposed to. Just look at history. BDD is not a newer disorder. The BDD symptoms and problems have been a part of our everyday life since the very beginning, whereas fashion magazines and mass media are a product of our recent times. Neither do I see BDD as an obscure form of vanity, as many have suggested. For me, it is a serious mental disorder. The main symptom of it being an excessive concern with perceived defects of our physical features.

What I found as a cause was actually something etched in my design as a human being, a fatal flaw that was not a product of an outside world, but was inserted in the very process of our creation. This flaw is our paradox. We all have this fear of not being accepted within a group, or a society. That, because we differ in some way from the others, we will be evicted from the group. This fear is so omnipresent in our everyday life that it sprouts out a wish to conform, to be a part of the group no matter what. But on the other side, we also have this desire to distinguish ourselves from all the rest, to be unique. Today, thousands upon thousands of people are suffering because they cannot satisfy this desire.
This perpetual conflict between the two has brought suffering to many and has unabled them to live a happy life.
So, BDD could not possibly be a consequence of some image that fashion magazines force upon us, but it actually comes from within. And media cannot be the only culprit when it comes to provoking the BDD, as we usually compare ourselves to the people belonging in our immediate circle, our family and friends. And here is where the key to ending the vicious circle of self-torture lies.
In order to get rid of all the negativity that comes with BDD, the person has to observe, measure and isolate the “bad” factor within their closest surrounding. Having contact with the right people could work miracles. But above all, developing a sense of humor and exercising it with self-irony within a group of friends- that seems to the cure. At least it was for me.
A deliberate practice of self-irony is the method that has brought me here. It is the core of my art the Nose. And it is the force that has enabled me to expand my notion of what freedom truly is. It goes beyond fake and real, trivial words denoting a great fallacy. It is absolute.
My pieces denote just that. I deliberately use a degree of mechanisms, rendered in metal or constricted from deconstructed functional objects in order to show a sense of perpetuum. Mechanisms also convey this illusion of timeless infinity that leads the mind into a state of thought and speculation, serving as a reflection of a new spirit. Just like a mind, reconstructing inferiority complexes and intertwining them into real life to create beauty, so do I use the raw materials and run them through different processes to create something truly unique. The end result in both cases is self-acceptance. That’s why I insist upon self irony and that’s why I have placed my bumpy nose as a logo and name of my brand. Low esteem issues that people struggle with and that the media is blamed for are nothing but the reflection of us all as well as the time we live in. So the fashion industry only becomes an ever-changing mirror of ever-chaining people. Nothing else. 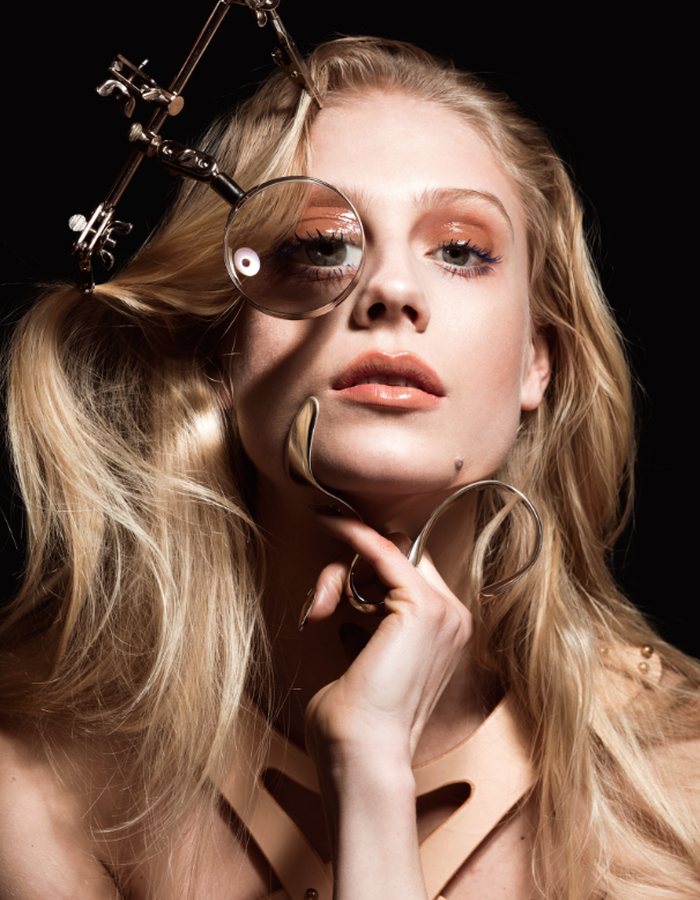