Noa Baruch, 28 years old, fashion design graduated by Shenkar College, Tel Aviv, Israel.
During my studies at Shenkar, I specialized in different styles and fields of the fashion design, such as tailored and casual women's wear, tailored and casual men's wear, denim, leisurewear, knitwear and sustainability.
I have acquired many professional and technical skills and tools such as pattern making, modalism, sewing, fabric draping, textile knowledge, digital prints, embroidery, fashion illustration -2D and 3D cads.
During my studies, I learned some of the most important design software, such as Photoshop, Illustrator and Optitex (3D Cads simulation software), that I used a lot.
During my studies, I was granted 3 excellence academic awards, including a scholarship to recompense my achievements. I was one of a few students, chosen to receive a scholarship for a summer internship in London, which I spent at the activewear department of Marks & Spencer.
During my studies, I have attended several competitions. I won the first place in a volunteer competition called “therapeutic blanket”, designing a heavy blanket used for victims of sexual harassments. Furthermore, I won the first place at the worldwide ‘Knit Game’ competition conducted by the luxury house of Loro Piana, Milan, which enabled to present the work at the Pitti Filati exhibition in Florence (2019) and an internship.
I was awarded an Excellence scholarship from the America Israel Keren Sharet Foundation for my final project.
I am a fashion finalist of the worldwide contest of the International Talent Support- ITS 2020.
My designs were presented in few fashion shows of Shenkar as well as in few editorials of fashion magazines, including “Vogue Talents”.
My mother tongue is Hebrew. I have an academic speaking, writing and understanding level in English and understand and speak French. 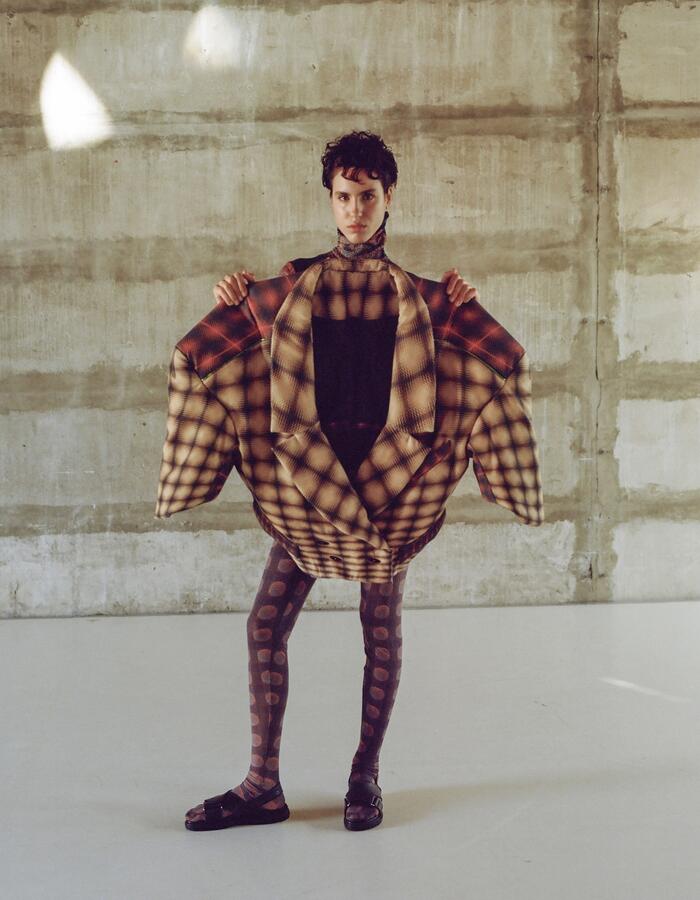 My project is based on a comparison between my grandmother’s fifty year old pattern notebook and new 3D cads simulation softwares.
The issue of dimension and perspective cached me. While in the notebook I could see every pattern from two sides, the software enabled me to watch the simulation from many points of view.
It was fascinating– every little detail of the simulation changed according to the angle I watched it.
I designed garments that although you watch them frontally, they create the illusion of perspective, like if you watch them from different angles which are not a frontal one.