Alexandru is a young designer based in Bucharest, Romania. He has studied both architecture (at the Bucharest University of Architecture and Urbanism) and fashion design (at the Bucharest University of Arts). His collections are produced in Bucharest. His work has been featured in various publications, both printed and online. His education and experience extend from fashion design and architecture to Graphic design and illustration, having numerous collaborations with advertising agencies, artists and designers. His first connection with fashion design was in 2009, when his illustrations were printed on fabrics and were part of a collection. As an illustrator his works were displayed at Museum of Contemporary Art of Bucharest in 2010, and other significant local exhibitions in 2011. Heavily influenced by mythology, biology and astronomy he creates characters which tell stories about life. All of his projects have the same simple core that is something, a small part, of the daily routine, of the emotion. And when emotion is created they, the characters, have the opportunity to venture inside themselves and to feel‚ without anything stopping them, led only by the simplicity and purity of the dream, of the new story. 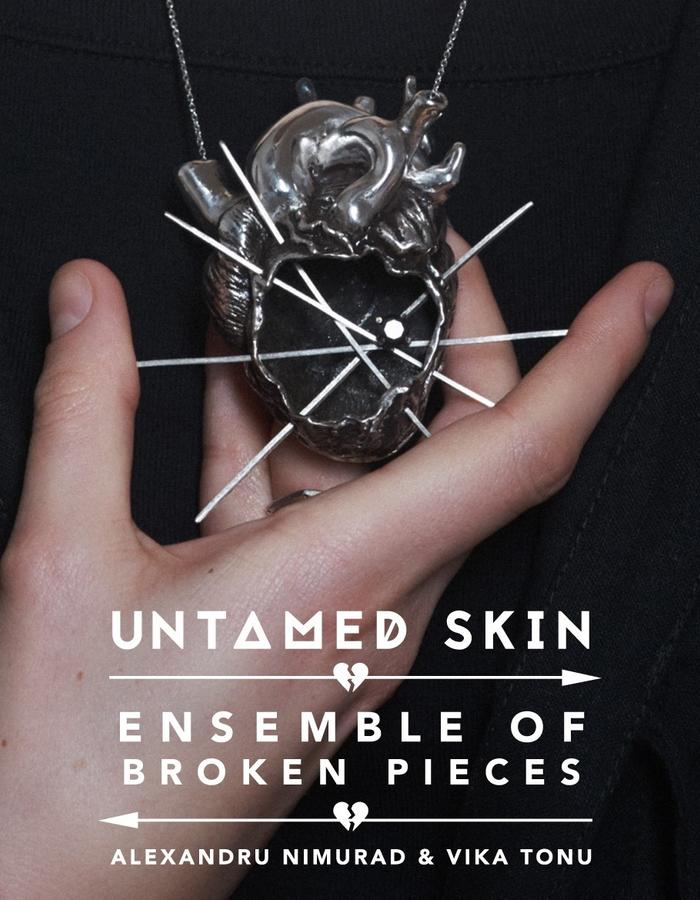 ‘Untamed Skin’ and 'Ensemble of Broken Pieces' shows the origins of the exquisite Romanian blouse - an untamed, yet delicate garment, traditionally worn close to the skin of its wearer and handcrafted from natural textiles and pigments and embroidered with primordial symbols and patterns.
Alexandru Nimurad teamed up with jewellery-designer Vika Tonu and developed their collaborative collection around the blouse as an organic structure, honouring its distinctive local background and visual history.
Each outfit interprets a certain blouse that was made of special events during one's life. The strong bound between peasants and nature was beautifully represented by special Blouses, enriched with strong symbols and worn only once in a lifetime.
There were five stages:
-Being ready for marriage
-The wedding
-Being a mother
-Helping giving birth
-The funeral

The jewellery collection 'Ensemble of Broken Pieces' is a collaborative collection and tells the story of a healing process and of loss. Each piece represents a step on a journey of rebirth, recovery and rejuvenation, and captures the raw and savage beauty that heavy feelings sometimes possess.
However they also tell the beautiful story of Queen Marie of Romania, Queen Victoria's niece.

The seductive Romanian blouse became fashionable in the interwar period when Queen
Marie of Romania began wearing it as a symbol of belonging. She also left her heart as a legacy and a symbol of her love for Romania and its people.

The blouse was made famous by Matisse and fashion luminaries Yves Saint Laurent, Jean Paul Gaultier, Emillio Pucci and, more recently, Tom Ford.
‘Untamed Skin’ is a collaboration between GALATECA Gallery of Contemporary Art and Design, Bucharest and the Romanian Cultural Institute in London. And it was part of the International Fashion Showcase and London Fashion Week, where it won three special mentions for 'Best Country Exhibition', 'Best Designer' and 'Best Curator'.