Zagreb-born designer Nika Čuić established her label NIKA TOM in 2015, shortly after obtaining a degree in Fashion design and Costumeography as well as earning an MA in Economics at the University of Zagreb, Croatia.

Naming the label  after her mother's family name has given the label a very personal touch from the very beginning and a promise of tradition in every garment she makes.
Texture combined with shaped precision is intristic to her work. Garments are created with attention to the ineffable part of one’s being, a bottomless chaos which always leaves its trace in a new creation. The design process begins with a concept, followed by textile research and is often executed in traditional and little used handwork techniques.

Each work represents a determined pursuit of validation for a current thought incorporated in the designer's imaginative vision.
The  aesthetic is deconstructed, structured and formed, yet fragile, sincere and idyllic.

Interlocking deconstruction, minimalism and handwork has brought Nika forward in the European fashion scene.
Since the establishment of the label, she has participated in a number of shows and exhibitions, such as Berlin Alternative Fashion Week, Fashionclash Maastricht, Fashion Week Trend Report in Milan, Zagreb Fashion Week, and earned herself press coverage in issues of Vogue UK, Vogue Italy, Harpers Bazaar Poland and Kaltblut. 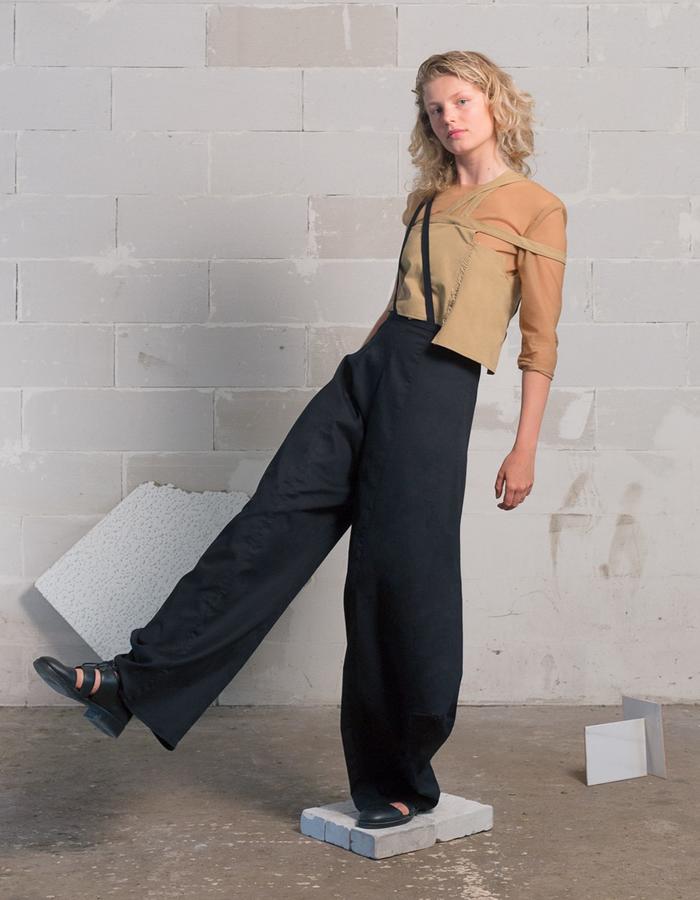 The main idea of the collection περιπετειες (peripeteies) is to incorporate tendencies and drive parallels between the universe of reality and the inner one made in our thoughts and felt through emotions.

What is real and how to delineate it from the mind of a self, was a somehow simplistic question that triggered a research for answers. Is the real world, the one surrounding us, just a confirmation of our expectations and beliefs? Can the reality be reproduced, legitimized or completely dismantled by already known and common patterns?

On the other hand, the mind is living its own reality which is created by interconnectedness of yourself with lived experience. It is a little fenced-in piece of reality, which one calls me, moi, ja, io, ego, etc., as opposed to everything that’s outside of the fence that becomes “not me”. The mind is a gateway between the finite and ad infinitum.

Letting the mind slowly dance with the reality enables a possibility to create its own reality which is constantly searching for modifications, struggles and compromises in order to continue the dance. The reality then made and confronted is the one known only to ourselves hard to be grasped with words and expressions.

In this way, it can be a step back or further from the pure reality surrounding us – from that thing that everybody is observing. The mean of the collection is to represent both worlds, many realities on the same piece and let them be undisturbed while learning new dancing moves together.