Nevena Ivanovic was born in Belgrade in 1992. After completing undergraduate studies in the French school of fashion and fashion management "Mod'Art international" she founded her own brand "NEO design". She continued her education at the "School of Art and Design", where in June 2016 she had graduated. She has participated in group shows at BAFE and Belgrade Fashion Week, but her first independent fashion show was in Paris in septmber 2016. She became a member of the BFW Design collective through platform for young cratives -Fashion Inubator.
She won the prize“ BazART“ as encouragement to young designers, as well as the prize „Textil Young Designer Award“ , and in addition to these two awards she is one of three winners of the competition B-Future.
On Serbia Fashion Week Nevena was the winner of Fashion Talents Design Competition and that award gives her a oportunity to showcase her latest collection (now in progress) on Fashionclash festival in Maastricht , Netherland. On 40.th Belgrade fashion week she had her solo fashion show and for collection ENSONEO II she won Elle Fashion Award for outstanding Show. THAT AWARD DIRECTLY NOMINATED HER FOR ELLE INTERNATIONAL FASHION COMPETITION WHERE SHE ENDED 7TH IN A WORLD RANKING. During 2018 AND 2019 she won several prizes including BIG SEE FASHION AWARD - IT FACTOR OF THE COUNTRY, AWARD FOR PRESERVATION AND PROMOTION OF NATIONAL HERITAGE, SPECIAL AWARD FOR FASHION PERFORMANCE - WHITE DAY AND WANNABE MAGAZINE AWARD FOR DIGITAL PRESENTATION. ONE OF THE MOST IMPORTANT PROJECTS SHE DID IN 2018 AND 2019 WAS COSTUME FOR SERBIAN EUROVISION REPRESENTATIVE TWO YEARS IN A ROW.
More about NEVENA's work and design you can find out on her Instagram profile. 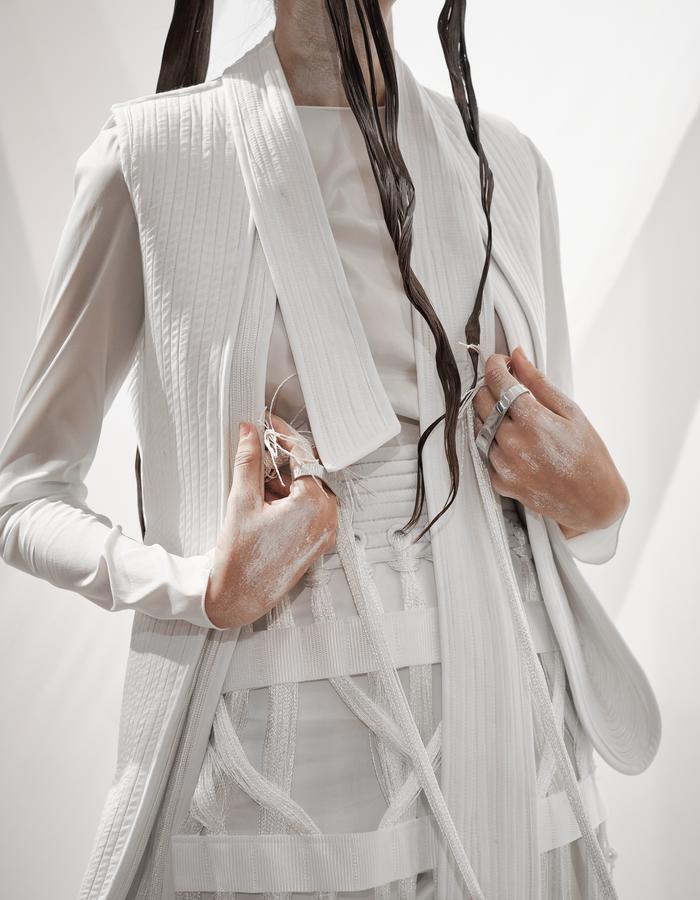 the collection is inspired by Slavic goddess Mokosh and her spirit animal -White Bee. In Slavic tradition, white bees represent the first female ancestor in a family tree. This collection is exclusively female-oriented and it tells us a story about family and an important female role in that community. IT also research relations between generations of women and the heritage they bring and spread.