The founder of NAVRO ™ is well known in Ukraine and other CIS countries costume designer, stylist, director, clip maker Olga Navrotska, who worked with almost all Ukrainian and post soviet celebrities during the last eighteen years of a successful career.
Olya's first project was a solo concert "Oma" of Iryna Bilyk in 1999. Olga has created exclusive outfits for the star and her dancers.
During the last 18 years Olga cooperated as a creator of outfits and costumes with Alla Pugacheva, Filip Kirkorov, Andrey Danilko, Sergei Lazarev, Lyudmila Gurchenko, Alexey Chadov, the band Via Gra and Valeriy Meladze, Janna Friske, Irina Bilyk, Taisia Povaliy, Glukoza, Svetlana Loboda, Ani Lorak, Tina Karol, Masha Efrosinina, Vera Brezhneva, Natalia Mogilevskaya and many others.
As the exclusive costume designer Olga was picking up a team of high-end artists and professionals to work in musicals, films and mega popular shows.
Usually the projects Olga take a part at are full of Ukrainian and Russian celebrities along with respected producers and directors.
Also among her brilliant works are such projects like "Za dvoma zaycami", "Kushatpodano", "Tri mushketera", "12 stulyev", "Zvezdnie kanikuly". Recognition and popularity designer achieved after co-hosting at television show "Shans". After that she was posing for such a magazines like FHM, XXL, EGO, Elle, Viva, Pink, Story and many others.
Starting from 1999 Olga designed costumes for more than two hundred music videos. By that time Olga had been invited to create style for the world famous magazines: Viva, Elle, FHM etc.
The history of the company NAVRO starts in 2005 when Olga opened her own style studio-atelier. The very best managers, masters, handmade masters, tailors, cutters were involved to work in a Olga's team.
Since design studio NAVRO was opened it continued to expand its activities in show business, working closely with major television projects, vidoes as well as developing intensively in the field of personal style, tailoring exclusive clothing for numerous private clients.
Focusing on providing exclusive services for creation of personal style and individual high quality tailoring, specifically for business, casual, sportswear, evening, wedding and outerwear fashion, Olga popularity grew steadily and in 2007-2008, exceptional style studio NAVRO in Ukrainian Fashion Industry holds one of the leading places.
Trademark NAVRO was based in 2007.
Almost every day styles created by Olga Navrotksa were seen on a Ukrainian Tv screens.
Esthetics for Olga is one of the most important things, that is why she does all the photoshootings of her clothing collections by herself.
It's only one of the many others creative talents she has. In 2012 Olga started stage directing.
She did 17 music videos, short movie and video campaign for trademark NAVRO.
During the years of dynamic growth Olga has been awarded many famous prizes.Here are some of them:
"Style Icon" from Elle awards
"Best Stylist" by Best Ukrainian awards
"Stylist of the Year" in competition "Black Pearl"
"Prize for active citizenship" from Best fashion awards.
Important to note that along with the creative work Olga is seriously engaged in the development of the fashion industry and in 2009 she became a member of Handicrafts Chamber of Ukraine, which represents Ukraine in the Hanseatic Parliament and UEAPME for many years.
Due to business and professional activity Olga led the expert direction for the development of international projects in the SSI sectors of Ukraine. This activity is facilitated participation in lawmaking in Handicrafts Chamber of Ukraine.
In may 2011 Olga created her first clothing collection by NAVRO ™. It had a resounding success as it represented a massive, beautiful performance and met the needs of customers in its exclusive focus.
In spring 2012, together with stylist Olga Slon’ she designed a collection named QUEEN CASUAL by NAVRO, the second line of the brand.
Continuation of the collection under the same name Queen Casual by NAVRO ™ was created in spring 2013.
In December 2013 Olga Navrotska presented her third collection of NAVRO ™ INSPIRED BY UKRAINE (NIBU).
A special feature of that collection were scanned with a hand-painted batik printy- images on a fabric. Collection excelled by special authenticity, originality and refinement. Clothing were designed for special occasions, with unique Ukrainian national characteristics. Each designed and rebuffed NAVRO ™ model had a meaning of national peculiarities.
Thereby such a huge success of the collection helped to define a new niche in Ukrainian designers market.
New collection of t-shirts with portraits of famous ukrainian people was created after.
In 2014 due to tragic revolutionary events in Ukraine, a real buzz happened among fans of magical art works created by NAVRO ™ .
Huge increase of the spirit of patriotism brought revolutionary directed prints with patriotic sense to a huge success. As stated above for that in September 2014 Olga got Viva best fashion award for her active citizenship.
Also NAVRO ™ famouse for Luxury clothing and accessories collections.
In the meantime Olga works with all the different kinds of existing materials and fabric paintings, creates clothes for all the different kinds of life events, according to the individual needs of the customer figures.
One of the main reason of such a huge success of NAVRO ™ is selectable quality of fabrics, manufactured prints, unique images as well as the exclusivity and individuality of products. Mostly because almost all the prints were created by designer herself... 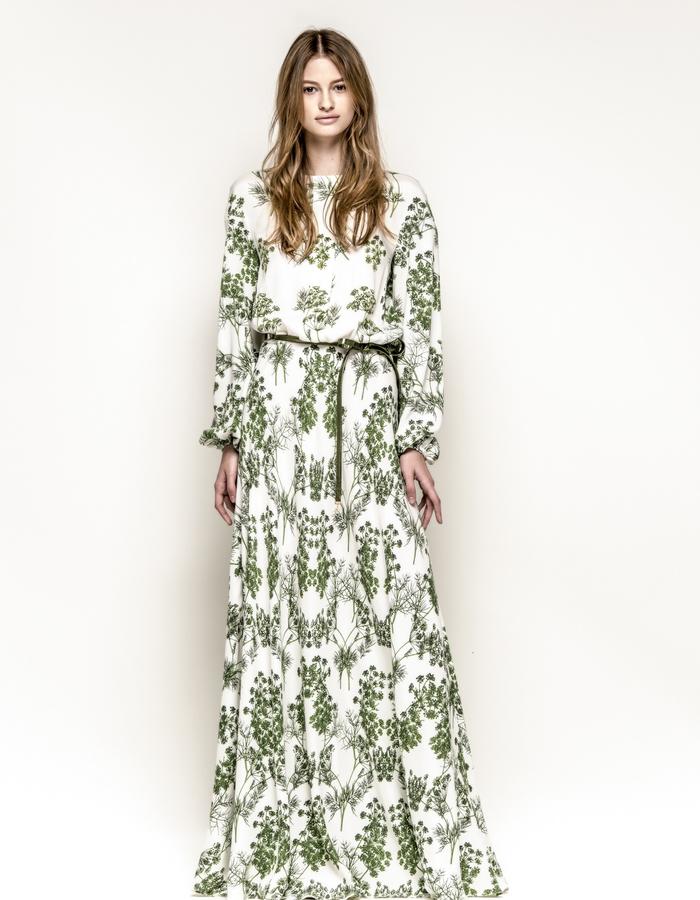