Mikage Shin was born in Tokyo, Japan in 1991. SHE is an aspiring designer for Japan who is rapidly making her way mark within the underground fashion scene. Even though she came to New York in 2017, Mikage has already achieved NYFW, VFW, Miami Fashion Week, Hotel Asia Art Fair 2019's special exhibition successfully. MIKAGE SHIN works were on VOGUE ITALIA, Teen VOGUE, Refinary 29, L'OFFICIEL LITHUANIA and more. On December 31, 2018, her fashion show was also featured by NY1 Spectrum News.
In Mikage’s childhood, her Japanese father and her Korean mother divorced. Mikage and her sister were taken by the mother, and she began to think about―what was the best life for women, what was the importance of nationality, what was the identity―? From these backgrounds, Mikage has been highly interested in social problems. Mikage had challenged lots of social actions since she was in senior high school.
In addition to that, she was really into another thing―FASHION. Mikage was impressed by various fashion styles that could change a person’s impression completely different.
Thanks to fashion, she found that what you liked could shape your real identity. It is not decided by nationality, age, and social status. You can be what you want to be by yourself. Through fashion, she could gain self-confidence.
In 2014, Mikage graduated from Waseda University and entered Dentsu as a marketing planner in 2014. However, she could not give up her dreams. She quit the company and entered PARSONS the New School for Design in 2017 to fulfill her dream. While she was in Parsons School of Design, Mikage Shin became an aspiring designer and got shooting offers from NY based fashion creators. Her works has already been published in several print and digital outlets, including Flanelle Magazine, Soleil Magazine, Afropolitian and more.

Mikage is eager to create new genderless and ageless brands for empowering today’s intelligent self-made woman and individual, who lives in such a difficult time without any unreasonable limitation and stereotype. The 20st century’s art history and 20st century’s social problems highly inspire her avant-garde designs. Since she firmly believes that fashion definitely can promote self-confidence and change their life greatly, she is creating best clothes today. 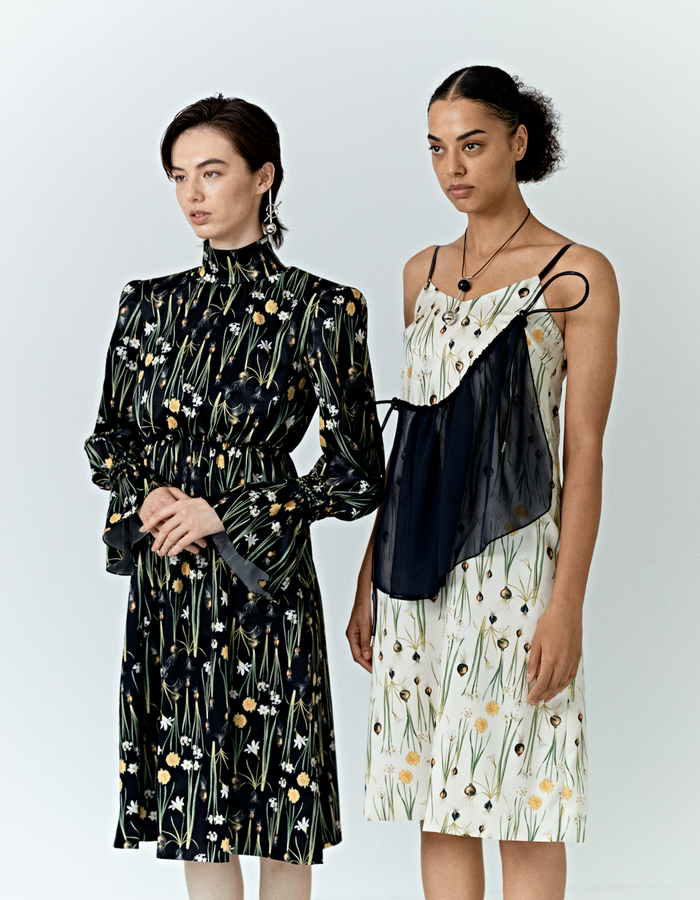 This year, the COVID has changed our daily lives in a big way. We were able to see
problems that we had previously overlooked in our daily lives, and we were able to see
things that we had pretended not to see before. This extends to all kinds of intangible and
tangible things, including politics, society and human connections. For this collection,
the designer sensitively grasps the changes in society and people's feelings that have been
shaken by the "visualization", and came up with the theme of "things we don't usually see".

For example, instead of so-called "beautiful perfect flowers", the designer focuses on "bulbs"
and "tree trunks" that support life underneath the flowers. The designer also uses "Marble",
which lies dormant deep in the earth's layers with beautiful appearance over time. The
designer uses "The Horse in Motion" by Edward Muybridge which is the world's first
photographic animation of capturing genuine movement. Moreover, the designer created a
coat which clad in light and wind with a translucent cut jacquard that looks but is invisible.
What are you seeing? How do we confront what we see? What we have unconsciously tried
not to see?

The intelligence and each inherent beauty in individual people will be reflected through
this collection.