Born in Tolmezzo (September 8th 1992) and grown up in a small countryside reality, Martina is fascinated by the fashion world since her childhood. Her favorite hobby was- and still is nowadays- to fill in blank pages with sketches.
By the time she was in mid school she could turn simple oddments of tissues spread all over the house into dresses and accessorizes by using just two tools: the needle and the wire. Her course was already fixed; she attended the Art High School in Udine specializing in fashion, and thanks to the school laboratories she could improve her technical and manual competences.
Once Martina’s skills were steady she decided to move to the capital of fashion -Milan- where she undertook the carrier as a fashion designer. Thanks to the efficiency and high intensity studies, practices and laboratories at the Istituto Marangoni, Martina increased her devotion for pattern making, developing a personal technique: geometrical shapes marked on the fabric and later draped on the mannequin. By the time the academic journey was coming to an end she was able to model many capsule collections and evolve her own style: clean, minimal and modish.
The gratification followed all that work. In February 2014 Martina was one of the four winners of the contest ‘Next Generation 2014’ held by Camera Nazionale della Moda; to them was granted the opportunity of showing 12 outfits at the Milan Fashion Week, with their own fashion show.
Lately she has been attending many short classes offered by renowned colleges, as London Central Saint Martins College and she has also been in contact with different ateliers and brands. She worked for one of them and they found her work amazingly fresh and innovative, yet wearable by anyone.
She is now designing for her own brand, focusing on women’s wear. 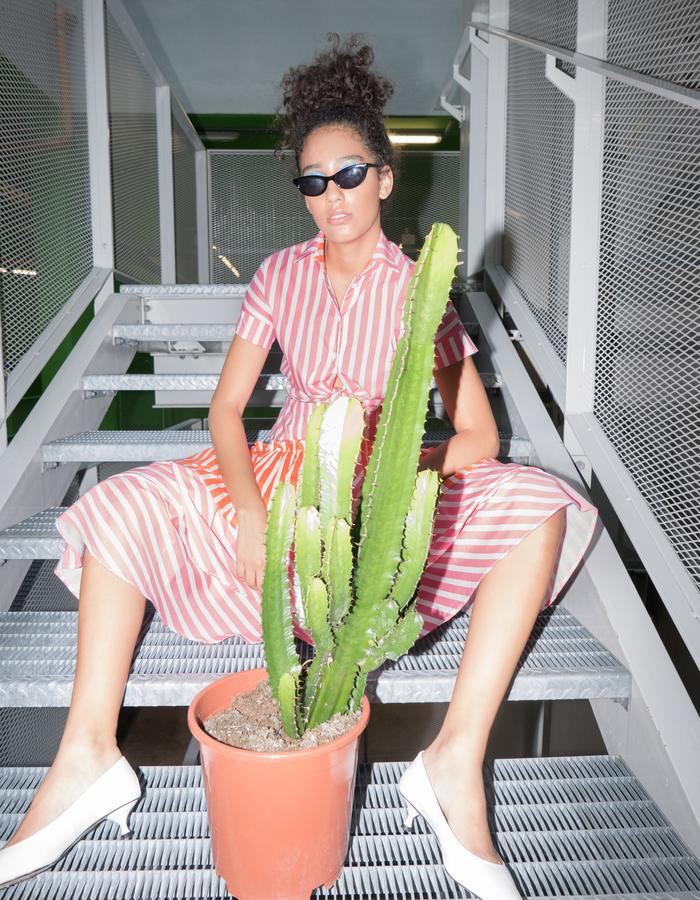 INTO THE JUNGLE Spring Summer 2019

Bare foot into the jungle.
Step by step deep inside the forest.
Side by side with the nature and its soul.
Green stands out delineating vegetation in all of its shapes, from trees to flowers, from raw fruits to leaves and so on...
Nature is the leading lady of the collection.
Water stretches reflect colours creating lacquered surfaces of light.
Leaves turn in all-over patterns on linen and cotton.
Light and shadows create a suggestive pattern on denim and on knitted frills.
This collection is a tribute to Mother Nature not just ethically buy also from the point of view of design.
Embrace Mother Nature.
Woman as a brave and noble human being.
Tailored shapes mixed with geometric volumes stand out from the collection overview. Oversize and tight garments alternate to dress up the silhouette.
Spots of pink and orange flowers mottle the green becoming flat stipes on the canvas.
The Safari mood melts with a romantic touch in the garments.
Ruffles, frills and embroideries combine with maxi pockets, belts and elastic coulisse.
Light absorbs all colours turning them into a bright white background.
Matt and clear surfaces alternate with raw and silken.
Fresh fabric as popeline, voile and linen mix with thicker textiles like gabardine and denim.
Natural fibers in extreme contrast with technical cloths as waterproof and coated surfaces.
The colour chart is wide but mostly bright: pink, orange, violet, green, blue, beige and white.