Marlena Czak graduated with Bachelor Degree from Design Department of Poznan University of Social Sciences and with Bachelor and Master Degree from Department of Textile and Fashion at Strzemiński Academy of Fine Arts in Łódź.
Her graduation collection entitled „Why me, why me” is three chapters fashion story with strong narration. Collection was qualified to the final of the international competition Łódź Young Fashion Award 2019 and also to the final of the most acclaimed polish contest for young designers OFF FASHION, where won 3rd place. Collection was also exposured during KTW Fashion Week 2019 and has got incredible press response including Vogue Polska and Harpers Bazaar Polska.
During her study in Łódź she has worked for the renowned polish premium brand HEXELINE. She also got experience working with Ricardo Preto and Dawid Tomaszewski.
She is the winner of workshops Art&Fashion Forum 2017 by Grażyna Kulczyk in category fashion design. She won over the summer course in Central Saint Martins College of Arts and Design in London. Her works has been showcased at Central Museum of Textiles in Łódź and on MUST SEE 2019 exhibition. Her project where she reused textile trash with needle felting technique was qualified to the final of the international contest Fashioning Sustainability by Freudenberg Performance Materials.

In her collections Marlena usually oscillates between the areas of real and unreal worlds. Ambiguity, imagination’s exotica and transgression influence her the most. What fascinates her is finding bridges between concept and ergonomics of human body. Exploring traditional tailoring with trials to push boundaries. Responsible design is her main assumption. Her goal is to design useful, environmentally and body friendly cloths. 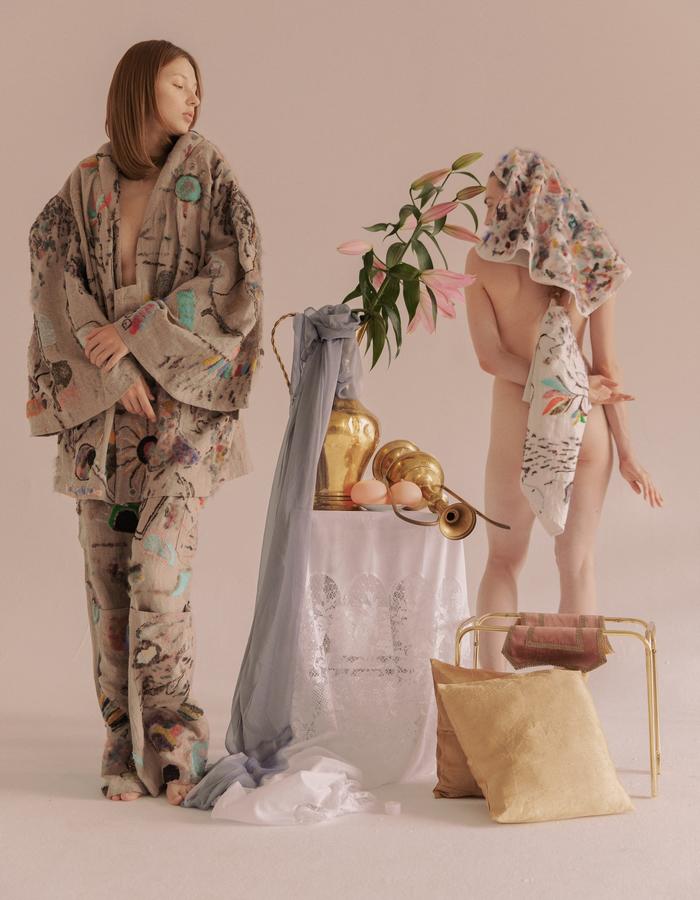 why me, why me

Special spiritual states are the main inspiration of the Collection „Why me, why me”. According to the designer's point of view, there are three things that can provoke the special spiritual state – Annunciation, afterimages and postimpressionist’s paintings. While experiencing the special spiritual moment you are always on the edge of reality, sanctity and imagination. That's where the ambiguity of the collection comes from.
The duality means also a meeting of two spheres - sacred and profane. Both were typical for italian proto-renaissance paintings from Siena and Florence. First one was strongly connected with the previous byzantine tendencies. While second one had first attepts to be more realistic. Simone Martini connects these two tendencies on his painting „Annunciation”. The image of the main character – Saint Mary – seems to be far from a typical sacral art canon. Her facial and body expression suggest her unwillingness to become a mother. She is close to say „yes”, but she still had not accepted her destiny. Her image is full of glory, but on the other hand it shows her as a human, as a woman. It is the moment when fear meets humility. After a while, all prejudicies disappears. Martini shows this short, eternal moment. For a while Saint Mary seems to escape into her inner world, full of naïve prejudices . Her attitude became main inspiration for a needle felting embroidery in the collection: sun, flowers, growing crops, sprouts, after- pregnancy stretch marks, bust and belly in different sizes.
Designer’s intention was to loose the contrast between sacred and profane. Therefore collecion contains both unique objects, as well as ready-to-wear garments. The designer simplifies patterns and uses machine instead of hand device. It gives different kind of felting, that is more likely to be worn and iron. Nevertheless garments remain unique, as the technique is very demanding.
Needle felting with fabric cuttings is designer's own invention. This technique allows her to make unique, double faced fabric. Left side is full of small after-production cuttings (garbage) which she puts on the fabric and then pricks with a needle. As a result on the right side we can see fluffy fibres - embroidery. Profanum (cuttings) turns into sacrum (fluffy fibres) through linen fabric. It took about 3000 hours to prepare fabrics for the collection.
...
Campaign of the collection is a three chapters fashion story. The main characters are the Virgin Mary and her alter ego. We can see how Mary changes and becomes integral with alter ego:
-Chapter 1-
City has its magical moments. Each year, at the turn of May and June, flowers lying on the street are being blown by passing cars.
Characters of the story are the Virgin Mary – Mother of God and her alter ego. Mary comes from the Trecento period. She was painted by Simone Martini in 1333 as part of his work “Annunciation”.
Martini’s Mary is magically moved to modern Warsaw. She is at a playground. Her journey seems to be a short refugee to the world of her own imagination. She closes her eyes and turns her face towards the sun. After a while, she is seeing afterimages – a visual alternative to Heaven. During the time of this special inner state, the boundaries between what’s real, sacred, and imagined are starting to blur. Sacrum is penetrating the metropolis.
-Chapter 2-
Mary is starting to become more and more integral with her alter ego. The boundary between reality and dream disappears. She explores the city in the night and, within it, finds a substitute for old familiar sacrum – shrines of Warsaw’s Praga. At times, she is an icon, the other times a girl from the metropolis. A rebellion is growing inside her, completely pervaded with longing.
-Chapter 3-
Mary is balancing on a border between worlds, a border between imaginary projections, and a border between personalities – her and her alter ego. During this special inner state, the boundary between earth and sky disappears.
Mary drifts away from sacrum. We witness her exotic journey. She is experiencing a special state of the spirit on earth. Where does naivety lead? Crazy, uncontrollable, and unreal projections of her imagination absorb completely, becoming the main narrative. It is dictated by the exotic nature of her imagination. Exotic means alien, extra, from the outside, in opposition to traditions. Exoticism is a refugee from our own reality and an awe at what’s undiscovered and unclear. We are driven by the need for what’s unfamiliar, different. Exoticism in Romanticism means transcending oneself. It refers to a boundary within us, which separates us from the unfamiliar, for which we long. Everything that lives only in the longing, memory, what’s distant, dead, unknown loses clear boundaries. Our imagination makes things infinite.
Mary, going down the path of the greatest Romantics, renounces what’s material in favour of experience. She backs from the outer world to the inner world. She is starting to see the reality that is inaccessible to the usual perception by senses. Her fantasy creates a non existent world, conjecturing about the unknown reality.
-THE END-
“Everything at a distance turns into poetry: distant mountains, distant people, distant events: all become romantic.” – Novalis