Born in Foligno in 1957 he designed jewelry for more than thirty years , first in Italy and then from 1982 in USA. In New York after working for other designers launched his first collection with the name “Mario Salvucci Jewelry” in the New Talents Show at the Artwear Gallery in 1985. His work is been represented by the Fragments Showroom in NY for fiftteen years and sold in the best american retail chains like Barneys and Neinan Marcus and also in Japan. His jewelry is been featured in all the major fashion magazines like Vogue , Elle and others. He did over the years private label work for companys like Ann Taylor and The Gap and others. Always researching new materials he started expanding his creative field into fabrics and interior designs. , in 1997 he received an International Design Award from IDRA for a project with recicled plastic. In 1999 after a trip in the Philippines and a collaboration with cooperative of women that made Abaca , a natual fiber handwoven textile , he started Progetto Lanterne with a show of lamps and photos at the Arce&Kwan Gallery in NY. In 2000 after a trip in India and a collaboration with a number of textile and embroidery handycraft people he created Kuri , a collection of shawls made from Tussar silk. In 2003 he return to live in Italy and start the new Progetto Lanterne with a limited edition series of prototypes of lamps , experimenting with different materials he return at the end to metal , lasercut alluninuim , and the “Elecrtic Flowers” materialize. In 2011 after ten years he return to jewelry and launch the new collection “Incredibile Creatures”. 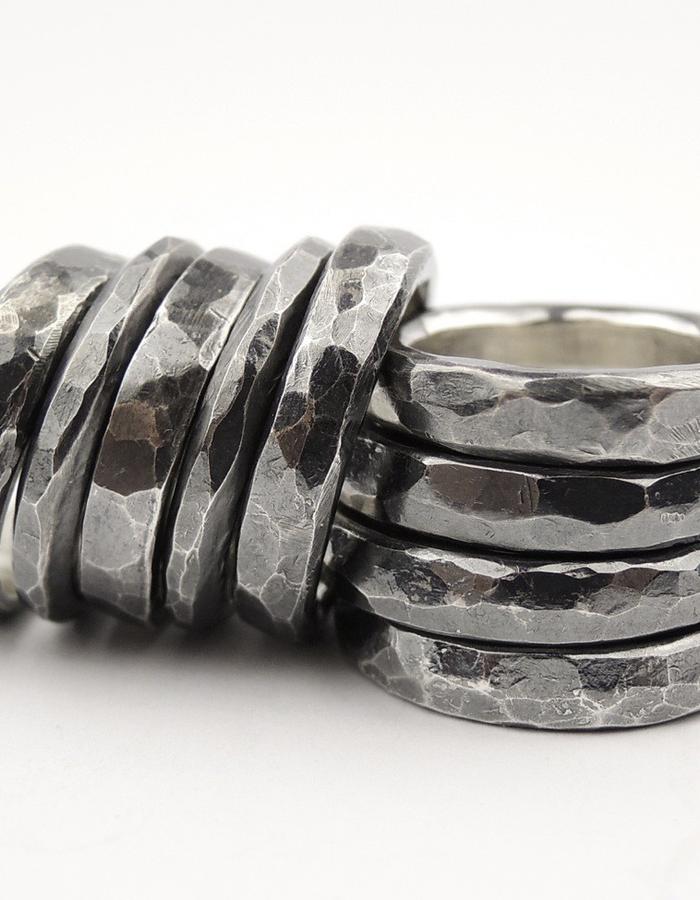 I imagined the end of the world and that my jewelry survived the big explosion.
Raw is what I imagined would look like.
Raw is a capsule collection made with 100% recycled silver naturally oxidized with sulphur.
Every piece is hammered by hand so each one is different and unique.