MAREUNROL'S was established in 2012 by two fashion designers Marite Mastina - Peterkopa and Rolands Peterkops. The brand is based in Riga, Latvia.
Winners of the 24th festival of photography and fashion in Hyeres 2009, they were the first in the history of the festival to win two main awards of the evening at once (Grand Prix L'Oreal and 123 award). Participated in such fashion and art events as Prague Quadrennial of Performance Design and Space (Czech Republic, 2011), Arnhem Fashion Biennial (the Netherlands, 2009 and 2013), BARCELONA 080 (Spain, 2009), ITS International Talent Support competition of new fashion designers (Italy, 2007), as well as presented themselves in Japan, France, Spain, Italy, Germany, Russia and Chile. Two years in a row (2006 and 2007), MAREUNROL'S were awarded as the best Latvian fashion designers, receiving the prize of 'Latvian Style and Fashion Award'. Latvian Theatre awards ‘Spelmanu Nakts’ awarded MAREUNROL'S as the best theatre costume designers of 2006. They have also made costumes for the National Opera of Latvia, receiving for the work ‘L'Officiel Latvia Special Prize’ in 2010. MAREUNROL'S has made costumes for the opera 'Eugene Onegin' for the Mikhailovsky Theatre in Saint Petersburg, Russia, 2012 (nominated for the prestigious Golden Mask Award as the best costume designer in the Musical Theatre/ Best Costume Designer category. German magazine Opernwelt, in its annual critics poll, has selected MAREUNROL'S costume design for the opera 'Eugene Onegin' as one of the best artistic achievements of the last season). MAREUNROL'S is included in the book "Pattern: 100 designers, 10 curators" (Phaidon, 2013, London, UK) as one of 100 most talented designers working today. MAREUNROL'S costumes were bought by the Latvian National Museum of Art for its archive collection. MAREUNROL'S costumes have been chosen for the group exhibition "ARRRGH! Monsters in Fashion", which has been travelling to different museums in Europe (La Gaite Lyrique. Paris, France/ Benaki Museum. Athens, Greece/ Centraalmuseum, Utrecht, Netherlands). MAREUNROL'S collections are concept based. Their designs are usually accompanied by specially designed sets, scenography, video projections, installations, photography, i.e. any creative outputs that help to communicate their story. Both designers constantly look for new mediums and ways of presenting fashion, and search for new art disciplines that could be incorporated into the world of fashion design. This is why at MAREUNROL'S shows the work might seem to be avant-garde, but in reality it is ready-to-wear fashion. MAREUNROL'S wants to show an existing environment that is not always evident, though it is right in front of our eyes; combine reality with a feeling of surrealism. It is very important for them to give purpose and meaning for every detail, and that the clothes they create tell their own story and live their own lives. 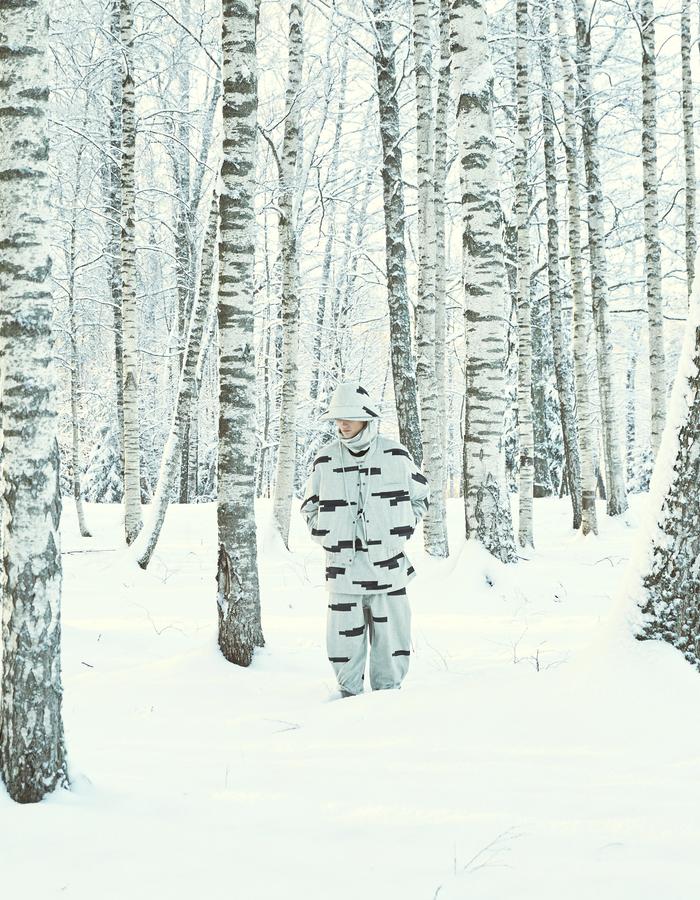 Unexpected Sources is a series of stories about unexpected coincidences; about information that comes to us through simultaneous fixation of a number of things existing concurrently - sound, space, noise, anything that is around us. The first story of Unexpected Sources is based on a relationship between a poetic illustration of forest landscapes and a wall of the modern urban environment. The wall that divides society, social space, private property, religion, thoughts, beliefs, culture and countries. The wall as a symbolic stamp of territory in the architectonic urban environment. The collage for
Autumn/Winter 2016 collection includes the sound paintings of the American avant-garde composer and minimalist John Adams. The mood of the collection is based on the associations with a hazy winter frost, landscapes of birch trees, the austerity of fishermen villages that can be found close to the Arctic in the North of Norway, the materiality of woollen clothing worn by the people living there. The constructions and pat- terns of the collection are based on pure three-dimensional shapes and geometric squares. The patch- work in the collection is our interpretation of the birch pattern and texture.The collection includes woollen coats, sweaters, jackets, trousers, shorts, winter T-shirts, woollen hats, and accessories.