Marco Rambaldi, born on 17 December 1990 in Bologna, after graduating in graphic design and product design he graduated in 2013 in Fashion Design at the IUAV University in Venice. His first collection was presented in February 2014 during Milan Fashion Week, and for the occasion he won the Next Generation competition sponsored by the Camera Nazionale della Moda Italiana. From 2014 to 2016 he worked as womenswear designer for some of the most important brand of Made in Italy in Milanalways producing his eponymous collections. In 2017 Marco Rambaldi is a finalist of the competition Who's On Next? organized by Altaroma and Vogue Italia.
Last 27th of January he presented his last Fall/Winter 2018 collections at Altaroma entitled VOGLIAMO ANCHE LE ROSE // WHAT ABOUT THE ROSES?.
The same collection it was presented last February at WHITE as Special Project during Milan Fashion Week. Also for the occasion it was presented his first short movie called like the collection “Vogliamo anche le rose”. 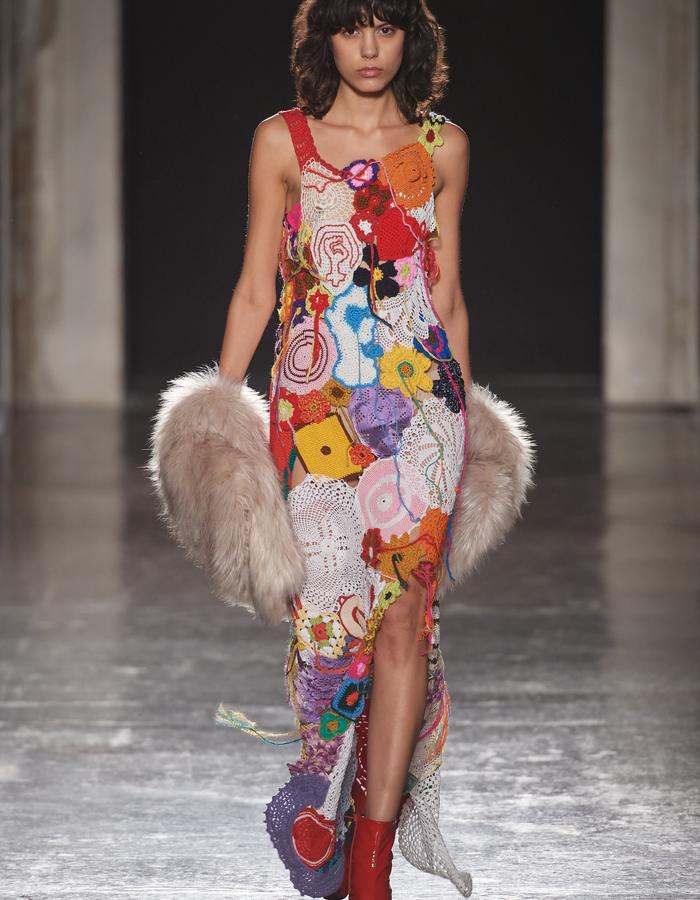 The Marco Rambaldi collection for Fall Winter 2019/2020 takes its starting point from the work of Marcella Campagnano collected in the book “ROLES” of 1974.
The photographic volume narrates the feminist radicalism of the seventies depicting women who, with tricks and disguises, interpret the various roles that the social imposes on them, moving a direct critique on the limits and the narrowness of a preconstituted and masculine society.

Marco Rambaldi reviews the social characterizations in a contemporary key and in a seemingly light way, highlights its fluid character in becoming less anchored to specific schemes and more reactive to changes.
It’s a photograph of today, in which strong progressive forces fight against reactionary attitudes, in which conservatism and free thought manifest as tendencies in opposition and struggle.

Each outfit represents a different prototype of a woman: the manager, the lover, the activist, the prostitute, the transsexual, the student, the heroine. Representations are deliberately not coherent because the feminine today is increasingly a research territory, much still to be explored.

The collection traces, if possible in an even deeper way, themes that in a short time have built a personal and recognizable aesthetic: color and decoration, the passion for outerwear and knitwear, the synthesis between masculine and feminine and the mix of high and low Italian culture, popular and academic.

The formal structure starts from the rules of the male wardrobe through the rediscovery of classic sartorial constructions and passes through the pure feminine joy. Coats and jackets are made with great attention to details, clothes and knitwear are always printed and made with the jacquard technique.

The decoration is, as always, extremely articulated through the recurring collage print, the peacock design, used both on the fabric and on the knitwear, the writings of the female roles and the jacquard that represents a tangle of bodies and faces.