BASED BETWEEN THE USA & UK, Longshaw Ward is a Womenswear and Accessories label founded by husband and wife team Kirsty Ward and David Longshaw, who met in the design studio of Alberta Ferretti, in Italy. Longshaw Ward has shown on the catwalk at London Fashion Week as well as internationally including in China and Eastern Europe.

Kirsty Ward is a Womenswear MA graduate of Central Saint Martins. Selected for a wealth of prestigious projects she was part of Selfridges Bright Young Things, selling in store and creating her own Oxford St window.
Statement jewellery has always been a strong aspect of the brand, this coupled with a defined signature handwriting in her ready-to-wear line, lead to Kirsty being championed by VOGUE Italia in two exhibitions in Milan, she has been stocked internationally by prestigious stores including Comme Des Garçons Trading museum in Paris and Tokyo where she collaborated on a mens and women’s monochrome jewellery collection. Kirsty and her designs have been featured in magazines such as, VOGUE Japan, VOGUE Italia, ELLE, Grazia, L’Officiel, Nylon.

David Longshaw graduated from the Womenswear courses of both St Martins (BA) and the Royal College of Art (MA). Longshaw has design experience at Alberta Ferretti, Max Mara and time as Creative Director of a luxury Chinese brand. David’s strong illustrative style has lead to collaborations with Triumph, NailsInc, Michelin starred restaurant Yauatcha, Harrods and the creation of windows for stores including Matchesfashion.com and luxury London Knightsbridge store Feathers. David has written and illustrated 5 published ‘fashionable children’s tales for grown-ups’. He has contributed to a number of magazines including illustrations for vogue.co.uk, a series of comic strips for VOGUE Italia and animations for LOVE magazine.

Longshaw Ward is a collaborative label focusing on designing luxury, forward thinking pieces for modern, intelligent women. Covetable contemporary pieces with a strong aesthetic are the main principles of the brand’s DNA. The collections concentrate on beautiful, detailed craftsmanship. With all pieces being made in the UK, using thoughtfully sourced fabrics and materials. The creative partnership has it’s own unique handwriting to that of the duo’s previous labels. The brand still echo's Wards strong jewellery techniques, garment layering and masculine style with Longshaw’s more draped, feminine and hand drawn aesthetic. 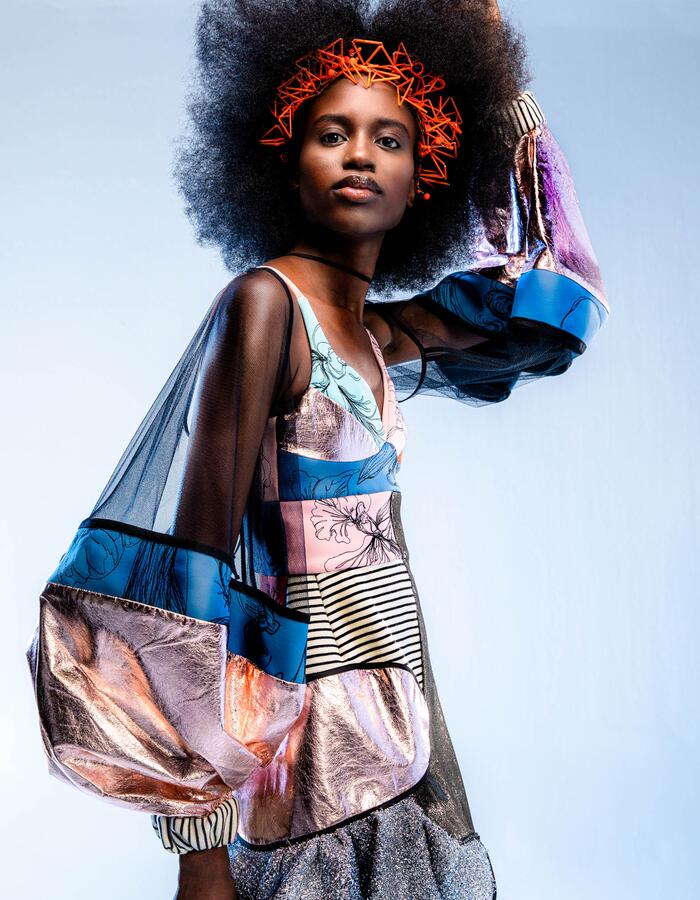 COLLECTION 8-
CONSTRUCTED FROM UP-CYCLED FABRICS FROM OUR STUDIO.

we continue to explore the notion of impractical outerwear, with non traditional fabrication, specifically net parkas and trench coats.

WHILST EXPERIMENTING WITH explosionS of net, hand knotted and woven over a grid frame, each take over a week to make. We have taken this technique in to skirts and dresses, adding woven tulle with beading.