Lesiba Mabitsela is a South African interdisciplinary artist and Fashion Practitioner born in Pretoria, Gauteng (1987) and is based between Johannesburg and Cape Town, South Africa.

The former Tshwane University of Technology graduate in Fashion Design and Technology has gone on to work for fashion design houses such as St. Lorient Fashion & Art Gallery in Brooklyn, Pretoria and Gavin Rajah Atelier in Cape Town before carving out his own unique vision in the space between fashion and art.

Mabitsela is a former recipient of the Andrew W. Mellon Foundation scholarship contributing to the completion of his Master of the Arts degree at the University of Cape Town’s Drama Department within the Faculty of Humanities. He was part of a cohort whose practice was guided by the multidisciplinary studies offered under the auspices of the Institute for Creative Arts (formerly known as GIPCA).

All garments are made to order.

please contact us by email about garment purchases or For more info, including enquiries on original photographic prints and bookings please send mail to: 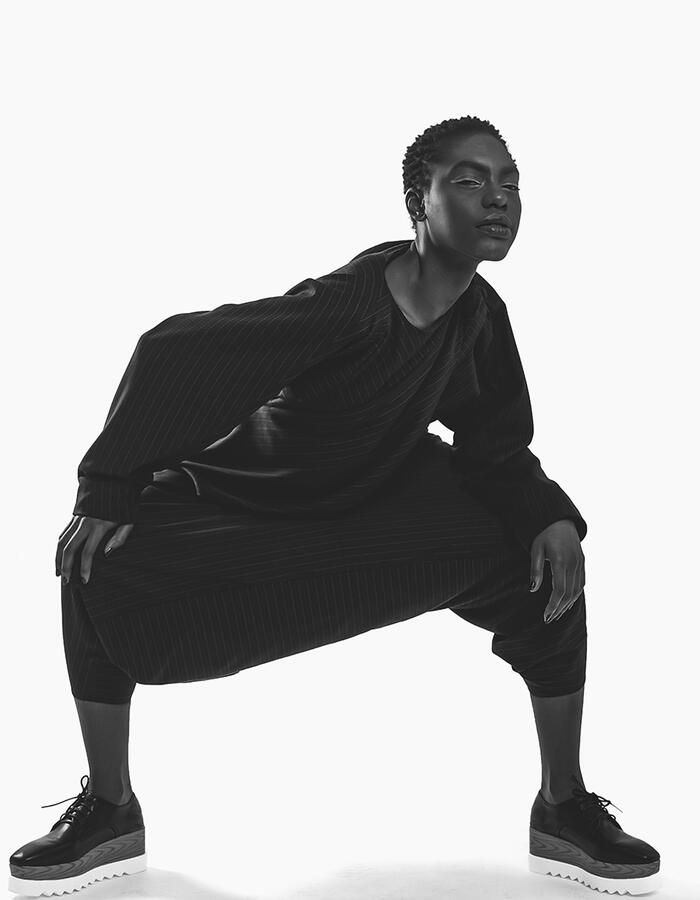 {Re} Institute is an interdisciplinary project that was nurtured and came into being following my early interests in a design process routed in the idea of an authentic African fashion aesthetic.

The project matured following the completion of my Masters Degree in Theatre and Performance at the University of Cape Town (UCT), where in the relationship or space between the body and cloth is pushed into focus. The Japanese, including the renowned fashion designer Issey Miyake call this space Má further stating that each body has their own unique Má (English, 2011).

Má is also a compositional relationship that values the use of negative spaces, particularly observed in ancient art works from the Far East (English, 2011). These thoughts brought me to the significance of the draped body: drapery as an aesthetic, drapery as resistance and therefore the democratic nature of draped, partially worn or over-sized garments as decolonial. The Historian and Academic duo of Anne Hollander and Phillipa Levine suggests a theory for this performative potential of the draped body as “states of undress” - the former for the stylistic potential of the draped male figure and the latter for the performative act of the naked colonially “othered” body. They argue that these states of undress have often been used as forms of resistance against imposed forms of British masculinity during the Victorian Era and as displays of colonial resistance cunningly used by figures such as Mohandis Gandhi, Kwame Nkrumah, Léopold Sedar Sénghor and Nelson Rolihlahla Mandela where the classic three-piece suit was often chosen as the garment to be discarded.

The socio-political significance of the suit as a symbol of affluence, aspiration and dominance, gains even more cultural symbolism as the final visual marker of accomplishment - now not only in the everyday of cut-throat corporate capitalism but also in the rights of passage of young African men in traditions that predate the advent of colonialism. This also brings into question ways of being – the performance of a certain type of masculine ideology inserted into the construction of a suited male figure including the hierarchical institutions that harbor these ways of being through the by way of uniforms and code of conduct.

As a result, a quick study over African forms of attire bring into question the obvious presence of draped or over-sized clothing, including in the diaspora i.e. African American communities and their influence in counter-culture movements such as hip hop and street fashion. In essence, if one had to strictly look into aesthetic values of African attire based on silhouettes alone then a pattern of stylistic preference starts to emerge. The draped figures that emerge stands in sharp contrast to the fitted look of the West, particularly the fitted three-piece suit which gains special significance for me as a young, black, African man with a Catholic upbringing.

The first journey of {Re} Institute is therefore explored as an intervention informed by ideas around States of Undress and performed through speculative methods of design by reimagining the traditional pinstriped suit through stylistic changes. The construction of the classic three-piece suit has been altered through the use of drapery made from a pattern system influenced by the shapes most prevalent in forms of African architecture, jewelry, craft and typography.
The second theme of {Re} Institute is aimed as a site-specific archival project, often using the idea of labour to critically question cultural institutions where African forms of production is harbored, displayed or written about. The archival project is a trans-disciplinary and often uses multiple digital means in display of the activation.