LAKE (earlier known as brand KAMENSKAKONONOVA) is a designer brand of women’s apparel, footwear, accessories, founded by Natalia Kamenska and Olesya Kononova.
Based in Kiev, Ukraine.

Brand LAKE was highlighted in the Vogue.it 'Vogue for the Young' section and named Vogue's Choice of the Best Projects.
In September 2013 LAKE became a part of “Vogue Italy” magazine, appearing in its annual edition of “Vogue Talents” among chosen 200 emerging designers from all over the world.

Natalia Kamenska and Olesya Kononova design for contemporary urban woman with a big-city mind. Not because she indispensably lives in a big city but because she has that type of lifestyle when she travels a lot, has inner freedom and is keen on art, architecture, and history. However despite her active character and the rush of modern world this woman appreciates her inner harmony. She values the essence of things and her own essence primarily. The concord of nature, solitude, asceticism and such attributes of modern world as high-tech architecture and new technologies could be retraced in LAKE design. LAKE is defined by its emphasis on tailoring, craftsmanship and attention to detail. One tailor sews every piece individually from the beginning to the end; artisanal seams and finishes are quite common. Many clothes are unique or produced in limited series. All wear is manufactured in Ukraine. LAKE collections are featured in Vogue.it, Vogue Russia, Vogue Ukraine, Collezioni Italia, Close-Up Italia, Institute magazine, ELLE Russia, ELLE Ukraine, ELLE Polska, Glamour Russia, InStyle Russia, Harper’s Bazaar Ukraine, Marie Claire Ukraine, Cosmopolitan Ukraine. 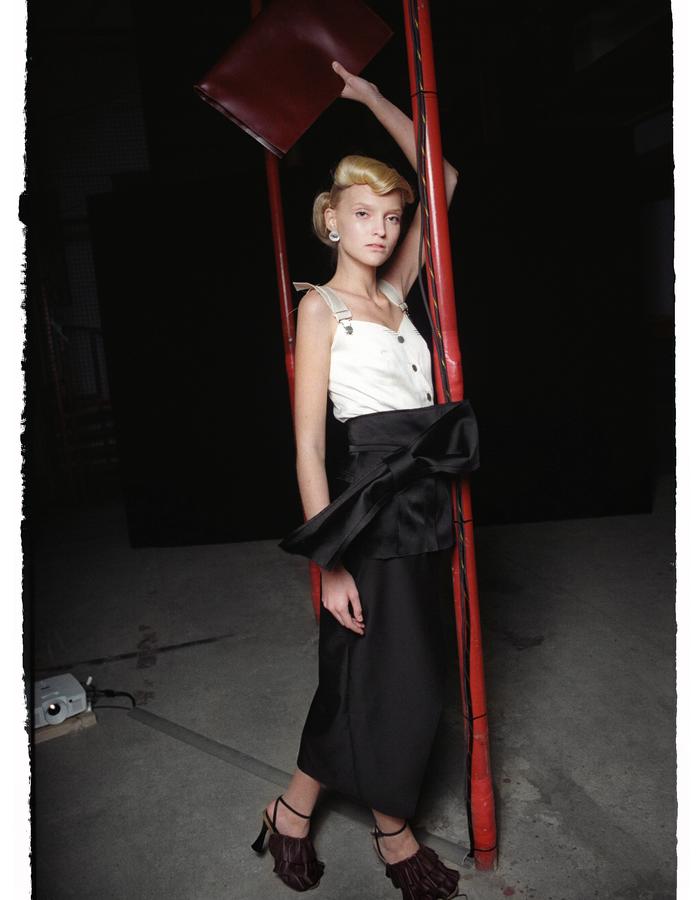 American 50s have become the starting point of the collection: perfect housewives of New Jersey, female flowers with thin waists and curly locks.

The hypertrophied femininity of the past era can be traced in a new collection by LAKE in delicate hints. The looks of the collection are finished with corset belts resembling the top of high-cut trousers. Silhouette of voluminous clothes in dense form-keeping cotton or rough leather is formed with the help of high vertical tucks around the waist and hips. Sweet floral prints are applied to the utilitarian things of masculine cut.

Bright details complement the bright collection. Those details are inspired by sketches of clothes of Italian futurist Giacomo Balla with sophisticated graphic prints and bright colors. Monochrome palette of the collection is diversified with flashes of light green color. Uniform pants, jackets and trench coats have deliberately large cuffs. Belt buckle is made in the form of a bulk loop. Ruched major ripples cover straight knitted dresses and pants and slippers in satin, which are used as casual shoes.

The new collection by designer Olesya Kononova continues to compare gender opposites: the harsh textures and styles of men's work uniforms are transferred to the women’s wardrobe. The cut of a square working jacket becomes a base for shirts, light coats and soft rounded shoulder line dresses in thick cotton. Wide trousers are made in streaming fabrics and complemented with pleats at the waistline. A number of uniform items in dense materials complement the iconic Lake silk robes which this season has been made in textured silk.

"I am primarily interested in how women feel themselves in the clothes. The items of the collection do not wrap, they rather envelop the body. They are about comfort and confidence, whereas the collection itself "tells" about more about lifestyle rather than about an ideal wardrobe or look, "- comments designer Olesya Kononova.