Kit Woo grew up in a small town in Malaysia,
although growing up without much exposure in fashion;
Despite his tremendous interest in the world of art and design.
Woo took a 2-year Advanced Diploma course majoring
in apparel design and merchandising in
First Media Design School, Singapore.
He was awarded with the Overall Best Student in
Fashion Design and Merchandising
during his education in Singapore,
Woo interned with two companies at the same time.
A menswear design trading company, Green Lite Trading,
there he was a menswear shirting designer.
And he also interned as an assistant professor
at First Media Design School. Woo taught hand and digital flats.
After completing his diploma,
Woo catapulted himself to the United States of America,
and attended Pratt Institute, majoring in Fashion Design.
Woo has entered in various competition including,
Met’s Punk: Chaos to Couture Design Competition 2013,
Cotton Incorporated Design Competition (2nd runner-up) 2014,
and CFDA Scholarship Award 2014.
During the course of his education,
he has interned for Melitta Baumeister,
Public School New York,
and volunteered as back stage dresser for Zang Toi
at New York fashion Week. Upon graduation,
Woo was hired as an assistant menswear designer
for Public School New York before returning home in 2016.
Kit Woo’s aesthetic challenges the whole notion of the “right fit”
and rejects the “sexiness” that everyone is thriving for.
He finds dressing away from the body projects modesty
and coolness with a hint of mystery.
Woo is now based in Kuala Lumpur, Malaysia. 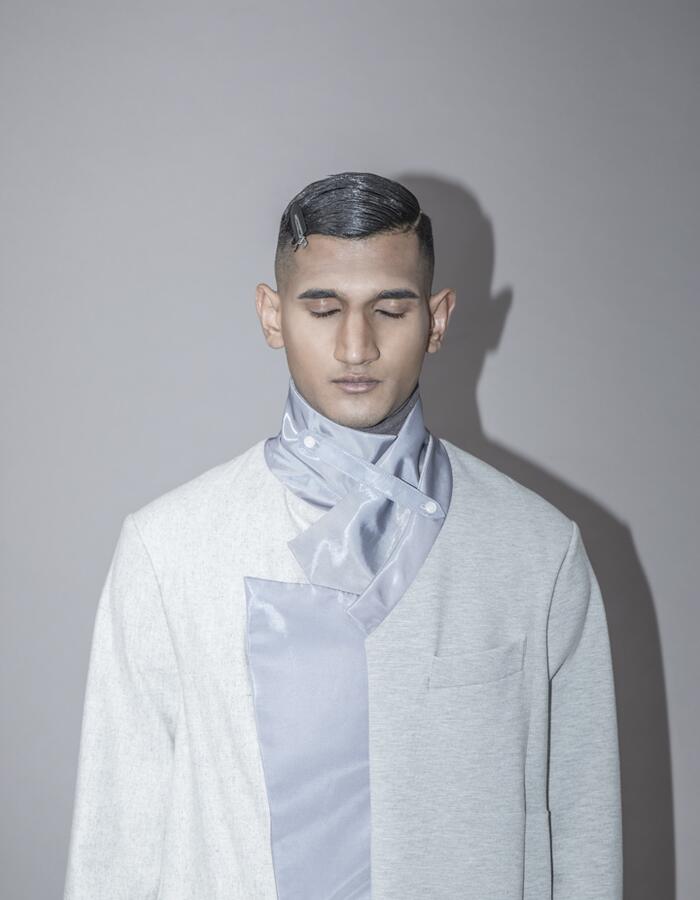 INSPIRED BY THE FLUIDITY OF TRADITIONAL MONK ATTIRE, THIS SEASON, KIT WOO CONTINUED HIS ART THROUGH THE STUDYING OF DRAPES AND CONSTRUCTION OF MONK ROBES. BY COMBINING WESTERN TAILORING AND EASTERN TRADITIONAL MONK ROBES, FUSING THE PRECISION OF TAILORING AND SOFT DRAPING, CREATING A HARMONY OF TEXTILES, DETAILS, AND CONSTRUCTION, THIS SEASON, WITNESS THE DIFFERENT RELAXED-SILHOUETTES, HYBRID STYLES AND INTRICATE DETAILS THROUGH THE PROCESS OF DECONSTRUCTING WESTERN AND EASTERN TRADITIONAL GARMENTS.