Born in Perth, Western Australia, Kira Goodey initially worked as a costume maker and fashion designer, before moving to London to work as a print designer for Alexander McQueen. Goodey then embarked on a shoemaking apprenticeship with London based bespoke shoemakers Paul Thomas and Iliaz Iliazi.

Goodey’s practice is rooted in traditional craftsmanship, where focus is placed on quality, precision and individual artistic expression; no two pairs of shoes are ever the same. Experimentation with both orthodox and innovative materials informs the design process which embraces both traditional techniques and modern technologies. Grounded in her traditional training, Goodey's shoes are all completely functional. However, Goodey enjoys pushing wearable footwear to its creative limits with her highly sculptural work.

The designs are underpinned by a fascination with the interplay between dark and light, good and evil, virtue and vice. This dichotomy is evident in the bold use of colour palette and fetishistic symbolism. The shoes embody a form of combative sexuality that is alluring, intimidating and often humorous. This is achieved by a combination of factors, such as the overall height, subverting gender along with nods to body armour, predators, bondage and visual puns.

Goodey's shoes have been shot by renowned photographers such as Steven Klein and Hype Williams and worn by celebrities including Lady Gaga, Britney Spears, Tinashe, Erykah Bardu, Kylie Jenner, Jhene Aiko, Taylor Hill and Brooke Candy. Her shoes have been exhibited in Tokyo, London, New York, LA and Milan and she has also collaborated with Adidas, luxury accessories label Le Snob and Australian demi-couture designer Jaime Lee. Goodey recently completed a Master’s degree in footwear at the prestigious Royal College of Art in London and now hand crafts her sculptural creations from a studio in North London. 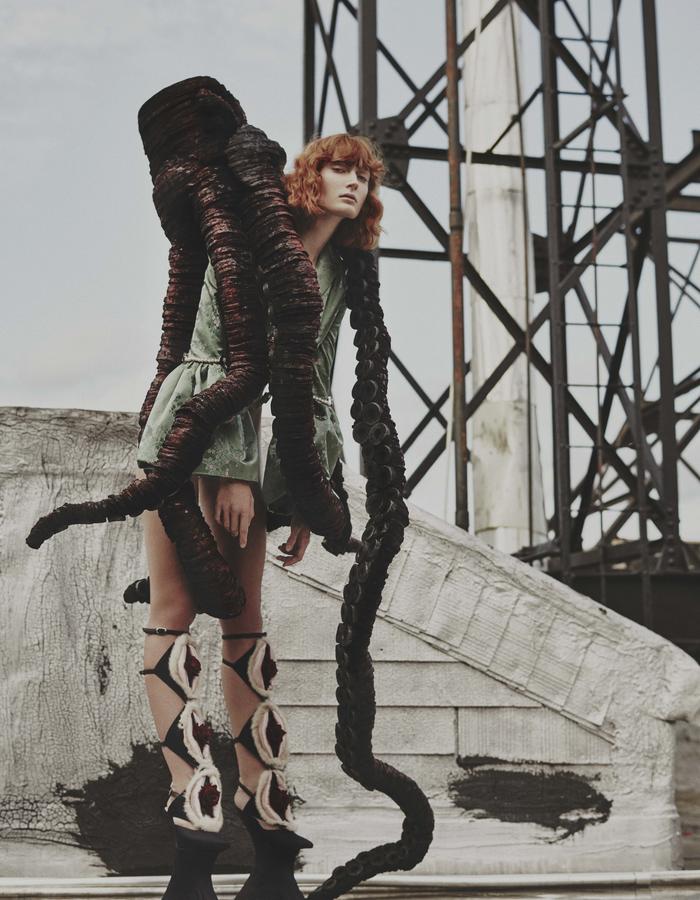 Kira Goodey created the footwear for Berlin based womenswear brand Namilia's SS18 collection 'The Indiscreet Jewels' which was presented during New York Fashion Week . Both Royal College of Art graduates, Goodey and Namilia were connected by fellow alumni and a mutual admiration blossomed into an electrifying collaboration. Both passionate about creating rebellious and audacious fashion, the footwear that resulted is a thrilling blend of historicism, fetish and couture detailing. The signature 12-inch platform silhouette is inspired by chopines – a towering Venetian overshoe worn from the 14th-17th centuries to protect the wearer from the dirt of the filthy streets – Once again the shit is piling up, so its time for shoes to be elevated according. The height also allowed the wearers to tower over their peers and was a symbol of high social status. Other surprising details such as long silk trains, stripper heel platforms and plush vaginas on the footwear offer a fresh, dramatic take on couture footwear.