Kim Shui was born in the US, and raised in Rome, Italy. She graduated from Duke University with a double major in Economics and French before pursuing Fashion Design at Parsons The New School for Design, New York and Central St. Martins, London where she graduated with Distinction.
In February 2016 she was selected as one of the VFILES Runway winners and debuted her Autumn/Winter 2016 ready to wear collection at NYFW.
​Sponsored and selected by Vogue Italia, she exhibited Autumn/Winter 2016 at Pitti Super Talents in Milan. She was also one of five designers selected by Not Just a Label to show under full sponsorship at Capsule NY.

In 2015, she was one of ten designers selected for the prestigious International Talent Support Competition and Samsung Galaxy Award. She collaborated with Samsung in creating wearable technology and designing a phone case for them.

Her work was published in Terrific Fashion, a book edited by Cristina Morozzi for the Italian publishing house 24 Ore Cultura alongside designers Philippe Starck, Fratelli Campana, and Alexander McQueen. In 2014, she won the Media Award at the opening of Mercedes-Benz China Fashion Week - International Young Fashion Designers Competition in Beijing, China and was also selected for "The Future Now" International Young Designer Exhibit of Beijing Design Week. She was a finalist in the 2013 Mittelmoda International Fashion Award in Milan, Italy. 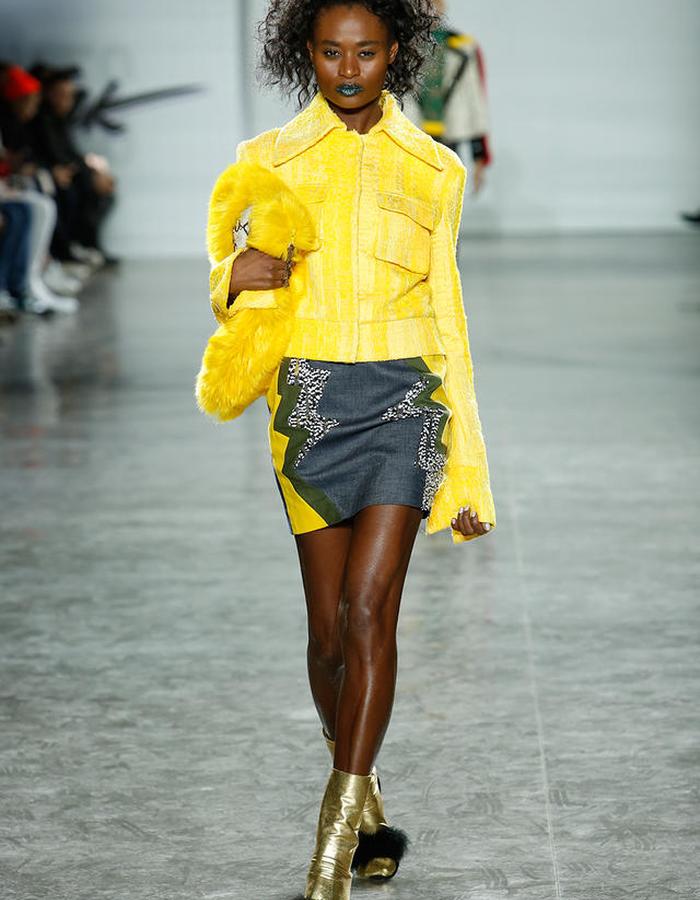 Energetic, bold and eccentric, Autumn/Winter 2016 is inspired by the colour, shapes and textures in the artwork of Kandinsky and aims to reformulate established conventions. The collection subverts traditional femininity and blurs the boundaries between the beautiful and the ugly by integrating dissimilar materials, shapes and colours.

Selecting materials that are considered outmoded or overused in fashion such as lace, sequins, fur (faux), and snakeskin; textiles are combined in such a way that they shed their ultra-glam and hyper feminine overtones as they slip into a cool, off-kilter élan. Graphic geometric shapes of Italian lace are carved into glossy snakeskin leather, and classic plaid is disrupted by bright-coloured faux fur.

All textiles such as the Italian lace, 100% Virgin Wool and more were sourced from mills in the Tuscan region of Italy.