I STARTED TEADITIONAL PAINTING WHEN I WAS 8 YEARS OLD. DURING MY LIFE JOURNEY, I LEARNED MUSIC, DID CALLIGRAPHY AND SO ON. SURROUNDED BY THE ENVIRONMENT OF ARTS BUILT BY SENSE OF AESTHETIC.

TO ME, FASHION IS THE WAY TO EXPRESS THOUGHTS AND MYSELF TO THE WORLD, THE SAME WITH OTHER KINDS OF ART. THERE ARE SO MANY LOVELY CURVES INSPIRED ME IN DAILY LIFE OR ART PIEACES. I ADOPTED THEM IN MY WORKS. PAINTING PLAYS A VERY IMPORTANT ROLE IN MY LIFE, SO I COMBINE IT IN MY FASHION WORKS.

IN FAHSION WORLD, MY CREATION IS MY INTERPRETATION OF VIEWS TO OUR DAILY LIFE. 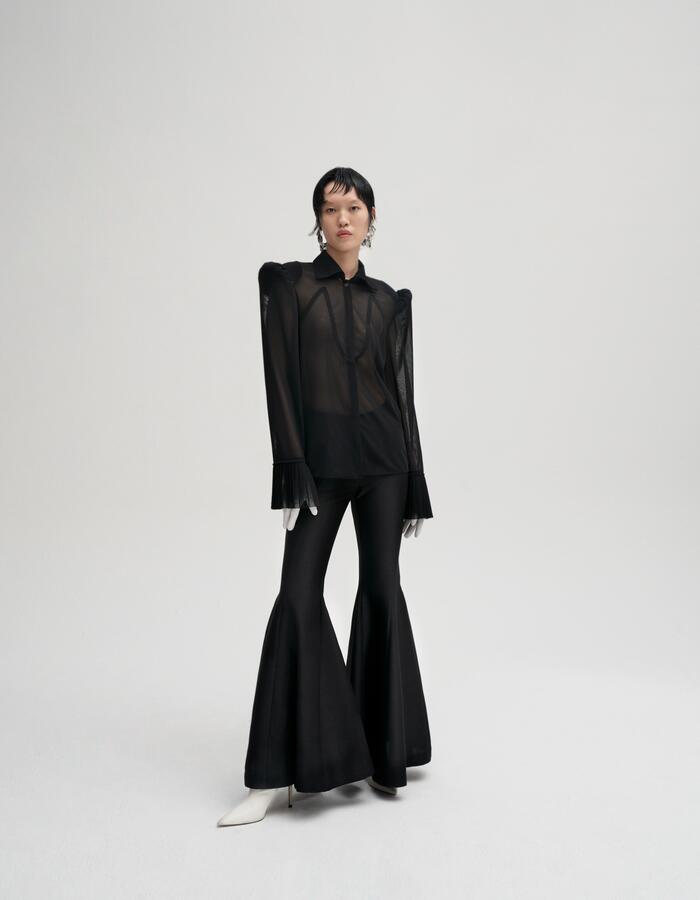 The silhouettes are the forms and the prints are the spirit that reflected.
This is a collection finding and building the inner power of women.

Bringing the silhouette and details from the 1990’s is the character of 2021 SS collection. Cutout dresses, fitted silhouette, transparent fabric, smart casual, inside-out styling, Bell flares are important elements of the collection. Directed by the concept of reflection, IKYIS retell the story by padding the garments to convey the ideal of deformed curves. The combination of reflection and actual structures sculpted the new silhouette.

This collection is created to tell the stories of Chinese women in the 90’s.

The 1990’s are characterized by the rise of multiculturalism and alternative media. They represented continuing social liberalization. While third-wave feminism spread around the world, Chinese women started revealing their independent characters. Group of female writer’s were born with their feminine literature. Jumping out from the traditional masculine supremacy, they wrote by their feminine perspectives and their own languages. “Mirror” was common image in the literatures which used as a space for women to talk to own self. “Mirror” reflection directed the design of silhouette and details. The deformed curves which reflected in the mirror were brought in actual garments.

This collection is created to find the shared spirit between now and the 90’s.

This season, the process of print making is the hymn for feminine consciousness.

Inspired by the female writer from 1990’s, this season IKYIS collaborate with artist Lui-Jia whose painting works are discussing the fluid of power. IKYIS made her 3D painting ninto 2D digital print. Then, making drape following the pattern of the print. The process brought 3D into 2D, then transform 2D back to 3D. The process is the interpretation of how a woman looked at her own reflection in the mirror, how she saw her own character, and finally built her confidence.

Both 1990’s and the time we live in are changeable era. Women in the 1990’s build their inner power by revealing their independent personalities. They get to know oneself’s characters, embrace them and find the confidence under the unpredictable period. It’s the spirit that women from both era need to against the noisy world: the courage to stand for one’s own attitude and the bravery to make one’s voice.