Standing as an intermediary between the past , present and the future, Joteo tempers a drive for innovation with a sense respect for traditionalism. Defying the restrictions of 2-dimensional patternmaking, the house works in the 3D, using a combination of couture draping and savoir fare tailoring to create architectural forms that while familiar, are disconnected by an otherworldly elegance.

our manipulation techniques and sculptural forms extend the boundary of the body with both protective and insulating connotations; Their curved symmetry juxtaposed against strained folds allowing the female form to appear as if it has armed itself with a transcendental force that it has summoned from the ether.
At current, the house operates in a small capacity, only having been conceived last year. While the house does offer small ready-to-wear ranges at our Winn Lane stockist, Practice Studio, its true pride lies in our made-to-measure and couture for which we are proud to say have found its way to many international locations and publications, a recent example being Seoul Fashion Week S/s 2020. 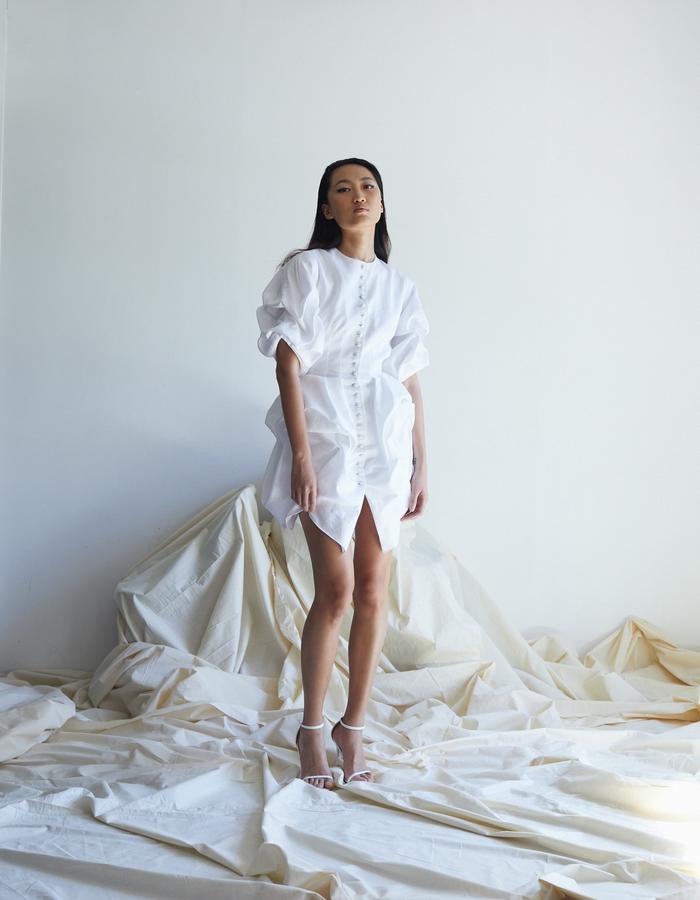 Finding its focus in the realm of emotion, Ephemera delves deep into the mental abyss of dark emotional states, evoking imagery of shadowy spectres used to represent the states of depression. Defying the restrictions of 2-dimensional patternmaking, the garments distort the female frame, contorting natural proportions to connote the visuals of the clothing being possessed. Through a combination of couture draping and savoire faire tailoring, the immaterial darkness is materialised in silhouettes that extend the boundaries of the body, emphasising a strained architecture that bend the fabric to mimic the fluidity of flowing shadows. Protective and insulating, with curved lines and folds that generate a feeling of guarded femininity, the garments are at the same time familiar but disconnected in their other-worldly elegance, shrouded in an unnatural iridescence, offering its audiences a glimpse in the ephemerality of emotion.