Born in India and having the opportunity to travel and live in many different parts of it, Jeetinder has had a chance to see and experience the art, traditions and life in several parts of India. Rajasthan a western state in India was his birth place which over the years has played a significant role in inspiring him for art and design. Originally from the Northern state of Punjab, Jeetinder often travelled back home to visit his family and had a great time experiencing a different lifestyle as compared to the other parts of India. The rich traditional and cultural heritage of Rajasthan and Punjab are very evident in his designs. Jeetinder's mother used to own a shop in Patna, the capital of Eastern state of Bihar where he lived for 12 years. His mother's store sold Rajasthani cultural and traditional goods. Having had such a strong connection with the cultural side of India, Jeetinder developed an interest for the art and handicrafts at a very early stage in his life. His aim is to mix the various art forms of handicrafts in India with an innovative twist for a modern clientele. He lived in Delhi for almost 7 years before moving to London in 2010 to do a BA in Fashion Design at Istituto Marangoni. He showcased his final year collection at Graduate Fashion Week 2013. His design aesthetic mixes his rich Indian heritage with modern ideas & concepts and bridges the gap. Since graduate fashion week, Jeetinder has dressed celebrity singer Patrick Wolf for several performances. Jeetinder also produced a short fashion film called "Dyadic" in july 2013 for his collection with film-maker Sebastian Mantilla in London. 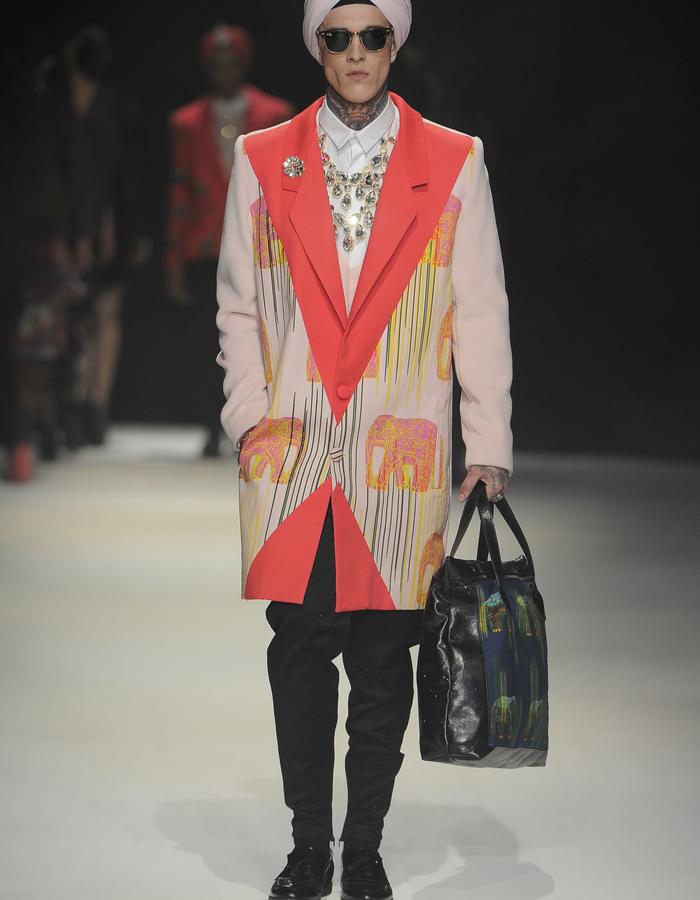 Having taken inspiration from his Indian roots, Jeetinder mixed colors and created prints keeping India as his main focus. The military represents the mood of this collection, a man who is strong and confident yet still is a bit quirky and fun which reflects in the collection's colors and prints. The elephant print emerged from the concept of military as they were used to fight in wars in India. Being a significant part of Indian culture and arts, the elephant was made the focal point of this collection by creating colorful and vibrant prints. The collection has interesting seamlines and pocket details to create a modern look. Hand tied turbans in different colors and custom made jewelry complete the look. The jewel necklaces were custom-made in India. The bags in the collection are a collaboration with a company called Jas M.B with whom Jeetinder had the bags produced.