Half-Indian, half-Norwegian, 23-year old designer Helena Bajaj Larsen was born and raised in Paris. After receiving a Baccalaureate in Economics and Social Sciences from the Ecole Alsacienne with highest distinctions, she moved to New York where she pursued a Bachelor in Fashion Design at Parsons School of Design.

Her focus from the start has been on textile design and textural explorations in surface design through various mediums. She attended Central St Martins in London for a semester abroad in a program centered solely on Print Design. Internships during university include Rohit Gandhi + Rahul Khanna, Vogue, Mary Katrantzou, Thakoon and others.

When her final year at Parsons came around, students were asked to create a senior thesis which told a story but also showcased the range of skills they had acquired over four years in school. Helena chose the topic of khadi. Khadi constitutes an Indianhomespun cotton cloth often referred to as “the fabric of social change” due to its
crucial role in the Indian Independence movement led by Mahatma Gandhi. Her thesis By this very name is a contemporary take on an old story which is both close to her heart as it reflects her family history but also embodies her passionate relationship to textiles.

The fabrics for the collection were sourced from Khadi shops around India and hand-painted using acid and pigment dyes on a variety of silks and other materials. In parallel, Helena began exploring metal work as part of an elective at school and decided to present a jewelry collection focused on surface alterations as a part of her thesis.

During the last few weeks of her final year at Parsons she was a finalist for the Eyes on Talent Award, the Parsons Future Textiles Award, the YOOXIGEN by Net-a-Porter Award, the and the HUGO BOSS Innovating Impact competition. Additionally, she was selected for the CFDA Fashion Future Graduate Showcase which resulted in an exhibition of the work by 69 chosen (by the Fashion Design Council of America) design graduates across the US across fashion, textiles and jewelry.

Following graduation in May 2017, she was given the opportunity to complete a Design fellowship in Haiti led by Donna Karan and in partnership with Rihanna's Clara Lionel Foundation. Every year Parsons selects three students to send down to Haiti for the summer and develop a range of products with the local artisans at a design training center in Port-au-Prince.

This September, she received the opportunity to film a television episode onboard the Queen Mary 2 Ship for the show Vacation Creation, airing on ABC. The ship was doing a special "Transatlantic Fashion Week" trip during the first week of September and the show was looking to pair the voyage with a young Parsons graduate for their episode. Additionally, she was one of the six Parsons graduates invited to participate in a fashion show onboard which over 400 people attended.

Recently, Helena was shortlisted for the Grazia Young Fashion Achievers Award and was one of the top 20 finalists for the WGSN X ARTS THREAD Future Creator Award. She was also one of the 5 selected young brands of the Lakmé Gen Next Mumbai Fashion Week competition. Each season they select 5 young designers to showcase their work among established Indian designers at the country’s largest fashion event. In March, she launched a line of home products with the concept store Comptoir 102 in Dubai – the launch was done in collaboration with ART DUBAI (art fair).

In May, she presented her collection in New Zealand as a finalist for the iD International Emerging Designer Awards 2018. Over summer, she was awarded the Gold Prize for Textiles in the (IDA) International Design Awards and also took part as a finalist in the Feeric 33 New Talents competition. In September 2018, she had a New York Fashion Week showcase thanks to sponsorship by the CAAFD (Council of Aspiring American Fashion Designers). Upcoming projects include several capsules with major retailers in India and in the Middle East – one notably is the DIFC Gate Avenue, Design House project. They selected 13 young designers in the region through a competition and will be giving them a leasing space in the new development. 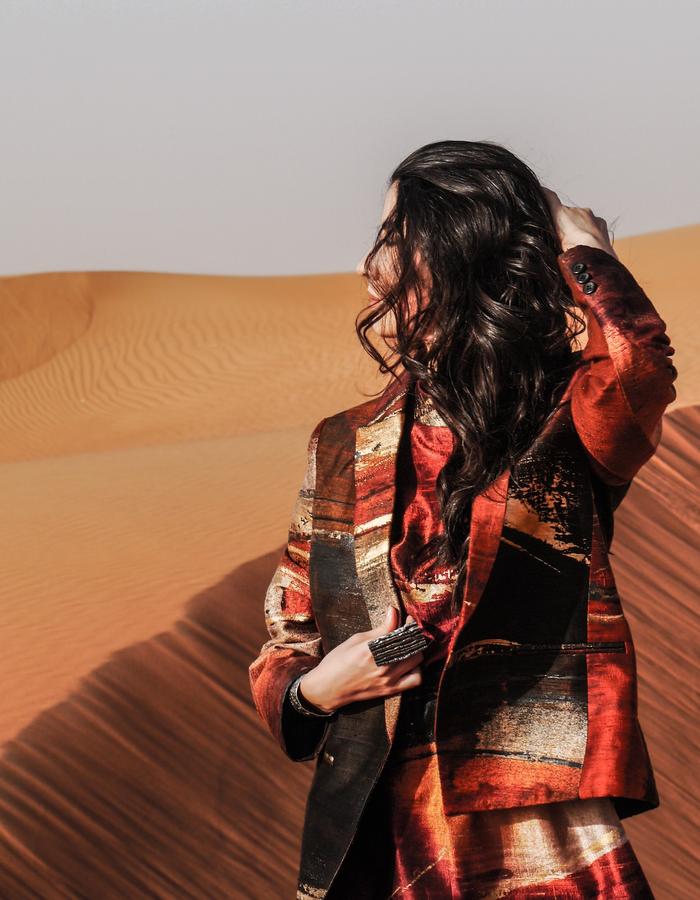