Founded in Paris in January 2019 by Naomi Gunther and Gabin Ducourant, GUNTHER is a men’s couture brand that showcases French know-how.
Naomi Gunther is a graduate of the Parsons School of Design. From the very beginning, she questioned gender by breaking codes and bringing feminine elements to the male wardrobe. Particularly attentive to the textures, colors and energies that surround her, Naomi Gunther defends an effortless chic style in all circumstances, enhancing refined materials and ancestral know-how.
Gabin Ducourant is a graduate of HEC, but it is immediately through image and verb that he chooses to define and express himself. After a foray into the world of advertising, he co-founded Undrglobe, a collective which «promotes one’s creativity to inspire that of others». He is now in charge of the Image Direction at GUNTHER. 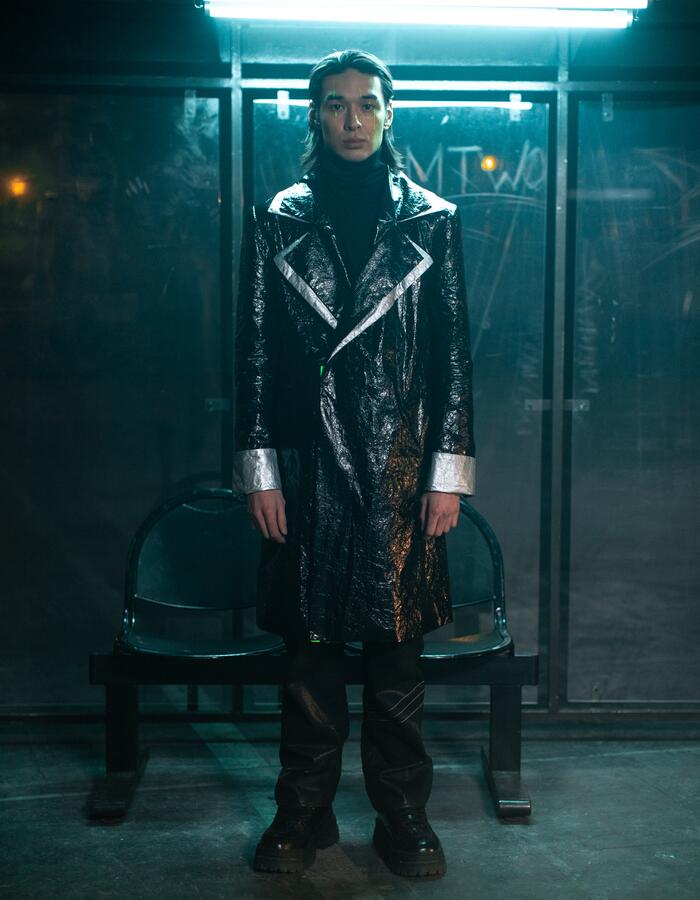 No Sleep In tokyo

Night falls in the land of the Rising Sun.
Order and calm are about to give way to decadence and extravagance.
Light has faded into darkness and sizzling neon lights are now flooding a fluorescent Tokyo.
While sobriety plunges into euphoria, reality takes on the appearance of pixels and the city tips over into another dimension.

The GUNTHER Autumn-Winter 2021 collection "No sleep in Tokyo" draws its inspiration from the day/night contrast of the Japanese capital. It is as much an ode to the minimalism of the city of Tokyo as to its nocturnal frenzy.
It suggests the order and calm of its streets during the day, their animation and their noisy atmosphere at night. The discipline of the pedestrians who stroll through its crosswalks in the morning, the madness of the night owls who populate its arcade or karaoke halls in the evening.

It was during a trip to Japan that Naomi Gunther became fascinated by the colors, sounds and electric atmosphere of the Japanese city. The silhouettes in the collection embody both a traditional daytime and a retro-futuristic night-time in Tokyo.
They evoke structure, elegance and sobriety through cold colors and straight cuts, and audacity, originality and vivacity by incorporating fluorescent velcro strips, silver GUNTHER patches and siliconized neon strips into the designs.
Modern and graphic, this collection surfs on the 80's wave of cyberpunk and retrowave and enriches the image of a non-standard city.

Once again, the attention paid to textures and materials is important for the brand which is Made in Paris: recycled cashmere and wool, organic cottons, vegetable ivory buttons are among the fabrics and supplies honored this season.

For this collection, GUNTHER is also collaborating with Japanese artist Yoshinori Tanaka - EXCALIBUR- (represented by the gallery Paris Tokyo) on two exclusive illustrations used as patterns and linings. Drawings of an animated, modern and pixelated Tokyo.