Guillermo Jester was born in Mexico City, studied Fashion Design and started working with indigenous artisans from many parts of Mexico since 2009, mainly in the state of Chiapas. He learned traditional textile techniques, such as back-strap and pedal loom, embroidery and iconography of different regions in Mexico.
He won the second place in Mexico Diseña by Elle Mexico 2017, the most important fashion reality show in Mexico, which supports fashion designers in the whole country. He also participated in 2014 winning the 1st place for the best man design, whom which Jean Paul Gaultier was one of the judges on the final.
Entrepreneur and founder of the unisex Mexican fashion brand Guillermo Jester, aiming to position Mexican artisanal design in the world, presenting his first collection in Milan, Italy. He had been published in many digital and printed magazines, such as Elle, L'officiel and Vogue Mexico Magazine and others.

The brand Guillermo Jester represents the cultural interlace between Mexico and the world, a vision of contemporary design with traditional indigenous textile techniques. A different perspective in a globalized world, where fair trade and to know the origin of each piece and the producers is essential.

The fusion between industrial textiles and fabrics made by indigenous artisans, with techniques as pedal loom and waist loom weaving, textiles natural dyed and hand embroidery. Based on the appreciation of the geometric silhouettes of traditional garments in a contemporary world, versatility in forms, textures and timelessness where gender and shape have no relevance. The bonding between the designs with the artisans is essential for the proposal, having an exchange of knowledge of fashion and craftsmanship represented directly in the garments. 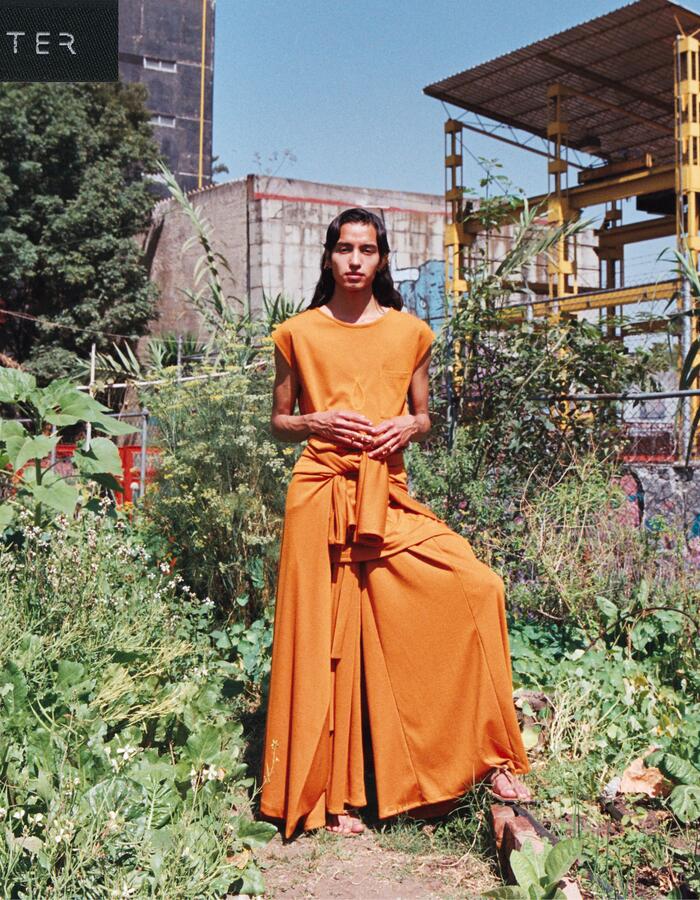 Means seed in Tsotsil and Tseltal, Mayan languages that are mainly spoken in the Highlands of Chiapas, Mexico, region where these pieces were created.
From the previous collection where the main element was the mountains, on the same axis we moved to agriculture and mainly to seeds, basing our research on how they are represented in the traditional indigenous iconography of Chiapas and how agriculture is introduced from the villaged to the cities.
In this collection the rhombus is used as one of the main elements since it is related to agriculture in Mayan textiles and also refers to the center of the earth where the seed is sown as part of the first stage of the agricultural cycle. In addition, the land for cultivation is linked to the feminity and the idea of fertility, interpreting the rhombus as an expression of agrarian worship represented in all traditional techniques and being related to the fertility of women and also from the land.
Elements of the crop are reinterpreted as the plowing of the land on hand-pleated canvases, applying traditional motifs and illustrations of embroidered plants and seeds, as well as brocades on a loom and the reinterpretation of traditional shirts and garments. Using more feminine silhouettes inspired by the concept of fertility and the earth, adapting it to a genderless aesthetic.
Collaborations made with artisans from Amatenango del Valle, Tenejapa, San Andrés Larrainzar, Chenalhó and San Juan Cancuc, in the State of Chiapas, México.