Guido Vera is a Publicist from the University of Arts, Sciences and Communications (UNIACC). After spending his childhood and adolescence in Punta Arenas, he moved to Santiago in 2010 to start his studies in communications, with the aim of linking this area directly with the fashion industry.

In 2012 he took a summer short course of Cool Hunting and fashion at the prestigious Central Saint Martins in London. This course, along with various activities he had at London Fashion Week that year, become the starting point of his career. Guido, after this trip, lands in his native Chile and immerses himself in the social media boom and starts his own blog; Thus, he begins to create content for local and international brands, writing tips and articles on his personal street style. With the latter, Guido has managed to establish a new perspective on the dress of Chilean men.

Guido has worked for over four years in fashion production, styling, parade and performance assistance. He is also creator of content for social networks with brands from the independent circuit.

In March 2018, he launched his self-titled project based in Santiago de Chile: Guido Vera, a unisex clothing and accessories firm. In May of the same year, Revista Paula conducts a double-page interview with volume

September 14th, 15th and 16th, 2018, he held in the city of Punta Arenas an exhibition of his volume I in the central nave of the new Cultural Center.

On October 1st, 2018 Inacap - Punta Arenas Headquarters- invited him to give a talk in the seventh edition of "Inacap Tour, creating value with social innovation" with a talk and workshop for students of the design career where he discussed the topic "Create from the territory". The talk was for Inacap teachers and students and open to the public.

On July 02, 2019, volume II "From The End of The World" was presented at Hotel Plaza el Bosque in Las Condes, Santiago de Chile in collaboration with Elite models Chile, MAC Cosmetics, JOICO, Saloon 2 and Park 17 of Hotel Plaza the Forest with Fran Straube from Rubio Music who gave life to the catwalk.

In September 2019, the Guido Vera firm was chosen and invited to participate in the Who's Next international fair in Paris by Atelier Meraki, an emerging talent incubator with only headquarters in Paris and led by Sherif Sy. Then, on the 27,28,29 and 30 of the same month, he was selected by Atelier himself to present his collection at PREMIERE Classe, Paris.

In March 2020, together with Pro Chile and Pro Chile Mexico, the firm was able to land in Mexico City to attend the American Caravan, a fair that promises to market the best of Latin American design. Guido participated with pieces from VOL II and a preview of his pre VOL III.

In 12th june, guido was invited by the russian fashion council to show his volumen III at @mbfw russia, first online version. 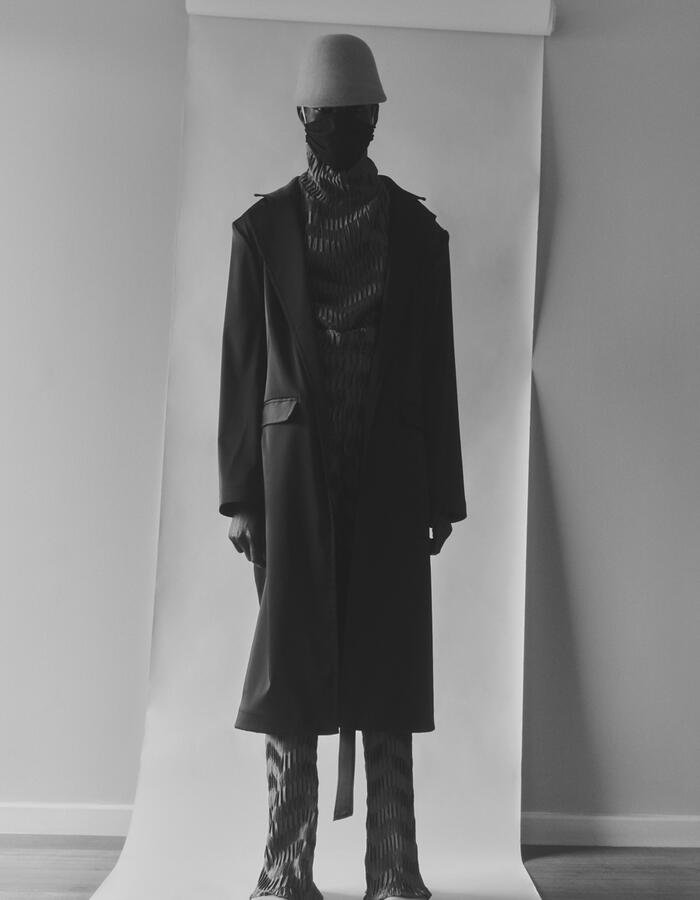 GUIDO VERA is a brand of ready-made clothing from Santiago de Chile, designed for modern nomads. Their collections are made in the minimalist style of cotton and high-tech fabrics, as well as vinyl based on PET bottles. “Simple design for complex minds,” is the brand's motto.

Their new collection “On the road. Issue 3” (Volumen III En tránsito) talks about the drought in the Antarctic and the melting of ice in Patagonia, about aridity and global warming. The region and the city of Punta Arenas falls into the zone of operation of a large hole in the ozone layer, so the issue of global warming is very relevant for this region. To draw attention to this problem, the author of the collection turned to textures symbolizing the death of fauna as a result of man-made drought. The natural resources of northern Chile inspired him to use faux fur and recycled plastic materials. In addition, the collection features natural Peruvian cotton.

Accessories were created in collaboration with Chilean designers: for example, with the participation of the designer of the Daltónico brand, a headpiece was developed in the tradition of non-waste production of the GIRARDI hat factory; while with the help of Constance Gonzales, woven bags were made from recycled car tires. The brand's new collection hopes to therefore reinterpret the principle of sustainable fashion by relating global concerns to a regional climate issue.