Students' cooperative situated in Zagreb, Croatia. We are focused on production of high quality hand-made clothing items and accessories based on ethical and slow fashion principles. 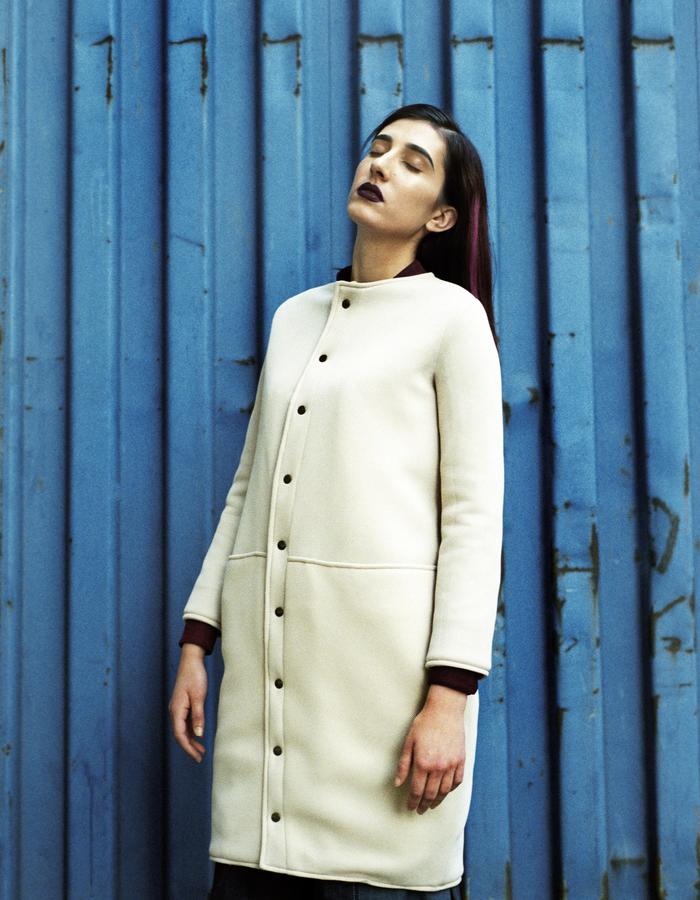 The new Fabric8 co-op collection was designed by Vladimira Pavlović and Dominik Brandibur, the jewelry was made by textile designer Helena Drkelić. Anđela Vidić is the campaign photographer and the models are Lada Brnetič and Leopold Rupnik. Make-up and hair are the work of Nika Dušak, and credits go to ORIS Kuća arhitekture for lending their space for the campaign photoshoot.

The collection is contextualized as a space for encounters, for dialogues that offer change and deliberation through a speck of time.
The clothings are agents in the whole process, serving as catalysts for thought processes and changing accordingly to these thoughts, keeping in mind the identity of the carrier whose clothes should be the reflection of his unchanging identity.
Encounters that are mentioned in this collection are a part of the discourse of the design in a broad sense, including its textures and fractures, space and volume, activity and passivity and, of course, the interaction of the inside with the outside. Through clothing we communicate, we adapt, we see the world with different eyes, she unconsciously becomes a part of our identity, just like we become a part of the clothing as well. In that way we identify human reflections with the tissue of the clothes while we simultaneously project fragments of our own character onto it.
As the starting point of this collection is the tactility of the clothing form which serves as a membrane between the body and the surroundings and also acts as an instrument of delimitation. Boundaries are human constructs, they are artificial zones of continual beginnings and endings and vice versa. It's a place of encounters and interference. The clothing in this collection talks about the similarities and identicalness that the human inside has split in pieces so that they could come together in form of a clothing piece.

A collection of unique, handmade jewelry made out of collaged and finely edge-stitched pieces of textiles that used to be leftovers. To prevent them from getting thrown away, the idea was to combine them again and make accessories out of them. I managed to get the idea by reading texts about the principles of shaping contemporary architecture, thereby trying to emulate the process of creating something with full-fledged freedom and finding a balance in creating opposite shapes and tones.