Evgenia Popova is a young womenswear designer, born and raised in Bulgaria. She received her first lessons in fashion at her grandmother's design studio where she learnt tailoring and pattern construction. Initially not focusing on fashion as a career choice, Evgenia studied for a degree in Economics and following graduation worked in a managerial position. She eventually made the decision to follow what she saw as her true calling in fashion and enrolled on a Foundation course at Barcelona's Escuela Superior de Disegno Y Moda. After graduating she was offered a place on the degree course in Fashion Design at London College of Fashion and so impressed her tutors that they advised her to concentrate on building her own label instead.

Spring/Summer 2014 is Evgenia's first collection under her label EVGENIA Popova. Evgenia has been accepted in the Centre for Fashion Enterprises esteemed New Market Entry programme in London that supported and advised her to run and grow her business. She received financial support by the European fund for regional development through an Bulgarian development programme. From 2014 to 2015 the company took part in the international trade exhibition WHO'S NEXT Paris.Evgenia was one of the designers selected from NOT JUST A LABEL to be part of the international platform ORIGIN PASSION AND BELIEFS in Vicenza, Italy May 2015.The aim of OPB is to bring together traditional and regional manufacturing houses with emerging design talents from the five continents. Evgenia was one of the designers selected to be part of the international showcased platform FRESH in FLORENCE that gives opportunity for young, contemporary brands to have a presence during one of the most important events Pitti Uomo. Evgenia has been teaching the course "Versus – Contrast as a concept in fashion and design" at New Bulgarian University. 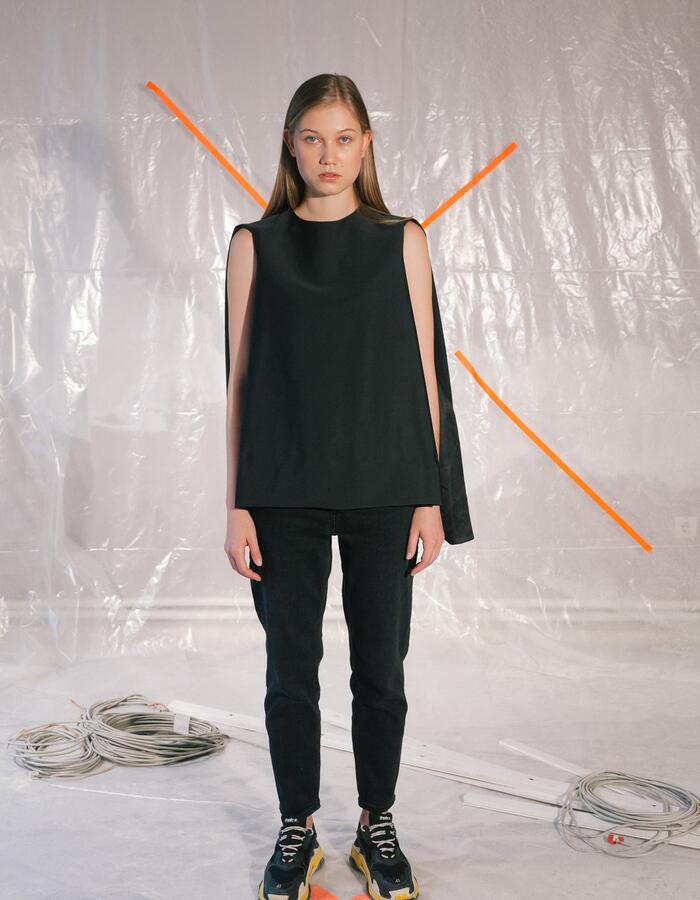 Black loose –fit sleeveless tunic decorated with side silk inserts .The perfect pick for a smart-casual look. Featuring a round neck, a back button fastening, dropped shoulders, button cuffs, drop back ,a trapeze body and an oversized fit