Since he was a child, he has always been interested in design, art, photography and architecture, among other things. So he began my degree in Architecture in Granada, but he didn’t like it enough and for this reason he decided not to carry on. One year later, he started a Graphic design course and in 2010, I began Pattern design in Granada. In 2012, I went to Milan to do an internship in a classical tailor shop.

He began to study fashion design in Madrid in 2012. During your studies he made small capsule collections to walk in fashion shows and fashion contests in Malaga.

He showed his work at the Museo del Traje in Madrid and he had worked with Moisés Nieto.

In June 2016 he finishes his studies in ESDMadrid and he show their Final Work Studies with MANIFIESTO SS2017 collection. Moreover, this collection was presented in the September edition of Mercedes-Benz Fashion Week Madrid at SamsungEGO Fashion Talent.

Also, his designs have dressed artist like Paco Leon, Recycled J, David Bisbal, Veronica Echegui, Blas Canto, Brisa Fenoy, Alvaro Morte or Sandra Martin. In September 2017 he presents LOS ODIOSOS 1718 collection in the OFF of Mercedes-Benz Fashion Week Madrid in Palace of Santoña and in July 2018 he presented LOS AMANTES in Samsung EGO at MBFWM.

EUPHEMIOFERNANDEZ concept is a fashion brand based on art, architecture, textile innovation, shapes and volumes, the pattern transformation and garment construction.

The EUPHEMIOFERNANDEZ’s philosophy is based on the variation of the established, to destroy before was built and create new, innovate and avant-garde concepts. The main idea is to give aesthetic meaning to exaggeration of figures, structures and volumes, according to the inspiration of the art, especially painting, of the aesthetic of the past, of the new artistic-creative process and the experimentation with the material.

A brand based on personal experiences, feelings and memories. 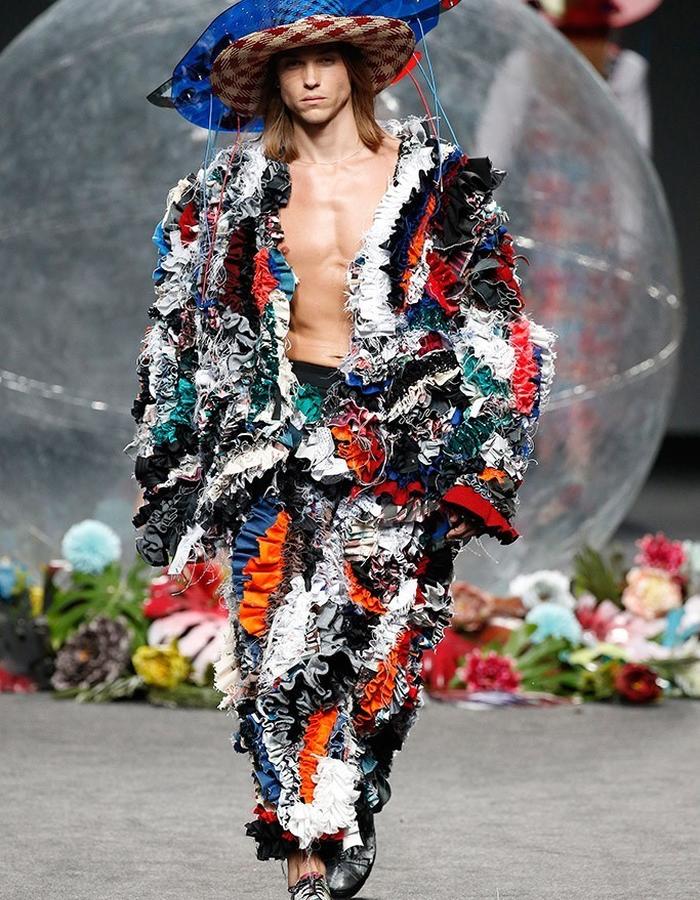 LOS AMANTES is the latest collection that closes the Trilogy of life inspired by my family's past, my memories and my artistic heritage. That closes the circle with the concept of childhood, innocence and love.

The collection comprises three generations: the time of my grandparents' wedding, that of their daughters and those of grandchildren. The aesthetics will have silhouettes, shapes and reminiscences of these years. Unisex aesthetic and character garments timeless. The links in common between the previous collections will be through the poems my grandfather wrote to my grandmother and her daughters for the prints. Poems that are included next to a handmade collage of old photographs and different treatments.

The use of the concept of the flower and its petals included in the garments through ruffles and openings and the creation of new tissues. Machine embroidery are included in corsets and other garments. Classic tailoring, large jackets, patterned feathers, large blazers or dresses with openings and large fabric and ruffled rosettes. And the reuse of remnants of all the collections of this trilogy to create garments of great aesthetic load thanks to the volumes and different textures that are created.