The design concept is central to Eleni Kyriacou's work. She aims to translate the essence of the design concept into fashion through innovative use of textile and form. She is characterised through her sensitivity and originality in her use of texture and her architectural design language. She believes in creating inventive garments that are also wearable.

Eleni Kyriacou launched her womenswear label in October 2011. She has since participated in Paris Fashion Week (for which she received support from The UKFT and The UKTI) and The Official Athens Fashion Week,

She is the current costumier of The Olympic Torch Lighting and Handover Ceremonies. She debuted her costumes for The Rio 2016 Summer Olympics.

Asides from her brand Eleni Kyriacou also works as a collaborative designer for other brands such as The London Sock Company.

Eleni Kyriacou originally studied architecture at The Bartlett, UCL and textile design at Central Saint Martin’s, where she won a prize for best design for sustainability. She also apprenticed for the late Alexander Mcqueen.

Eleni Kyriacou is a London born Greek Cypriot. Her studio and production is located in Athens. 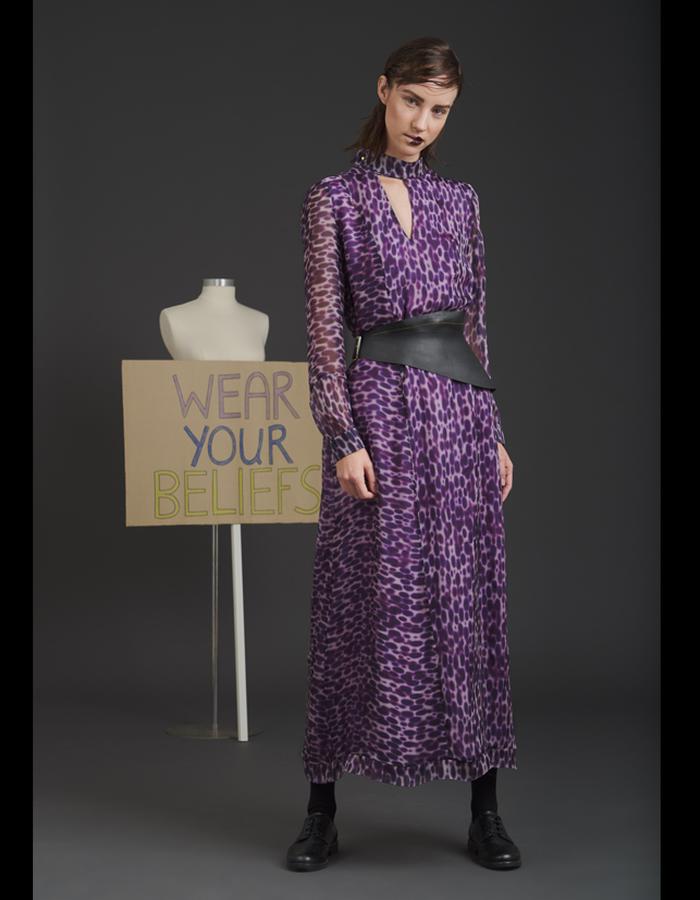 This collection is designed around the personality of Suzanne, the muse of this collection. She is fiercely intelligent, politically engaged, an environmentalist and interested in exploring her masculinity as well as her femininity. She feels her activist causes are not bound by a particular class or social group but are concerns for all. Her dress therefore exhibits her love for intelligent and inventive design. She wears her beliefs when she wants by taking the opportunity to use every day dress as a demonstration banner. She loves ‘up-cycled’ fashion and bringing materials into her dress that are reclaimed, otherwise non-recyclable waste. She also dresses in a way where she feels free to explore gender fluidity and fluidity between social classes. A refugee, coming from a war-torn land, Suzanne is an advocate for peace, justice and equality. She brings activism, both political and social, into her every day dress, in a way that is completely wearable. This collection therefore uses materials and surface patterns commonly used in every day womenswear and menswear, such as denim, pinstripes, florals and animal print. Text has been integrated into print. One example is where text is integrated into pinstripes referencing lined paper. Polyesters and plastics have been virtually avoided in the collection. Fabrics used are cotton and silk. This collection also extensively uses reclaimed inner tubes in its material palette. Inner tubes are otherwise 100% non-recyclable waste. They have been used in this collection to create belts, gloves and bracelets. Those quoted in the collection include US Congresswoman Ilhan Omar, who is herself a refugee and US Senator Bernie Sanders, a son of immigrant parents. Those quoted are involved in political and/or social activism. QUOTES USED IN THIS COLLECTION Never, ever lose your sense of outrage. - Bernie Sanders Change takes courage. – AOC I have a great sense of who I am. - Ilhan Omar I'm real. I'm not polished. - Richard Ojeda If you don't have a seat at the table, you're on the menu. - Richard Ojeda Let's not hide misguided policies. Let's not hide history. Let's not hide who we are and what we are doing. - Chelsea Manning There's politics in all aspects of our daily lives. - Michael Moore There’s nothing pragmatic about an incremental solution to a catastrophic problem. – Ron Placone (The Jimmy Dore Show) Do not bend yourself to make others feel taller. - Rose McGowan