Today, one in seven people amongst us are a migrant. This year, crossings of the Mediterranean Sea have already exceeded 300,000 and at least 2,500 lives have been lost in the process. Right now the crisis is closer to our borders as thousands of refugees scramble to find safety in Europe. NJAL asks its global design force: what does it mean to be a migrant – or a refugee – in our time? What human rights can we rely on? And what hope is there for those who have fled their homes?

It’s totally undeniable – there’s a humanitarian crisis unfolding at Europe’s borders and across the world where thousands of refugees and migrants are perishing en route to seek out a better life in Northern Europe. It’s a subject that demands critical attention and more pertinently, action. By the end of April 2015, the UN estimated 6.5 million people had been displaced in Syria, while more than 4 million refugees had fled to countries such as Lebanon (1.2 million), Jordan (608,000) and Turkey (1.75 million) plus thousands more in Europe and these numbers are only spiralling upwards.

In the decadence of fashion month, with its medicinal injection of thrill, fancy and indulgence, celebrating your own hard work as a designer can be somewhat hard to swallow. Designers might not be global policy decision makers but we are all humans with the capacity to activate change, raise awareness and pique compassion. From donating to a charity to volunteering, NJAL looks to designers aiding the refugee crisis in practical and accessible ways. 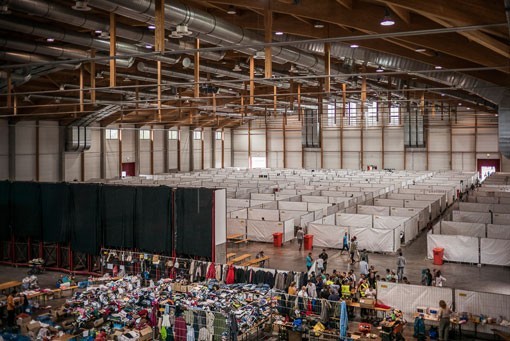 While some countries are opening gymnasiums, barracks and homes to refugee families, other countries are laying down barbed wire on their borders and closing their gates. NJAL’s friend and photographer Thilo Ross has documented just a small fraction of the efforts organised by the German Red Cross, led by Miss Caroline Greiner, CEO of DRK Heidelberg. With the support of different companies and social workers, doctors, volunteers, city and state organisations, the German Red Cross has opened up a fair hall in Sinsheim near Heidelberg, best known for its fair, a technical museum and the highly-lauded German first league football club TSG Hoffenheim.

The fair provided one hall for a limited time of six weeks to give 1,200 refugees a preliminary place to stay and a basic supply of clothes and food but also organised trips to registration offices all over Baden-Wuerttemberg to have people registered and gain support for asylum and passport issues. Heidelberg provides another three places like this, including former American military compounds, with solid housing facilities and shuttle transports to the town to give people more access and a chance for real integration into daily German life. 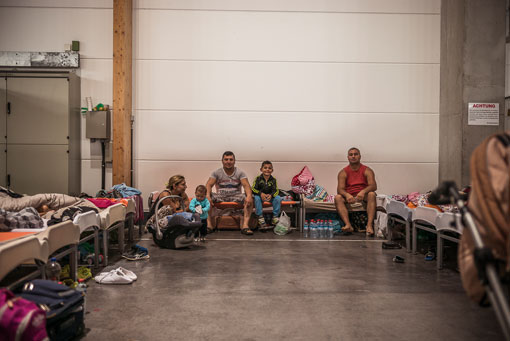 For Vaida Pilelyte, head designer of Greece-based label V Society, the crisis has piqued more than just a tug on the heartstrings. “I think that the most important thing is for all of us to do something about it. No matter how little we might think we have, even donating a T-shirt that you are not wearing anymore might mean the world to someone who has absolutely nothing and needs to start over in life,” explains the Lithuanian-born designer. It’s a double-edged dagger loaded with irony considering fashion's connotations of superficiality. Yet fashion in its most basic sense remains a form of protection from the elements. Clothing is also some of the most urgently needed stock for incoming refugees to Europe as well as in Lebanon, Turkey and Jordan.

Vaida urges fellow designers to reach out to grass-root activist groups or charitable organisations who are managing donations for refugees and migrants. “I talk with my neighbours about it, I talk with the people I work with about it and I shout on the Internet about it,” explains Vaida when questioned how she is raising awareness. While it’s easy to discard of the clothes we rarely wear, it’s important to make sure that you consult with the organisations managing donations to efficiently identify the things that they really need. “Pots and pants, tinned food, colouring pencils and exercise books so the children can start school as soon as possible. That’s what is needed. Men’s shoes too. It breaks my heart, and when I tell this to people – they’re all determined to chip in somehow,” says the designer. 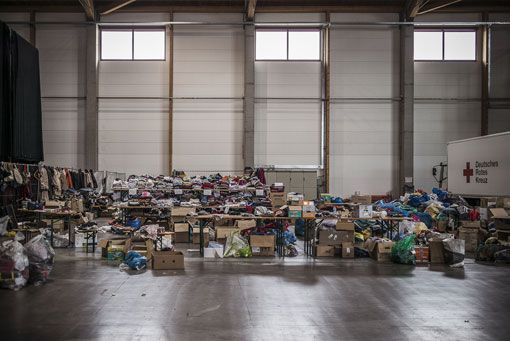 Donations, including everything from money to utensils, are all practical and helpful ways to aid the crisis but any capacity for tectonic change of course lies with our nation’s leaders and a collective responsibility to provoke action. Yet the problem is tangled, as it requires an entire continent to respond and not just sole governments and emphatic civilians. While the EU at its core claims to epitomise humanity and solidarity, Hungary’s recent decision to fire tear gas and water canons at women and young children is a gross violation of human rights and it reflects the EU bloc’s totally fractured response to the crisis at large.

Vaida suggests that “this may be the first migration revolutionised by the Internet” and that’s a sour symptom of modernity. People have long trekked through the Balkans to the EU but Syrians were not previously among them. Last summer, that all seemed to change when the first few Syrians found the Balkan route to Europe. Those trailblazers told their friends, who told their friends, who set up Facebook groups about it and a phenomenon was born. Vaida asks, “As Europeans, how can we use the internet to facilitate action, aid the crisis and help refugees?” 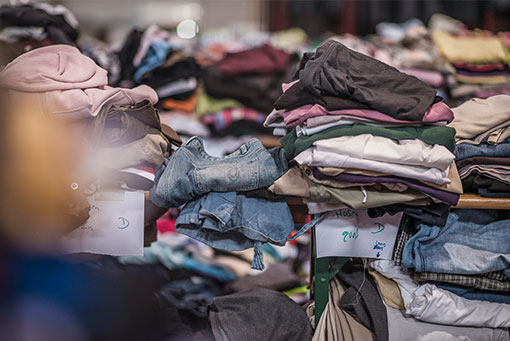 It’s a pertinent question and one that NJAL’s global cadre of digital natives should work to answer. NJAL is proud to be a global network and one that fosters communication and eradicates borders. Where NJAL’s designers have found extraordinary ways to circumvent obstacles that might censor their creative output in politically unstable countries, they should also apply that tenacity to find practical ways of using the Internet in similarly inventive ways to aid the crisis.

This Google Doc titled How to Help Refuges in Hungary is an excellent resource that’s painstakingly updated to help people around the world buy rail tickets for refugees and migrants stranded at the Hungarian border. Since its inception, new immigration legislation has entered into force in Hungary and it strictly criminalises those forms of immigration it regards illegal. Yet, for a brief window of time, globally networked individuals could buy a train ticket online, send the code to a Hungarian volunteer who was at the station at that moment, who would then buy a ticket for those in need to cross safely into Austria. 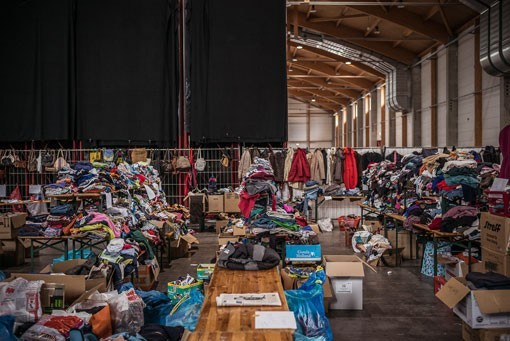 With borders now firmly closed, it’s led to the use of less safe passages towards the EU. Some refugees remain stranded in Serbia at the Serbian-Croatian borders with thousands of them waiting in different Croatian towns to be transported to Hungary, with another couple of thousand taking to camps in Slovenia and tens of thousand being escorted through Hungary towards the Austrian border. Though the Google Doc is a digital resource, it’s one engineered by the volunteer organisations on the ground who are very effective at finding out where the need is the most urgent and organising relief aid to those places. They are in close collaboration with Serbian, Croatian, Slovenian and Austrian volunteers and NJAL urges anyone who can to help their valuable work by looking through the document and choosing the way that best suits to support their efforts. 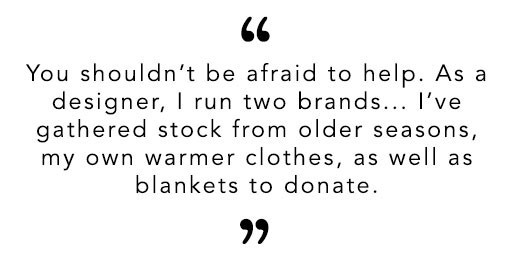 For Vaida Pilelyte, this means using her position as a globally networked designer to her advantage and sharing information as wide and far as possible. More importantly, she warns that, “You shouldn’t be afraid to help. As a designer, I run two brands, one of them is high street so the clothes are more practical. I’ve gathered stock from older seasons, my own warmer clothes, as well as blankets to donate.” It’s the essentials that matter and many designers have the capacity to simply donate surplus stock or use their privileged positions as hyper connected individuals to share critical information on organisations via social media channels with infinite, global reach and influence. 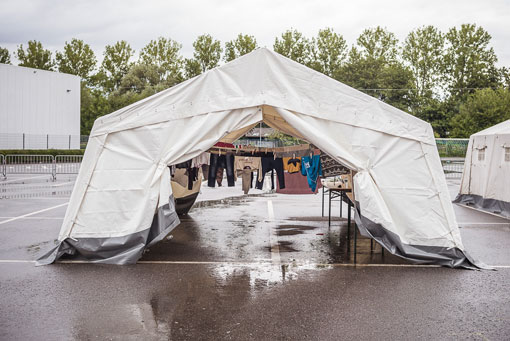 It’s undeniable that the surge of Syrian refugees into Europe has seized world attention but the hundreds of thousands of much poorer, less educated newcomers who have also fled dire circumstances in Africa seem largely marginalised in global media coverage. It requires us to return to the question of what it means to be a migrant in our times and what human rights can this diverse group of migrants rely on? For Branko Popovic, co-founder of Fashion Clash, it requires us to move beyond the 'refugee' and begin to understand these people as actual human beings. “We should face the crisis by looking at it as an opportunity and not as a problem. I fled to the Netherlands in 1995 during the Yugoslav War. We took the same road through Hungary and ended up in the Netherlands and struggled for a few years until we were given permission to stay. Now 20 years later, I’m quite successful here and I contribute to society and I assume many people in my network are unaware of my refugee past. People don't get to hear 'success stories' and the media is a part of perpetuating that problem but there is hope,” explains Popovic.

It’s not all dismal and despite so many refugees having fled their homes with nothing but the clothes on their backs, many who have resettled in camps in Jordan have reclaimed a sense of purpose with savvy entrepreneurism. The Za’atari Refugee Camp in the middle of Jordan’s Mafraq desert is a prime example. It’s a gradually evolving permanent settlement for more than 93,000 refugees where the main market street is playfully referred to as 'the Champs-Élysées' and has grown into an active micro-economy worth about $12.7 million per month, hosting a growing number of shops selling fashion and accessories. 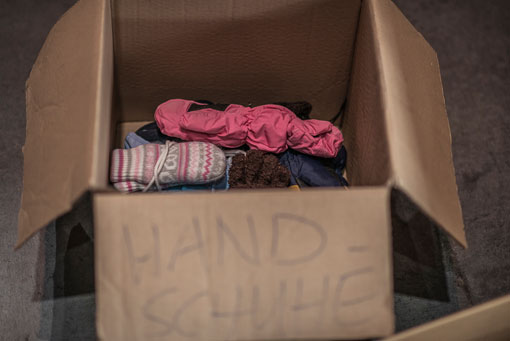 However, this is far from reality for most and, for the latest influx of migrants desperately seeking refuge in Europe, it’s the collective humanity of the continent that they will have to rely on for resources to build a new life. The current refugee crisis remains global and media perpetuation too often obscures this cold, hard fact. The recent coverage, especially in the UK, has focused heavily on the refugees arriving in Europe and more especially on Syrian refugees. Yet, refugees are fleeing countries from Honduras to Nigeria to Myanmar and they are arriving in wealthy countries including the US and Australia as well as poorer ones like Turkey and Lebanon. It is a global problem — one whose scale and severity is unmatched since World War II. This demands a pan-global response from the economic superpowers and the clout of powerful continents, namely Europe and North America, to take action as well as affluent Arab states to do their equal part in solving this devastating and very human crisis.